Posted on December 3, 2020 by William Brighenti 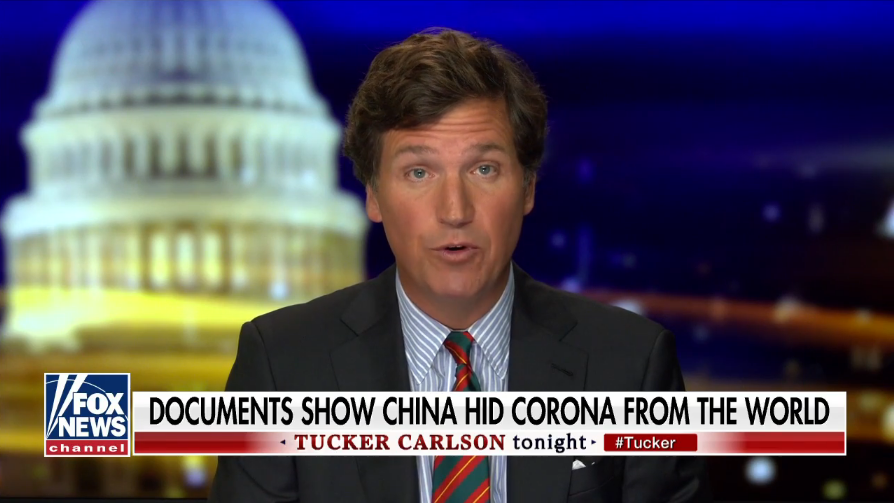 Tucker Carlson: The coronavirus pandemic is a global fraud perpetrated by China, abetted by the powerful

More than a year into the pandemic, we still don’t know its full story

You’ve heard a lot recently about “voter fraud” and “election fraud.” But now comes more profound news, of a global fraud that began long before Election Day and has ruined millions of lives, killed hundreds of thousands, and deeply affected the outcome of our presidential election.

We speak, of course, of the coronavirus pandemic. Simply put, we’ve been lied to.

The latest evidence comes from samples collected during Red Cross blood drives last year and analyzed by the Centers for Disease Control and Prevention (CDC) in a study published on Monday.

Researchers tested 39 blood samples from California, Washington and Oregon that were collected between Dec. 13 and Dec. 16, 2019. At the time, no one in the United States had heard of COVID-19. The Chinese government didn’t even acknowledge its existence until Dec. 31. And yet, every one of those samples came back positive for coronavirus antibodies. Keep in mind that antibodies don’t develop for at least a week after exposure to the virus.

That means the human coronavirus was being transmitted throughout the American population far earlier, possibly months earlier, than we were told. We don’t know yet how it happened, but we know for certain that it did.

The CDC has found dozens more positive samples from blood tests taken beginning at the end of December, and they found them in many other parts of the country — in Michigan, Iowa, and Massachusetts.

Analysis of tests in other countries has shown even earlier spread. Scientists now know the coronavirus spread to Italy as early as last September and to South America two months later, in November.

So clearly, what we have been told for almost a year about the origins of the coronavirus is not true. Why are we just learning this now, a month after a presidential election? We’ve had reliable antibody tests since the summer, yet no one thought to test Red Cross blood samples until now? Why weren’t elected officials demanding a coherent account of where this virus that has changed American history forever came from, how it got to the United States and how it spread through our population? Why don’t we know that yet?

Because nobody seemed to care. Our elected officials were too busy enjoying their newfound power. They were shutting down small businesses and arresting people for kayaking without masks.

Back in January, 11 months ago, the Department of Homeland Security warned that American airports could be ground zero for a new pandemic, but Congress yawned. On Jan. 24, a day when, these blood samples now prove, the virus had already spread across the continent, the Trump administration held a classified briefing on the coronavirus for the entire U.S. Senate, but only 14 senators showed up for it. Why? Well, Jan. 24 was the final day of House Democrats’ opening statements in the Senate impeachment trial of President Trump.

So the people in charge of protecting the country were not worried about coronavirus, but were standing in front of their mirrors rehearsing the moment when they could finally confront Alan Dershowitz about the dreaded Zelensky phone call.

Now they’re claiming the pandemic caught them completely by surprise. How do they get away with that? They get away with it because our public health establishment gives them cover and has all year. Two days before that classified Senate briefing that only 14 senators showed up for, Dr. Anthony Fauci went on Fox Business Network’s “Bulls & Bears” to reassure Americans they could trust the Chinese government.

FAUCI: From what I can see right now, they really are being much, much more transparent than what happened with SARS, where they really kept back information for a while. It was embarrassing to them. They’re really transparent now. They put the sequence of the virus up on the public database right away. So in that respect, they’ve been transparent.

In a well-functioning country, a line like that would ensure that you never work in public policy again. China has in fact been transparently dishonest about the virus. Beijing officials are now claiming the virus came to their country from somewhere else, that it arrived in frozen food, possibly as a bioweapon staged by the U.S. military. They’re not saying this in secret. They’re saying it on social media. But so far, Twitter hasn’t bothered to fact-check that claim. Like Fauci, Silicon Valley trusts China far more than they trust you.

Ron Klain, Joe Biden’s pick for White House chief of staff, told Axios on Jan. 27 that China has been “more transparent and more candid than it has been during past outbreaks.” Why did Ron Klain think that? Possibly because the World Health Organization told him to think so.

On Jan. 8, the WHO — funded, of course, by the Chinese government — released a similar message: “Preliminary identification of a novel virus in a short period of time is a notable achievement and demonstrates China’s increased capacity to manage new outbreaks.”

In other words, the rest of us ought to be thanking the government of China for the blessing of COVID-19. A week later, WHO was back with more demonstrably untrue propaganda straight from their overlords in Beijing.

That was yet another dangerous lie that unquestionably cost American lives, but Twitter didn’t fact-check that either. Instead, the American media dutifully amplified the message. They told us anyone who suggested this thoroughly Chinese virus came from China was, by definition, a racist. So thorough was the news blackout on the Chinese origins of this virus that you had to go to Australian television to find out what was actually happening.

A few weeks ago, “Tucker Carlson Tonight” interviewed a Chinese virologist, Dr. Li-Meng Yan, who fled her country with this message for us: This virus came from a government lab in China. She said she knew that in her own country she would have been punished, possibly killed, for saying so. So she came here, to the land of the free. What did she find? She found her words censored by American tech companies working in tandem with the tyrants she fled.

Internal documents now prove that Chinese officials knew they were facing a coronavirus pandemic — something they’d never seen before — but they hid that information from the world and they arrested those who tried to report it. More critically, millions of people continued to travel through the city of Wuhan in central China, the epicenter of the pandemic. Then more than a million Chinese citizens flew to the United States. It wasn’t until Jan. 20 that Chinese President Xi Jinping finally admitted the virus could be contagious. At best, that’s criminal negligence. At worst, it’s something like mass murder.

But no, said the WHO. In fact, it was just more evidence that the Chinese Communist Party was doing an extraordinary job managing the pandemic.

DR. BRUCE AYLWARD, WHO SENIOR ADVISER TO THE DIRECTOR-GENERAL, MARCH 25: Right now, there’s very, very few countries that have actually been able to reverse this epidemic and bring their cases down to [a] very low level. And in fact, the only country that has done that is China. It was the passion, the diligence, the sense of responsibility, the seriousness of the average Chinese — and I want to use that term very carefully because they weren’t average. They were extraordinary people, but they were driven by a sense of collective responsibility.

Got that? The Chinese are driven by “a sense of collective responsibility.” Contrast that with us fat, lazy Trump-voting Americans. We demand to go to church on Sundays or go out to dinner with our families once in a while and then deservedly, we get sick and die. Not Xi Jinping and the obedient communist nation he leads. They found a better way.

That’s the message from the media, our health establishment, and our elected officials, and it has been for almost a year. But it’s not the whole story. We know that now. We’re still not even close to knowing what really happened. We should find out.

William Brighenti is a Certified Public Accountant, Certified QuickBooks ProAdvisor, and Certified Business Valuation Analyst. Bill began his career in public accounting in 1979. Since then he has worked at various public accounting firms throughout Connecticut. Bill received a Master of Science in Professional Accounting degree from the University of Hartford, after attending the University of Connecticut and Central Connecticut State University for his Bachelor of Arts and Master of Arts degrees. He subsequently attended Purdue University for doctoral studies in Accounting and Quantitative Methods in Business. Bill has instructed graduate and undergraduate courses in Accounting, Auditing, and other subjects at the University of Hartford, Central Connecticut State University, Hartford State Technical College, and Purdue University. He also taught GMAT and CPA Exam Review Classes at the Stanley H. Kaplan Educational Center and at Person-Wolinsky, and is certified to teach trade-related subjects at Connecticut Vocational Technical Schools. His articles on tax and accounting have been published in several professional journals throughout the country as well as on several accounting websites. William was born and raised in New Britain, Connecticut, and served on the City's Board of Finance and Taxation as well as its City Plan Commission. In addition to the blog, Accounting and Taxes Simplified, Bill writes a blog, "The Barefoot Accountant", for the Accounting Web, a Sift Media publication.
View all posts by William Brighenti →
This entry was posted in Accountants CPA Hartford, Articles and tagged 39 blood samples positive for coronavirus antibodies, Blood tests reveal that the Coronavirus COVID-19 originated before September 2019 and China knew and hid its origins, CDC study, Chinese President Xi Jinping, coronavirus pandemic, COVID-19 a 'global fraud' by China that cost American lives, Dr. Anthony Fauci, Dr. Anthony Fauci went on Fox Business Network's "Bulls & Bears" to reassure Americans they could trust the Chinese government, DR. BRUCE AYLWARD, Dr. Li-Meng Yan, global fraud, italy, More than a year into the pandemic we still don't know its full story, Ron Klain, Ron Klain Joe Biden's pick for White House chief of staff told Axios on Jan. 27 that China has been "more transparent and more candid than it has been during past outbreaks", South America, The coronavirus pandemic is a global fraud perpetrated by China abetted by the powerful, WHO.. Bookmark the permalink.