Posted on December 2, 2020 by William Brighenti 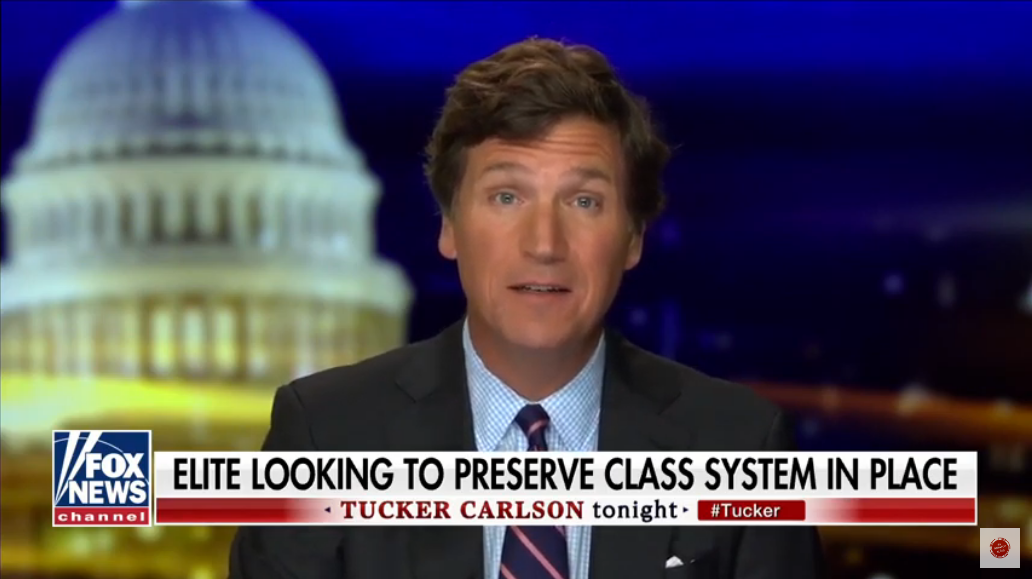 Tucker Carlson: The ‘diversity’ delusion and the destruction of the American meritocracy

Imagine for a moment that you were an incompetent public official, and you didn’t want anyone to know you were incompetent. What would you do?

Well, your first task would be to destroy the meritocracy, the system that rewards people in this country for their effort and their talents as opposed to rewarding them for irrelevant criteria like how they look. A meritocracy is the main threat to incompetent people. It keeps them from getting rich and powerful, so they hate it.

Now, feminist groups are mad about this, says Politico — not because it would leave the country vulnerable, but because they want a female secretary of defense. According to these groups, the secretary of defense should look like them because it’s all about them, not about the Pentagon or the country or the military threats we might face in the future. It is about identity, which is to say it’s about narcissism. “When I see people in power, I must see myself.” That’s the demand, and not just at the Pentagon.

Here’s how Vox.com covered the race to replace Steve Mnuchin at the Treasury Department: “Lael Brainard, who is white [sic], is seen on Wall Street and by her skeptics on the left as the most likely Treasury secretary … Raphael Bostic, who would be the first Black and first openly gay Treasury secretary, is also receiving some consideration.”

Vox went on to note that some, “Hispanic Democrats” are upset that there are “no Hispanic candidates legitimately in the mix for the other three top jobs” in a Biden administration.

Hispanic, Black, gay — those are categories. They’re not people. They’re not individuals. This is about identity, not country. It’s about Balkanization, not unity. “Straight White men are the enemy,” says the party led by one, and so it goes. It’s hard to imagine anything uglier than this. This doesn’t go anywhere that you’d want to go. It ends with discord and worse, but it continues.

In other words, certain jobs for certain identities. Certain skin colors have pre-prescribed roles. How is this different from a traditional caste system? How is this better than the Jim Crow South? Those are fair questions, but no one ever asks them. Instead, the media just applaud.

You’ll notice at this point that no one ever explains what exactly diversity is, not with any precision. Yet diversity is now required by corporate America, or at least their definition of diversity is. The NASDAQ, for example, has proposed new listing rules that require companies to “have or explain why they do not have at least two diverse directors, including one who self-identifies as female and one who self-identifies as either an underrepresented minority or LGBTQ+.”

Not to be outdone, the bank Credit Suisse announced it has created an index of 350 “LGBTQ-inclusive companies,” and they will, of course, be rewarded accordingly.

Think this through for a minute. There’s a lot of money at stake here with these definitions, and a lot of power that attaches. At some point we’re going to need highly specific ways to verify that the people who are benefiting from these categories deserve to, that they are indeed women (whatever that now means) or that they are legitimately LGBTQ+. What does all that verification look like? Blood tests? Home monitoring? We’ll find out at some point, unfortunately.

Janet Yellen doesn’t seem worried about that. Yellen is Joe Biden’s pick for Treasury secretary, and she’s mindlessly on board with all of this. She’s rich enough to be. Here’s Yellen explaining that eliminating hard-to-define social disparities is a central goal of federal economic policy going forward:

YELLEN: We risk missing the obligation to address deeper structural problems –inequality; stagnant wages; racial disparities in pay, job opportunities, housing, food security, and small business lending to deny wealth-building to communities of color; gender disparities to keep women out of the workforce and keep our economy from running at full force. It’s a convergence of tragedies.

The idea, if you weren’t clear, is this: Everybody pays money into the federal Treasury, but only some people benefit, depending upon who Janet Yellen thinks should benefit.

But step back a few feet. Everything Yellen said is the opposite of the actual truth. If you’re actually in favor of diversity, real diversity, you’ll notice that the diversity measures they’re proposing won’t make anything more diverse.

These proposals are merely a way for the people in charge to hire more of their friends. What you’re seeing is an attempt to preserve and codify the class system that is already in place and is growing more rigid by the day. If you really want to flatten America’s social structure, you would demand a return to meritocracy. You’d want a system where anyone, no matter where they were born or what they look like or who they slept with, could succeed. That’s what we used to have, but it’s the opposite of what the left is now demanding.

If you really wanted to make companies more diverse, you would try to actually diversify them. You would hire people who were not in any sense like you, people with actually different backgrounds. You could hire more people with technical degrees, for example, and fewer who studied marketing or communications. You’d find people who lived in rural zip codes. You’d seek out employees who were deeply involved in their churches or owned guns, or who had close family members who died of opioid overdoses.

More than anything, on day one, you would put a cap on the number of employees who went to elite colleges. Let’s just start with the top 100 on the U.S. News & World Report annual list. You would put an outright ban on hiring Harvard, Yale, Princeton, and Stanford graduates. They’ve got enough representation to last for the next half-century. You’d make any previous employment at McKinsey & Company or any other absurd consulting firm instantly disqualifying.

You would look beyond race and sex to the cultural markers that actually matter and that actually determine later success in a class system. You would subtract points from any applicant who’d ever spent the night on Nantucket or Martha’s Vineyard or St. Barts, and you would add points to applicants who vacation in Branson or Lake Mead or the Florida Panhandle. You would start an aggressive affirmative action program for fat people, for deer hunters, for anyone who drives an American car or eats dinner while wearing a hat. Are those people represented on corporate boards? I don’t think so. Find a fat person in corporate America. There’s not one.

Our leaders are doing precisely the opposite of any of that, and it tells you everything. What you’re seeing is the ruling class pulling up the ladder as they always do, as all ruling classes do. How many of the people lecturing you about diversity come from exactly the same elite background? Pretty much all of them, so what they’re advocating for is people just like themselves.

We can give you 1,000 examples, but we’ll just pick one. Marcus Mabry runs global digital programing at CNN and has been around journalism forever. He’s now one of CNN’s most energetic diversity enforcers, but here’s the interesting part: Mabry himself went to high school at The Lawrenceville School in New Jersey. He got two degrees from Stanford. Then he spent decades at Newsweek, The New York Times and Twitter. So naturally, he claims to be highly concerned about inclusion. Here he is in 2016 lecturing his then-employer about it:

MABRY: There is a lot of work to do at Twitter and throughout tech, and that’s one of the reasons I came to Twitter, which is, I think it’s so important that we’re at the table. It was true of The New York Times, too. But we have to make more of us. We have to create more of us and not just African-American, but also Latino and Hispanics who are very much also underrepresented in technology and at Twitter … I’m convinced our current leadership is committed to improving that diversity, but there’s a lot of work to do.

Marcus Mabry, who is on the board of one of the most expensive boarding schools in the world, is fighting the man. Of course he is. It’s working for him and all his friends. It’s just not working for you, and it’s not intended to. You are excluded from their inclusion. But you knew that.

William Brighenti is a Certified Public Accountant, Certified QuickBooks ProAdvisor, and Certified Business Valuation Analyst. Bill began his career in public accounting in 1979. Since then he has worked at various public accounting firms throughout Connecticut. Bill received a Master of Science in Professional Accounting degree from the University of Hartford, after attending the University of Connecticut and Central Connecticut State University for his Bachelor of Arts and Master of Arts degrees. He subsequently attended Purdue University for doctoral studies in Accounting and Quantitative Methods in Business. Bill has instructed graduate and undergraduate courses in Accounting, Auditing, and other subjects at the University of Hartford, Central Connecticut State University, Hartford State Technical College, and Purdue University. He also taught GMAT and CPA Exam Review Classes at the Stanley H. Kaplan Educational Center and at Person-Wolinsky, and is certified to teach trade-related subjects at Connecticut Vocational Technical Schools. His articles on tax and accounting have been published in several professional journals throughout the country as well as on several accounting websites. William was born and raised in New Britain, Connecticut, and served on the City's Board of Finance and Taxation as well as its City Plan Commission. In addition to the blog, Accounting and Taxes Simplified, Bill writes a blog, "The Barefoot Accountant", for the Accounting Web, a Sift Media publication.
View all posts by William Brighenti →
This entry was posted in Accountants CPA Hartford and tagged Balkanization, Black, class system, CNN, Congressional Black Caucus, Credit Suisse, December 1 2020, Democratic elites are promoting a class system based on race and gender and sexual orientation, feminist groups, gay, Harvard, Hispanic, Hispanic Democrats, identity politics, Janet Yellen, Jim Crow, Lael Brainard, LGBT, LGBTQ+, Marcus Mabry, McKinsey & Company, meritocracy, NASQ, Princeton, Raphael Bostic, Stanford, straight white men are the enemy, Tucker Carlson, Yale. Bookmark the permalink.