Posted on October 30, 2020 by William Brighenti 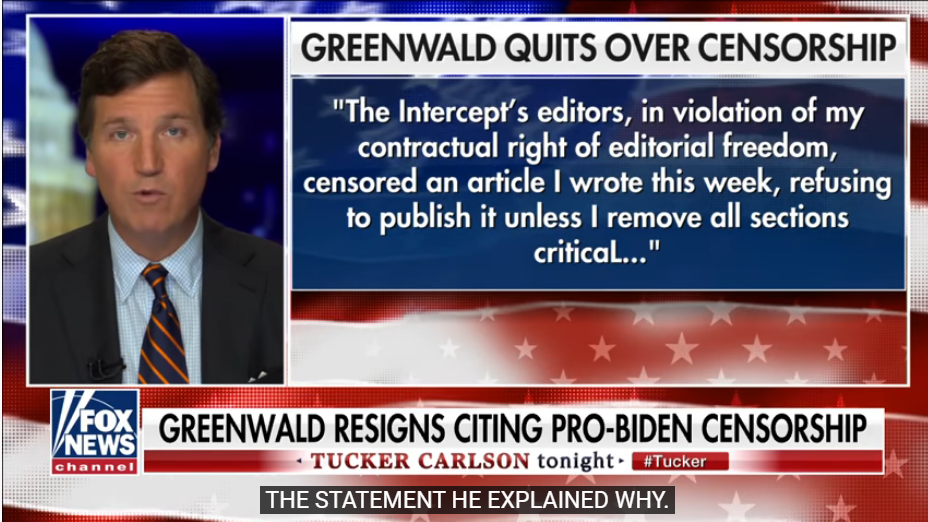 Tucker Carlson: Glenn Greenwald has thought a lot about that question. Greenwald is a traditional leftist. He’s committed above all to forcing transparency on people who hold power.

Years ago Greenwald co-founded a news site called the Intercept. Today he resigned. In a statement Greenwald explained why. Quote:

“The Intercept’s editors, in violation of my contractual right of editorial freedom, censored an article I wrote this week, refusing to publish it unless I remove all sections critical of Democratic presidential candidate Joe Biden, the candidate vehemently supported by all New York-based Intercept editors involved in this effort at suppression.”

And he went on. Greenwald’s full statement is up tonight at an internet platform called Substack, which is not yet censored. No matter who you plan to vote for next week, we recommend that you read it.

Glenn Greenwald joins us tonight. Glenn, thanks so much for coming on. The idea of you resigning from a news organization you helped found is stunning. Tell us why you did.

Glenn Greenwald: Well the news organization that I co-created was in 2013 at the height of the Snowden reporting I left the Guardian to do it because I was seeing that there were a lot of constraints imposed on journalism and their ability, our ability, to report freely against governments, against power centers, against all kinds of institutions that wield authority. And the premise of the news outlet, the core overarching premise, the reason it was created was to ensure that journalists would always have complete journalistic independence and editorial freedom, never have to pull punches journalistically or pay homage to pieties because of the preferences, the partisan or ideological preferences of editors, or of anybody else. That was the core founding idea and vision.

And then that is what makes it so amazing, that at the very outlet that I co-created that s built on my reputation, my credibility, my journalistic accomplishments, then tried to intervene to censor me six days before an election because I wanted to publish reporting and analysis about the evidence that raises serious questions about the conduct of the candidate that all of the editors at that outlet vehemently and enthusiastically support.

Tucker Carlson: I would imagine that some of our viewers don’t read the Intercept. You live outside our country, which is one of the reasons I think you say what you think is true. Tell us what this portends for the future here in the United States.

Glenn Greenwald: So the Intercept was actually for a while a unique publication, and I think the vision I just described as one reason but another was that it was intended above all else to be highly skeptical of the claims of intelligence agencies. At the time when we were doing the reporting, the attacks were coming from the NSA, the CIA, the Deep State against me, against my source, Edward Snowden, against the reporting. And we knew they were lying constantly and disseminating propaganda in a very powerful way. So we set out to say we’re going to investigate them; we’re going to be skeptical of them; we’re going to subject their assertions to critical scrutiny.

And I am so embarrassed and angered that the media outlet that I created along with two other excellent journalists to do that, the only article I published about all of these documents that have emerged about Joe Biden, other than a column of mine where I denounced Facebook and Twitter for censoring it, was an article that made reference in passing to those documents very snidely and dismissively to say that no one should pay attention to it because it was Russian disinformation. And it cited a letter from John Brennan, James Clapper, Mike Hayden, and the rest of the goons from the CIA in the intelligence community asserting it. And that letter said we have no evidence that Russia is involved in any of this.

The Intercept omitted that phrase, simply cited that letter to try and encourage people to ignore this evidence on the grounds that Russia had manufactured it and that the evidence was fabricated even though there’s never been any evidence for that that’s been true and everything since has disproven it, showing Russia was not involved in any of this and nobody certainly not even Joe Biden disputes that these emails are and other text messages are completely real and authentic.

Tucker Carlson: That’s horrifying. So what you’re watching is agencies of the U.S. government turning their awesome and unconstrained powers against the American population.

Glenn Greenwald: This is the real story of the last four years of the Trump administration, which is that for a long time on the left, there was a healthy skepticism of the CIA. There was a lot of anti-war activism in the Bush and Cheney years. That has all disappeared.

And the reason it’s disappeared is because the CIA from the very first days of the Trump administration, even before he was inaugurated, devoted themselves to sabotaging the administration because Donald Trump questioned just a few of their pieties. And that can’t be done in Washington. Whoever does that must be destroyed.

And so the CIA and the Deep State operatives became heroes of the liberal left, the people who support the Democratic party. They’re now in a full union with the neocons, the Bush Cheney operatives, the CIA, Silicon Valley, and Wall Street. That is the union of power along with mainstream media outlets that are fully behind the Democratic party, which is likely to at least take over one branch of government, if not all of them, with the coming election, and that is a very alarming proposition because they’re authoritarian, they believe in censorship, and they believe in suppression of information that exposes them in any kind of a critical light.

Tucker Carlson: For a U.S. government agency to try and disseminate propaganda within the United States, I mean is there any clearer attack on democracy than that?

Glenn Greenwald: So when we were doing the Snowden reporting, one of the things that brought Ed, induced Edward Snowden, to come forward as someone who had worked in the CIA, in the NSA, was his anger and horror that the tools of the NSA had been turned on the American people. They’re supposed to spy on foreign adversary governments. But they weren’t. They were collecting our phone records.

Same with the CIA. They’re trained disinformation agents. That’s what they do. They lie for a living but they’re supposed to do that in other countries where we want to induce some sort of change, overthrow a government, topple a regime, whatever, ” interference”, the U.S. government wants to do, the way we’re all so upset that Russia did in 2016. That’s what they’re trained to do.

Go turn on any of those other cable networks, or pick up the op-ed page of any of the biggest newspapers, and all you’ll see are ex-members of the CIA the DOJ, the FBI, the NSA, telling Americans what they ought to believe. They’ve infiltrated the means of communication domestically. They do it through leaks, they do it through clandestine operations and through lies. They propagandize the American people in a way that is incredibly dangerous no matter what your ideology is.

Tucker Carlson: I totally agree and I’m ashamed of the times that I made apologies for those agencies for this behavior. I really am. You are telling the truth. That’s really clear. Glenn Greenwald, congratulations on getting out of there. Good to see you.

Glenn Greenwald: Thank you, Tucker. I appreciate it.

William Brighenti is a Certified Public Accountant, Certified QuickBooks ProAdvisor, and Certified Business Valuation Analyst. Bill began his career in public accounting in 1979. Since then he has worked at various public accounting firms throughout Connecticut. Bill received a Master of Science in Professional Accounting degree from the University of Hartford, after attending the University of Connecticut and Central Connecticut State University for his Bachelor of Arts and Master of Arts degrees. He subsequently attended Purdue University for doctoral studies in Accounting and Quantitative Methods in Business. Bill has instructed graduate and undergraduate courses in Accounting, Auditing, and other subjects at the University of Hartford, Central Connecticut State University, Hartford State Technical College, and Purdue University. He also taught GMAT and CPA Exam Review Classes at the Stanley H. Kaplan Educational Center and at Person-Wolinsky, and is certified to teach trade-related subjects at Connecticut Vocational Technical Schools. His articles on tax and accounting have been published in several professional journals throughout the country as well as on several accounting websites. William was born and raised in New Britain, Connecticut, and served on the City's Board of Finance and Taxation as well as its City Plan Commission. In addition to the blog, Accounting and Taxes Simplified, Bill writes a blog, "The Barefoot Accountant", for the Accounting Web, a Sift Media publication.
View all posts by William Brighenti →
This entry was posted in Accountants CPA Hartford, Articles and tagged Bush, Cheney, CIA, deep state, Edward Snowden, FBI, Glenn Greenwald, Glenn Greenwald says that the Democratic Party NSA CIA Neocons Silicon Valley Wall Street have united to impose an authoritarian government of censorship and suppression of information, Guardian, Intercept, James Clapper, Joe Biden, John Brennan, mainstream media, Mike Hayden, NSA, October 29 2020, Russia disinformation, Silicon Valley, Substack, Tucker Carlson, U.S. government, Wall Street. Bookmark the permalink.