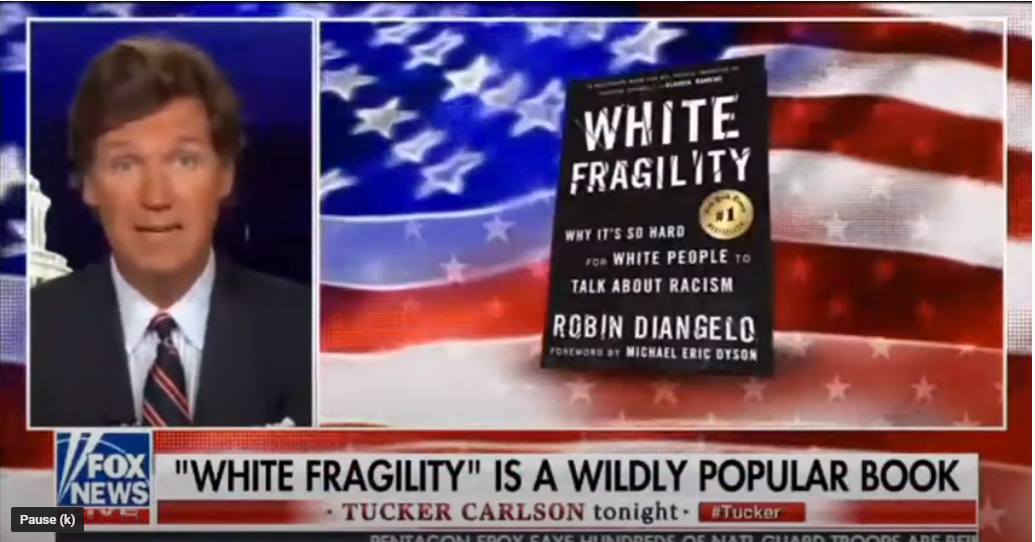 Below is a transcript of a segment from “Tucker Carlson Tonight” appearing June 24, 2020.

Tucker Carlson: Well the best-selling book in the country right now, in case you haven’t checked the rankings, is not a spy thriller. It’s not a young adult fantasy novel. It’s a short political book. It’s called “”White Fragility”.” Soon it may be required reading at your children’s school. It may be already. So what does it say?

We read it and we have a report after the break.

The best-selling book in America last week wasn’t anything by JK Rowling. It was a tract called “White Fragility” by Robin DiAngelo. It’s a hit and not a small hit. “White Fragility” has sold so many copies that the paperback edition is out of stock on Amazon. Schools and companies across the country are ordering it in bulk.

Deloitte is pushing it, so is NBC and Harvard Business School. The CEO of American Airlines was recently photographed reading the book. This fall “White Fragility” is likely to be required reading at your children’s school. You may soon be told to study it on a corporate retreat. So it’s worth knowing what it is, what it’s about exactly. 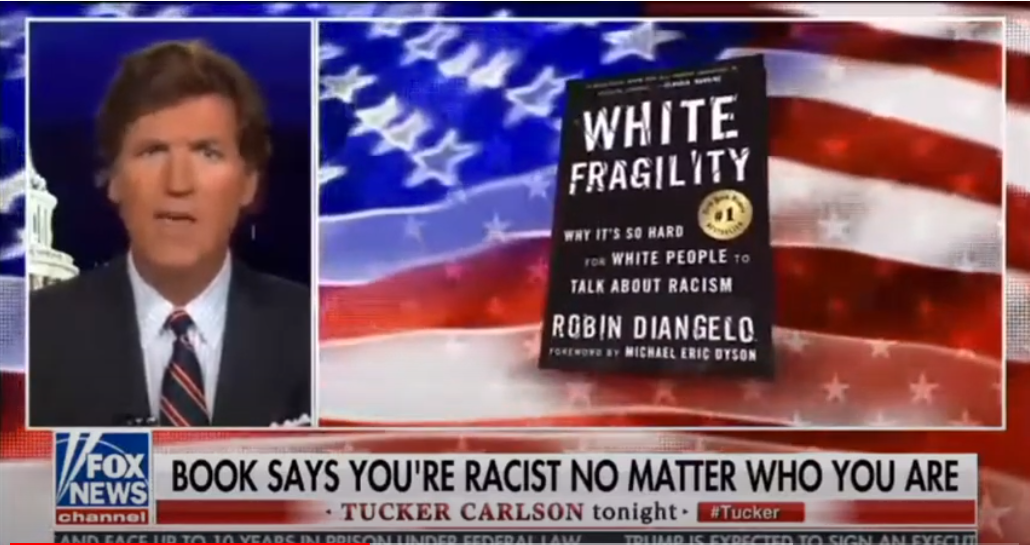 Book says you’re racist no matter who you are

Robin DiAngelo tells people this for a living. She’s a professional anti-racist educator. She shuttles between schools and boardrooms telling people if their DNA make them evil. She makes big money doing this. Last year, for example, the University of Kentucky, a publicly funded University, paid DiAngelo twelve thousand dollars for two hours of this message. The school could have used that money to give poor black kids an education but instead they handed the cash?—that’s more than a third of what the average American makes in a year?—to a not very bright white lady to tell them they’re racists. In other words, Robin DiAngelo has a very good gig. 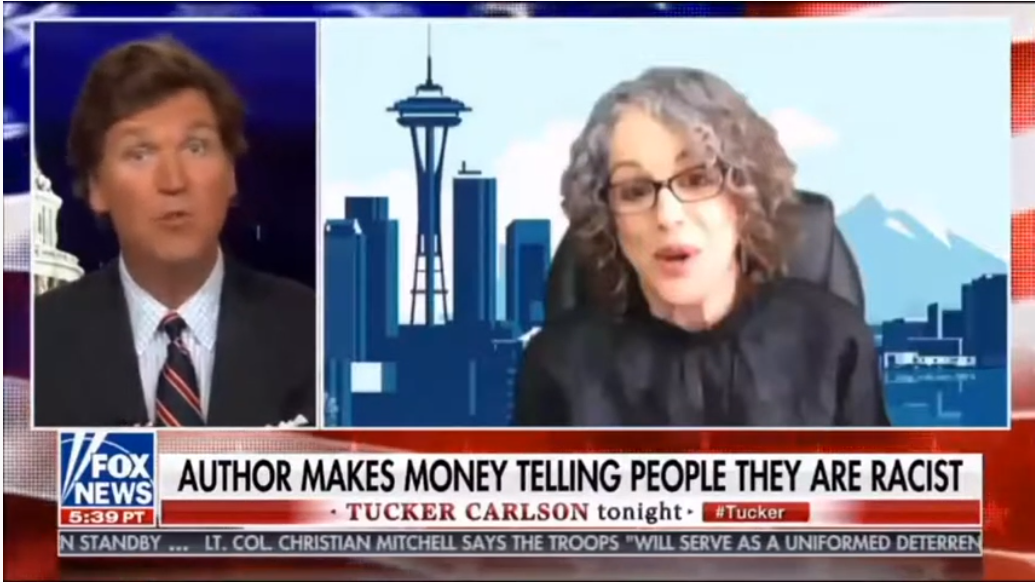 Of course, not everyone likes her message. Telling people they’re racists is fine if they actually are racists. But what if they’re not racists, and most people in this country are not. 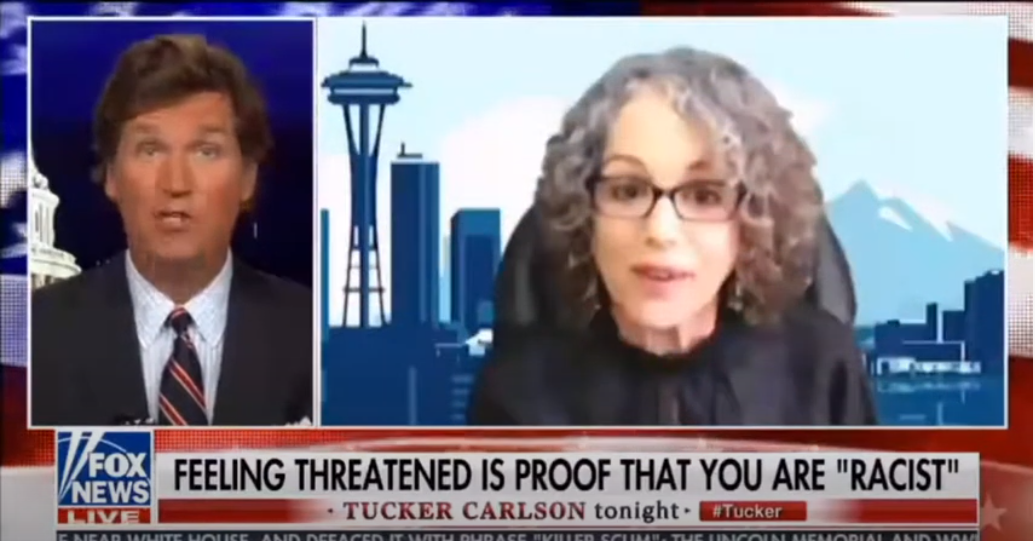 Feeling threatened is proof that you are racist

By the way, if you’re not threatened when someone publicly denounces you as racist, that is also proof that you’re a racist. Either way, my friend, you are a racist. Logic is clearly not Robin DiAngelo’s specialty. Neither is literate writing or clear thinking. She is a complete and total idiot. That’s one thing you learn by the end of her book.

And yet our leaders treat Robin DiAngelo with great respect. They think she’s a genius. That tells you everything about them and also the moment we’re living in. The dumbest people suddenly have the most power.

In the book, DiAngelo goes on to make a number of other ridiculously false claims. laughably false. Some of them are so obviously the opposite of what is actually true you’ve got to imagine she was grinning as she typed the manuscript. “Will they believe this?” Yes. 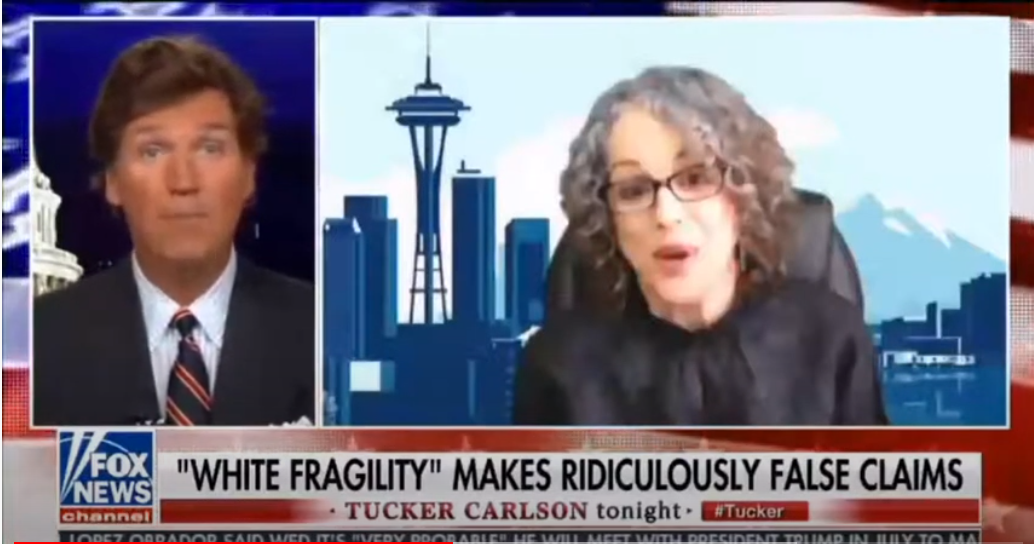 In America, DiAngelo writes, quote, “we are socially penalized for challenging racism.” Really? Where, and how? The country the rest of us live in the United States of America hates racism. Hating racism is effectively our national religion. Every organization we have is organized to stamp it out. Commit racism and the FBI shows up. 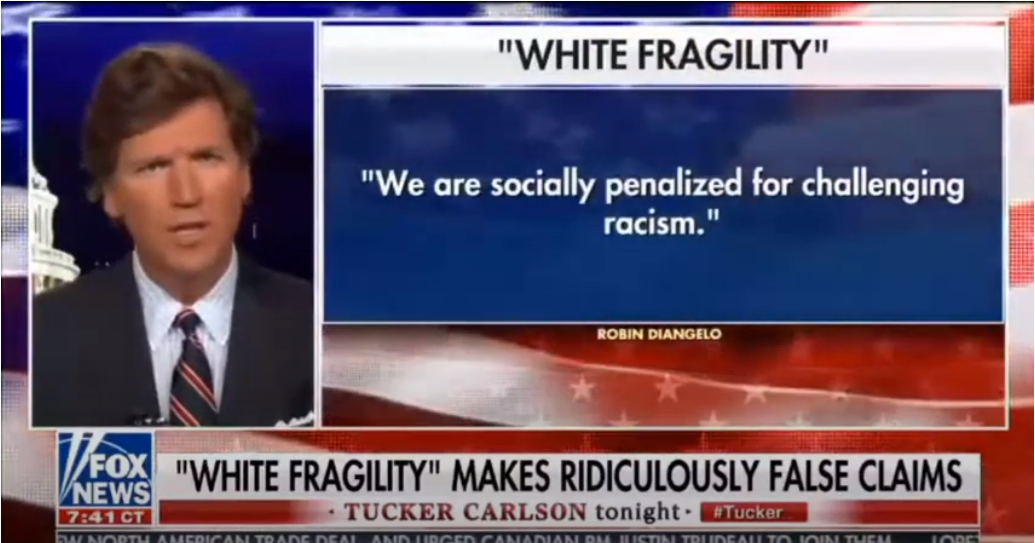 We are socially penalized for challenging racism

Come on, it’s just too absurd to be real. But Robin DiAngelo isn’t really trying to convince anyone. The real point of her book is to defeat and demoralize you. DiAngelo claims that everything you really want, everything that people of every color really want, in every society in the world, is a sign of white racism. 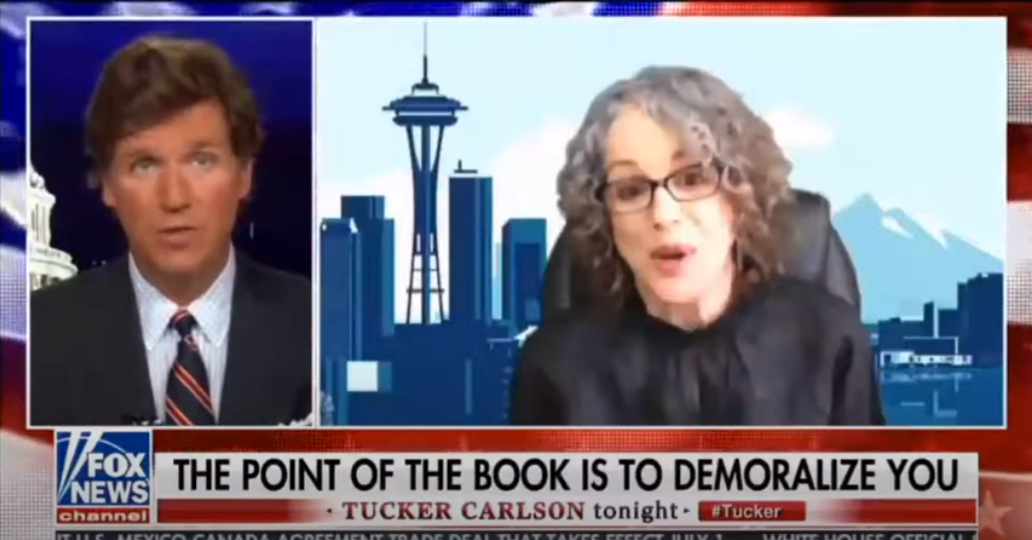 The point of the book is to demoralize you

You want to live in a safe neighborhood? You’re racist for that. You want to send your kids to a decent school? You’re a racist for that. All of your dreams are racism and the only way to atone for this racism is to give up those dreams, to abandon your aspirations, and make sure that your family lives a much worse life.

For white people, DiAngelo writes, quote, “discomfort is necessary and important.” Needless to say, DiAngelo does not address the millions of white people in this country who already live in perpetual discomfort because they are impoverished. She doesn’t mention the entire counties in rural America where virtually no adult man has a full-time job, where there are no dentists, because no one can afford to go to the dentist. 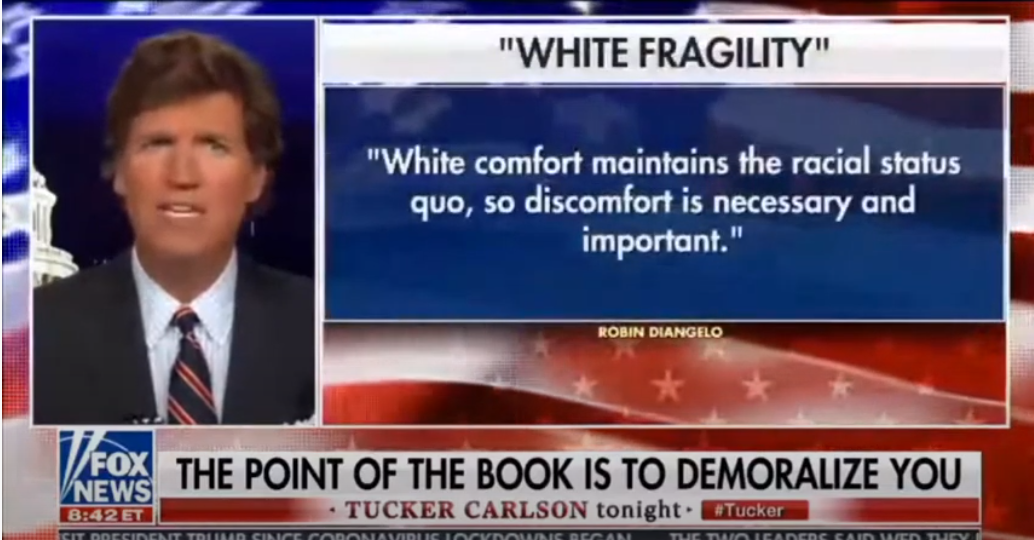 White comfort maintains the racial status quo, so discomfort is necessary and important

Robin DiAngelo has never met people like that. No doubt she would hate them if she did. Instead DiAngelo’s book is effectively addressed to entitled urban professionals as silly and frivolous and self-loathing as she is: her friends.

In DiAngelo’s world, economics play no role in anything. They don’t matter. Everyone she knows has a high-status job and a secure job. They’re not worried about unemployment. They don’t care about income inequality. They’re on the right side of it. These aren’t problems for them. 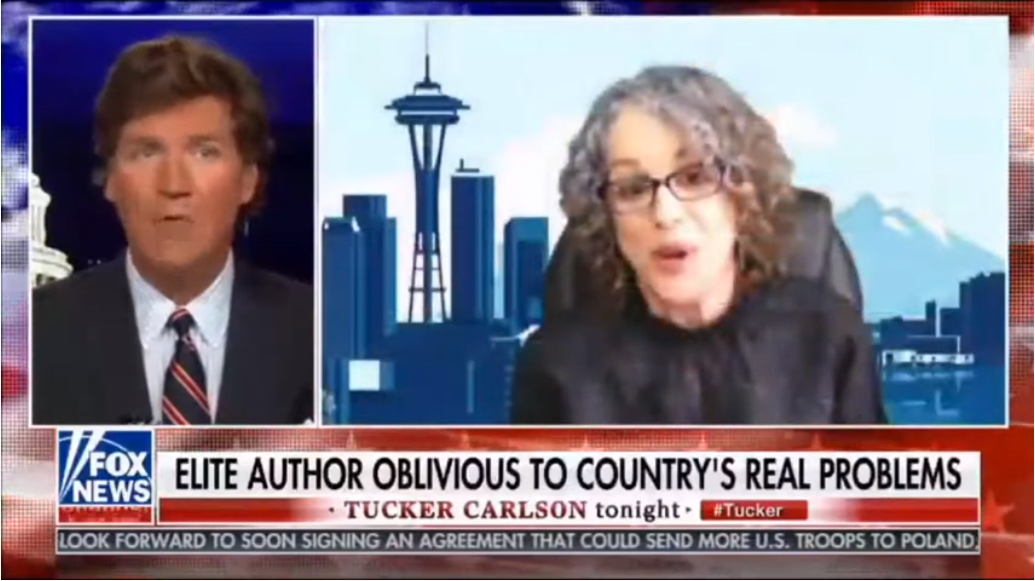 Remember, DiAngelo herself gets paid $6,000 an hour to talk. She’s not concerned about paying the rent. And in fact, DiAngelo explains at one point, worrying about economic injustice is just another symptom of, brace yourself here, racism, of “White Fragility.” Get it? Maybe you’re starting to understand why corporate America absolutely loves this book. Why? Because Robin DiAngelo absolves them of their crimes.

Apple and the health insurers and the credit card companies get off scot-free because the real problem Robin DiAngelo tells them is white racism, and what a relief that is for them to learn. 6,000 dollars an hour is a small indulgence to pay for that kind of forgiveness. Thank you, Reverend DiAngelo, we appreciate the house call.

In sum, “White Fragility” is an utterly ridiculous book. It’s ironies are so profound they make your head spin. A book about racism that is far more aggressively racist than anything Louis Farrakhan has ever written. A book that claims to side with black people but instead patronizes them and demeans them like their children. A book about systemic injustice that is in fact itself a sly defense of the very people perpetuating the worst injustices in our society. 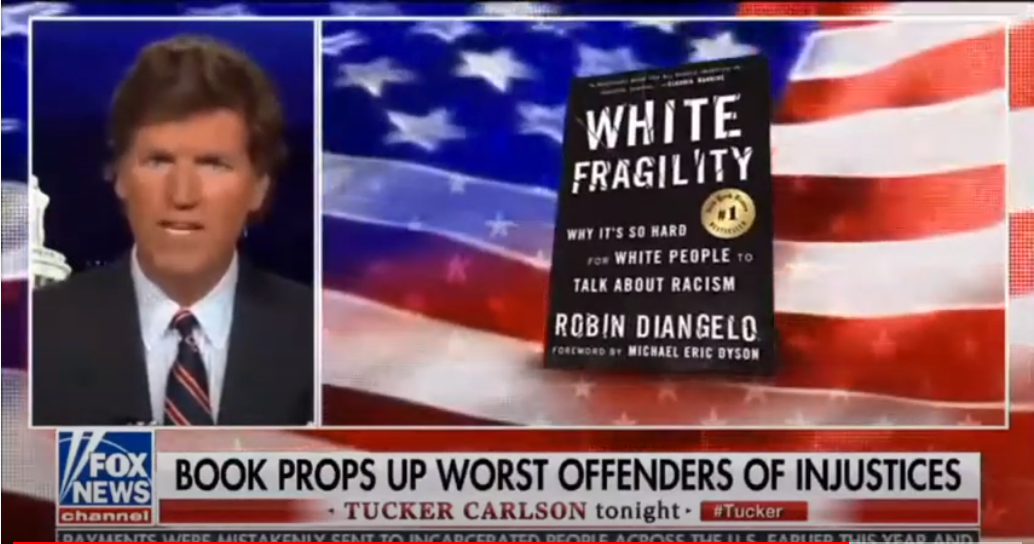 Everything about “White Fragility” is poisonous garbage, and it’s not an overstatement. And that will be obvious to you the second your kids bring it home from school. Or the moment the corporate HR director in your office lays a copy of it on your desk. And you should say so when that happens.

Don’t be passive. Speak up loudly. It is your right to disagree with Robin DiAngelo. What she says is wrong, it’s crazy, it’s destructive, and it ferments hatred.

We are Americans. We’re allowed to do that. The second we are forced to accept the premises of “White Fragility,” we won’t be Americans.

By the way, the main reason that a crackpot race tract like “White Fragility” and many books like it spread so rapidly in this country is because of American higher education. It is filled with rot and that rot spreads. Even now our public K through 12 schools are woke propaganda mills promoting racial division and hatred of the country that makes them possible. 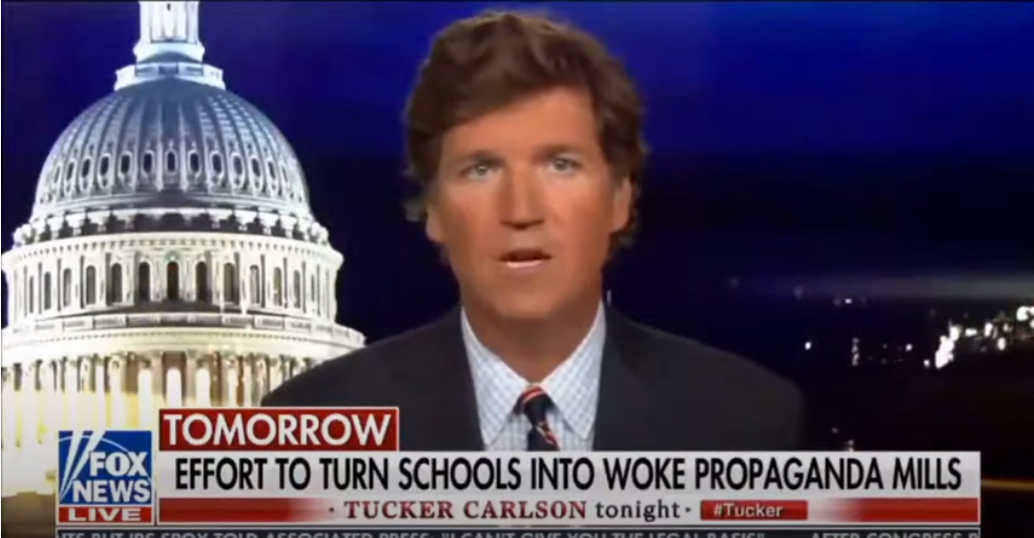 William Brighenti is a Certified Public Accountant, Certified QuickBooks ProAdvisor, and Certified Business Valuation Analyst. Bill began his career in public accounting in 1979. Since then he has worked at various public accounting firms throughout Connecticut. Bill received a Master of Science in Professional Accounting degree from the University of Hartford, after attending the University of Connecticut and Central Connecticut State University for his Bachelor of Arts and Master of Arts degrees. He subsequently attended Purdue University for doctoral studies in Accounting and Quantitative Methods in Business. Bill has instructed graduate and undergraduate courses in Accounting, Auditing, and other subjects at the University of Hartford, Central Connecticut State University, Hartford State Technical College, and Purdue University. He also taught GMAT and CPA Exam Review Classes at the Stanley H. Kaplan Educational Center and at Person-Wolinsky, and is certified to teach trade-related subjects at Connecticut Vocational Technical Schools. His articles on tax and accounting have been published in several professional journals throughout the country as well as on several accounting websites. William was born and raised in New Britain, Connecticut, and served on the City's Board of Finance and Taxation as well as its City Plan Commission. In addition to the blog, Accounting and Taxes Simplified, Bill writes a blog, "The Barefoot Accountant", for the Accounting Web, a Sift Media publication.
View all posts by William Brighenti →
This entry was posted in Accountants CPA Hartford, Articles and tagged "White Fragility" is a wildly popular book, Author makes money telling people they are racist, Book props up worst offenders of injustices, Book says you're racist no matter who you are, Effort to turn schools into woke propaganda mills, Elite author oblivious to country's real problems, Feeling threatened is proof that you are racist, Louis Farrakhan, Robin DiAngelo, so discomfort is necessary and important, The point of the book is to demoralize you, Tucker Carlson, Tucker Carlson calls Robin DiAngelo's book "White Fragility" "an utterly ridiculous book" "poisonous garbage" and "a crackpot race tract", Tucker Carlson calls Robin DiAngelo's book "White Fragility" "an utterly ridiculous book" and "poisonous garbage", Tucker Carlson Tonight June 24 2020, University of Kentucky, We are socially penalized for challenging racism, White comfort maintains the racial status quo, White Fragility, White Fragility makes ridiculously false claims. Bookmark the permalink.