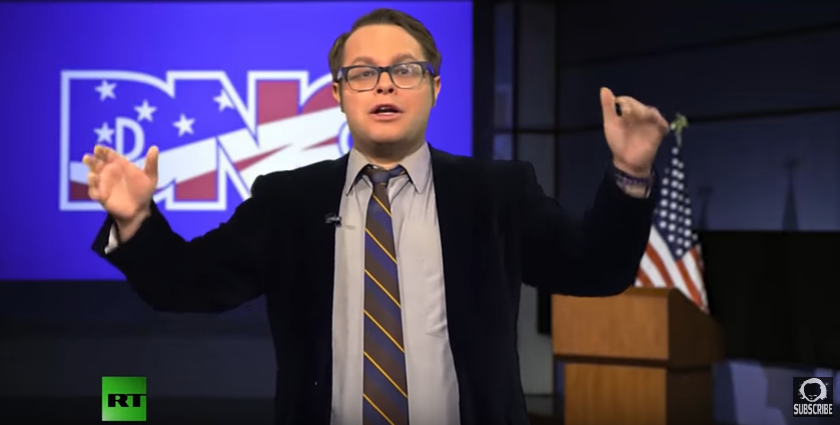 John F. O’Donnell: You know the Democratic Party is back, baby, back from the dead. They’re like Neo from the Matrix or Spock from Star Trek Three after Captain Kirk goes, “Khan”. They redeemed themselves by electing the progressive Berniecrat, Keith Ellison, as the head of the Democratic National Committee.

Donna Brazile: It is my honor now to present the gavel of the next chair of the Democratic National Committee to Mr. Tom Perez. Mr. Perez, congratulations.

John F. O’Donnell: Tom Perez? But he was the labor secretary under Obama. He was pro TPP and all in for Hillary Clinton during the campaign. He’s not a progressive. There must be some sort of mistake here.

Zaid Jilani of the Intercept: Keith Ellison started out very strong in this race. He received endorsements not only from Bernie Sanders and Elizabeth Warren but also from Harry Reid and Chuck Schumer, from a wide variety of labor unions. I mean, in a way, he really was the unity candidate in that he had brought together Sanders backers and Clinton backers.

Glenn Greenwald: …As Ellison’s momentum built, the Obama White House worked to recruit Perez to run against Ellison. They succeeded…Why did the White House work to recruit someone to sink Ellison? … What’s the rationale? None has ever been provided.

John F. O’Donnell: None has ever been provided. Touche quote reveal, I’ll see your lack of an explanation and raise you this:

Clio Change of the New Republic: There is one real difference between the two: Ellison has captured the support of the left wing … It appears that the underlying reason some Democrats prefer Perez over Ellison has nothing to do with ideology, but rather his loyalty to the Obama wing. As the head of the DNC, Perez would allow that wing to retain more control….

John F. O’Donnell: So you’re telling me the establishment Democrats that I’m trying real hard to get behind here sold out the progressives again? They’re the worst! They’re like Hans Gruber from Die Hard or Nurse Ratchet from One Flew Over the Cuckoo’s Nest.

Glenn Greenwald: There’s an uglier and tawdrier aspect to this. Just over two weeks after Ellison announced, the largest single funder of both the Democratic Party and the Clinton machine–the Israeli-American billionaire Haim Saban–launched an incredibly toxic attack on Ellison, designed to signal his veto. ‘He is clearly an anti-Semite and anti-Israel individual,” pronounced Saban about the African-American Muslim congressman.’
John F. O’Donnell: Seriously? They pulled the anti-Semite card? What are they trying to say, he’s like that character from Inglorious Bastards, what was his name? Oh, Hitler! Yes, Ellison is the first Muslim American ever elected to the US Congress, which should be embraced. And by all accounts he’s moderate on Israel-Palestine. This is a total hit job. I’m starting to hate the corporate Democrats again!

Clio Change: This reluctance to cede control comes despite the fact that Democrats have lost over 1,000 state legislature seats since 2009. There is no case for Perez that cannot be made for Ellison, while Ellison is able to energize progressives in ways that Perez cannot.

John F. O’Donnell: Why corporate Democrats? Stop denying power to the progressive left. You know it’s a losing move. Your party has imploded and all you care about are your corporate donors at the expense of even winning elections let alone the well-being of the American people.

Your concern for the working people of this country has all been a con.

William Brighenti is a Certified Public Accountant, Certified QuickBooks ProAdvisor, and Certified Business Valuation Analyst. Bill began his career in public accounting in 1979. Since then he has worked at various public accounting firms throughout Connecticut. Bill received a Master of Science in Professional Accounting degree from the University of Hartford, after attending the University of Connecticut and Central Connecticut State University for his Bachelor of Arts and Master of Arts degrees. He subsequently attended Purdue University for doctoral studies in Accounting and Quantitative Methods in Business. Bill has instructed graduate and undergraduate courses in Accounting, Auditing, and other subjects at the University of Hartford, Central Connecticut State University, Hartford State Technical College, and Purdue University. He also taught GMAT and CPA Exam Review Classes at the Stanley H. Kaplan Educational Center and at Person-Wolinsky, and is certified to teach trade-related subjects at Connecticut Vocational Technical Schools. His articles on tax and accounting have been published in several professional journals throughout the country as well as on several accounting websites. William was born and raised in New Britain, Connecticut, and served on the City's Board of Finance and Taxation as well as its City Plan Commission. In addition to the blog, Accounting and Taxes Simplified, Bill writes a blog, "The Barefoot Accountant", for the Accounting Web, a Sift Media publication.
View all posts by William Brighenti →
This entry was posted in Accountants CPA Hartford, Articles and tagged Berniecrat, Clio Change, Corporate donors, Democratic Party, DNC, Donna Brazile, Glenn Greenwald, John F. O'Connell, Keith Ellison, Labor Secretary, New Republic, Obama, Obama wing, progressive wing, Progressives, Redacted Tonight, Said Jilani, The hit job on Keith Ellison by the Corporate Democratic National Committee, The Intercept, Tom Perez, transcript, video. Bookmark the permalink.