Posted on January 12, 2017 by William Brighenti 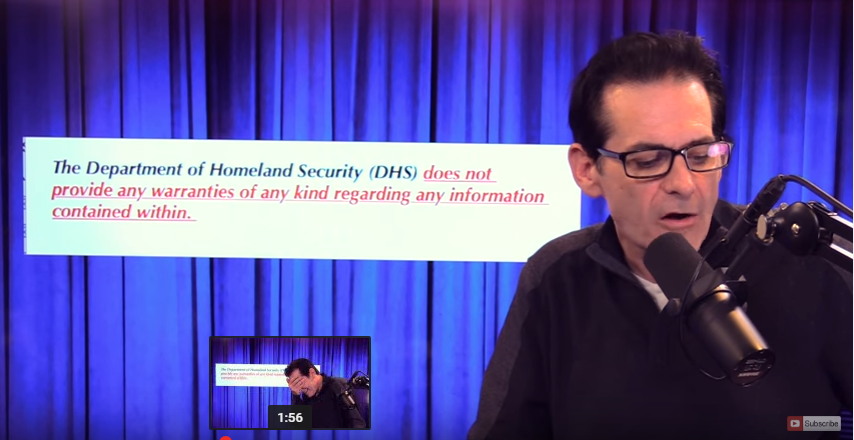 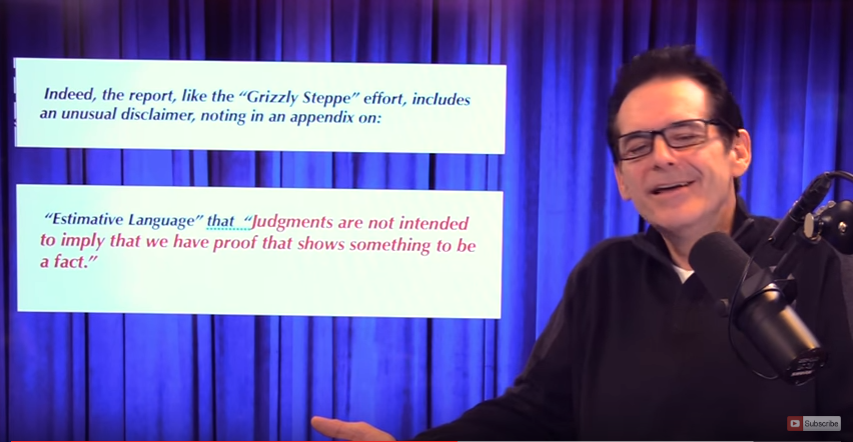 Jimmy Dore: The intelligence agencies have been releasing the reports to convince us that we should be upset at Russia because they hacked our election. First of all, who gives a shit if they did? The United States tapped Angela Merkel’s phone, and she’s our ally. We do this shit all the time. Okay? And don’t think we’re not hacking Russia all the time also so it doesn’t bother me at all.

This is what James Clapper revealed. This is what intelligence agencies do, so ok? And what people are really upset about is that, oh my God, Russia got access to John Podesta’s emails and then they ran around spreading the truth.

So they put out this big report . This is the first one they put up. It’s the joint analysis report from the NCCIC and the FBI.

Stef Zamorano: I don’t know. I think I want some warranties when it comes from Homeland Security.

Just quit reading right there. This is the lip. So I went to a CIA guy who writes for the American Conservative, Philip Giraldi, and he was an ex-CIA guy so do I believe him? You say I’m supposed to believe the CIA now right? Well he’s a CIA guy. I’m supposed to believe him, right? Well here’s what he says: “No smoking gun on Russia hack. Language used the intelligence community’s latest report.” Suggests. Yes it does suggest.

“So the latest attempt to nail perfidious Moscow is, to my mind, yet another miss-mash of soft facts combined with plenty of opinion and maybe even a bit of good old Cold War-style politics.” That’s quite a stew.

“A lot of sometimes wild speculation and judgments based on fragmentary information taken together are not a good basis for determining foreign policy.” It’s what got us into the Iraq war, killing hundreds of thousands, if not millions, setting the Middle East on fire. It’s what got us into Libya. Got us into first Gulf War. Got us in Vietnam. Bullshit.

“A lot of sometimes wild speculation and judgments based on fragmentary information taken together are not a good basis for determining foreign policy, particularly if one is dealing with a powerful foreign state that is heavily armed with nuclear weapons and ballistic-missile delivery systems.”

So those reports that everyone’s screaming about how great they were, they are bullshit. They come with disclaimers that the people putting them out are saying, hey, we are not vouching for this. We’re not going to vouch for our own report, okay? Just so you know.

But I’m going to give it to all the knuckleheads at CNN and MSNBC and they’re going to go with it. They’re not. And the New York Times, and John Harwood, and Kurt Eichenfuck: all the morons.

William Brighenti is a Certified Public Accountant, Certified QuickBooks ProAdvisor, and Certified Business Valuation Analyst. Bill began his career in public accounting in 1979. Since then he has worked at various public accounting firms throughout Connecticut. Bill received a Master of Science in Professional Accounting degree from the University of Hartford, after attending the University of Connecticut and Central Connecticut State University for his Bachelor of Arts and Master of Arts degrees. He subsequently attended Purdue University for doctoral studies in Accounting and Quantitative Methods in Business. Bill has instructed graduate and undergraduate courses in Accounting, Auditing, and other subjects at the University of Hartford, Central Connecticut State University, Hartford State Technical College, and Purdue University. He also taught GMAT and CPA Exam Review Classes at the Stanley H. Kaplan Educational Center and at Person-Wolinsky, and is certified to teach trade-related subjects at Connecticut Vocational Technical Schools. His articles on tax and accounting have been published in several professional journals throughout the country as well as on several accounting websites. William was born and raised in New Britain, Connecticut, and served on the City's Board of Finance and Taxation as well as its City Plan Commission. In addition to the blog, Accounting and Taxes Simplified, Bill writes a blog, "The Barefoot Accountant", for the Accounting Web, a Sift Media publication.
View all posts by William Brighenti →
This entry was posted in Accountants CPA Hartford, Articles and tagged American Conservative, Assessing Russian Activities and Intentions in Recent US Elections, CIA, CNN, disclaimers, FBI, intelligence reports Russia hacking, James Clapper, January 11 2017, Jimmy Dore, John Harwood, MSNBC, NCCIC, New York Times, Our intelligence agencies have issued disclaimers stating that their reports of Russian hacking of the election lack any proof of facts, Philip Giraldi, Russia Hacking Absolutely NOT Confirmed By Intelligence Agencies, Stef Azmorano, The Jimmy Dore Show, transcript, video. Bookmark the permalink.