Posted on January 9, 2017 by William Brighenti 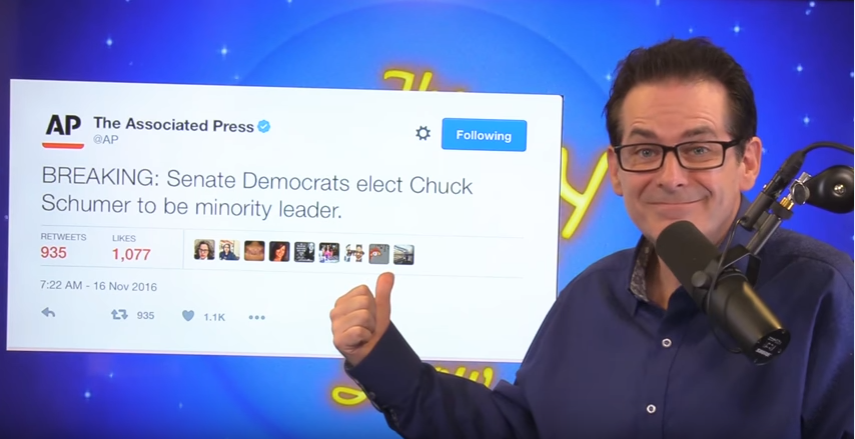 Hey guess what? I’ve said it before, I’m saying it again. We need to have activism, which is sprouting up spontaneously in response to the Trump Presidency. So the people on the Left, the corporatist Democrats, are coming together with the real progressives to oppose Donald Trump. Isn’t that nice?

What the Democratic Party needs to do is cleanse itself of those corporatists who became Republicans and are losers: guys like Chuck Schumer. Remember Chuck Schumer’s whole strategy for the general election?—Chuck Schumer is the leading Democrat in the Senate?—and he said don’t worry about blue-collar Democrats in Pennsylvania. For every blue-collar Democrat we lose in Pennsylvania, we’re going to gain two to three Republicans in the suburb. That’s what he said.

So they went after Republicans and they lost to Donnie Tiny Hands. They don’t even know why they’re Democrats anymore. How are you a Democrat if you don’t go after blue-collar voters but instead you go after Republican voters. You’re a fucking Republican. Chuck Schumer is a Republican.

Show me how he’s a Democrat. Somebody please in the comments show me how Chuck Schumer is a Democrat besides being pro-gay rights and pro-abortion because most Republicans are that now. Show me.

Guess what happened. Some people got together and they went and occupied Chuck Schumer’s office. Isn’t that fantastic? Want to see the video of it? Here it is. Look at this.

James Hayes, Organizer for AllofUs: “In place like Cleveland, and across northeast Ohio, there are many families who, for a variety of reasons, feel invisible to local, state and national party leadership. This is because rather than empower and listen to the concerns of working-class Americans, and the families that their party claims represent, this party [the Democratic Party] has become the party of Wall Street. We need leadership takes its cue from the American people?—not the corporate and financial establishment.”

17 protesters were arrested during the sit-in.

17 demonstrators were arrested on Monday while staging a sit-in against Senator Chuck Schumer, Democrat from New York, at the incoming Senate minority leader’s office in Washington, DC, according to a new report. The arrested protesters were from a group of roughly 40 people urging Schumer to step aside and hand the party’s leadership to either Senator Bernie Sanders or Elizabeth Warren.

That’s what they wanted. They wanted to hand the leadership of the Senate over to people who aren’t bought by corporations. The people didn’t just lose the goddamn election to Donald Trump. And your only idea is to get more money from the people you should be regulating. That’s Chuck Schumer.

Shahid said All of Us 2016 formed about a month before President-elect Donald Trump’s stunning White House win.

These are activists starting their own activist group and they’re going out and they’re occupying the Senate Minority Leader’s office. Fantastic. Fantastic. The group now plans on targeting Wall Street Democrats (way to go) he said, which it blames for the Republican’s win over Democratic Presidential nominee Hillary Clinton. “A lot of us are willing to go to jail,” Shahid said, adding the group would target all Democratic senators “who don’t do anything they can to filibuster Trump’s legislation that promotes his hatred or his greed.”

“We are here because so many of us are terrified and scared and pissed off, said Yong Jung Cho, a participant from Queens, New York. “Donald Trump is a threat to the American people,” she added, warning Monday’s protest was a “first warning” to other Democrats. We’re coming for you

So if the Democratic Party and Bernie Sanders?—even Bernie Sanders and Elizabeth Warren?—think you can still stay in bed with Wall Street, or some of you can still be in bed or your leadership can be in bed with Wall Street, these people are here to let you know, fuck you. Get ready to lose to Trump again. Fuck you, we’re not doing this shit anymore.

Half the country is poor, you assholes. People are crushed by debt. You got a Democratic President outsourcing jobs, still deporting two million Hispanics, the shit Trump’s dreaming of doing, right now the fucking Democrats are doing it, and these people are saying, “enough.”

You’re going to lose again, Bernie. You lost with Hillary, and he did it on purpose, and you knew she was going to lose, and you backed her anyway. And what Bernie Sanders should have done, god damn it, you know it and I know it, is he should have taken Jill Stein’s offer and ran with the Green Party and then Hillary Clinton would have shit in her pants instead of what she did do was be arrogant because she had every motherfucking lefty saying that they were going to support her, like morons, instead of challenging her to make her a better fucking candidate to come together with the progressives and form a real coalition government.

Instead she picked Tim Kaine and those fucking idiot lefties, “I’ll support you even more now. I’m pretending this isn’t happening. I’m supporting you more. Ha-ha. This will be great, right? If he does shitty things and we say we support her, then she’ll win, right?

No, she wins if she’s a better candidate, you fucking knuckleheads. Get ready for eight more years of Trump. The Democratic Party is dead. They keep doing this. I’m not going to work to try to turn the Senate Democrats, of which Chuck Schumer is the leader, I’m not going to lift a goddamn finger to help them.

Do you recall any time Chuck Schumer led on anything? When did Chuck Schumer ever lead for anybody except himself and his donors? Ever? He’s the one who told people don’t worry about the blue-collar voters, we’re going to pick up Republicans in the suburb. That was his strategy: to go after Republicans. Chuck Schumer. And they just made him their leader in the Senate with Bernie’s support. Bernie, you just supported Hillary Clinton and she lost to Donald Trump. Why don’t you wake up?

Grow a spine. Bernie Sanders, when are you going to risk losing your friendship with the Democrats to help your country? When are you going to risk doing that? You had a stupid secret agreement not to attack Hillary Clinton, and you stayed by it, and then when the country needed you to do something with your movement, you told them to go work for the Machine. And now you’re telling them to back Chuck Schumer.

So this is the death rattle of the Democratic Party. If you don’t see it Bernie, if you don’t see it, Elizabeth Warren, if you don’t see it Keith Ellison, this is it. I’m not going to help try to turn the Senate Blue if it’s Chuck Schumer and the people on the Left who tried to help Hillary Clinton, if they still try to help you do that, they’re losers again. The people know. They went and occupied his office.

I think they need to do better and really hear the wake-up call because I think a lot of people, you know, yesterday we were talking about how so many folks in the corporate media are still pointing fingers everywhere except for themselves but I think a lot of people that you know held their nose and supported Hillary Clinton that were hesitant about it now they’re seeing ok it’s not working anymore. The system is over. It’s done. Now we need all new blood. We need all new ideas. This isn’t going to cut it. This is not going to cut it.

You know, I’d be satisfied with … I’m not even looking for new ideas. I’m just looking for the idea that …. The New Deal is not a new idea. It’s an old idea. And it worked really well.
What’s Barack Obama talking about? Hey, we need to go back to the New Deal. No, he
never even mentioned it. They never mention FDR.

I don’t think there’s any time to do a New Deal because they have to do more war. They got to do more war and get more money from George Soros and Wall Street. That’s why they got Chuck Schumer: he’s a great fundraiser.

By the way, that’s how you progress in politics. You raise funds. So whoever raises the most money gets attention from the party leadership because you’re bringing the money and they equate money with victory even though Hillary Clinton just raised a billion dollars and got her ass handed to her. So that’s what that’s all about.

Chuck Schumer raises money from Wall Street and then he gives money to his other colleagues in the Senate and then they vote for him because it’s all about fucking money. It’s got nothing to do with serving the people.

What did Chuck Schumer ever do to serve the people? Look at this party. This party are dinosaurs.

Did you see that big speech Elizabeth Warren gave about DAPL? Me neither. I didn’t see that.

Is she also going to take another tough stance? She’s going to dress down another Wells Fargo CEO, something that costs her nothing to do.

Way to go Democrats. Get ready for eight years of Trump. This is the Democrats big idea.

William Brighenti is a Certified Public Accountant, Certified QuickBooks ProAdvisor, and Certified Business Valuation Analyst. Bill began his career in public accounting in 1979. Since then he has worked at various public accounting firms throughout Connecticut. Bill received a Master of Science in Professional Accounting degree from the University of Hartford, after attending the University of Connecticut and Central Connecticut State University for his Bachelor of Arts and Master of Arts degrees. He subsequently attended Purdue University for doctoral studies in Accounting and Quantitative Methods in Business. Bill has instructed graduate and undergraduate courses in Accounting, Auditing, and other subjects at the University of Hartford, Central Connecticut State University, Hartford State Technical College, and Purdue University. He also taught GMAT and CPA Exam Review Classes at the Stanley H. Kaplan Educational Center and at Person-Wolinsky, and is certified to teach trade-related subjects at Connecticut Vocational Technical Schools. His articles on tax and accounting have been published in several professional journals throughout the country as well as on several accounting websites. William was born and raised in New Britain, Connecticut, and served on the City's Board of Finance and Taxation as well as its City Plan Commission. In addition to the blog, Accounting and Taxes Simplified, Bill writes a blog, "The Barefoot Accountant", for the Accounting Web, a Sift Media publication.
View all posts by William Brighenti →
This entry was posted in Accountants CPA Hartford, Articles and tagged All of Us, Bernie Sanders, Bernie Sanders is Outreach Director, Bernie Sanders just sold out Progressives once again but this time to Chuck Schumer, Chuck Schumer, Democratic Party, Donald Trump, Elizabeth Warren, George Soros, James Hayes, Jill Stein, Jimmy Dore, protesters, Senate minority leader, transcript, video, Wall Street. Bookmark the permalink.