Jill Stein is right about our foreign policy and Hillary Clinton is all wrong! 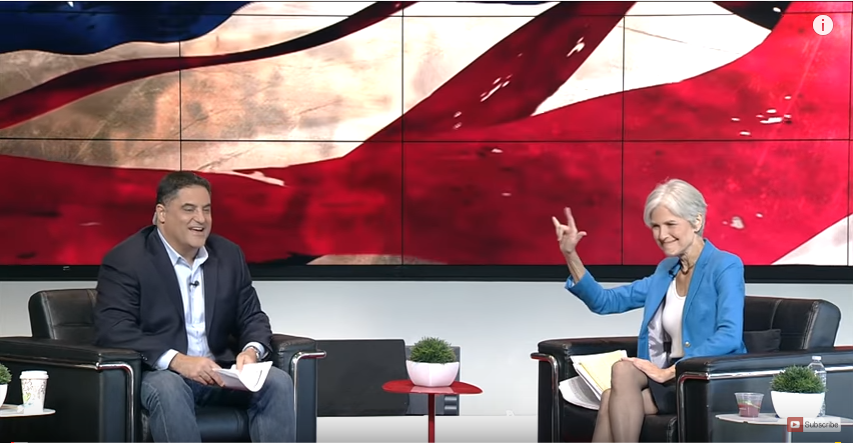 In an interview with Cenk Uygur on The Young Turks TYT show on October, 21, 2016, Jill Stein was asked what would she do to ensure the protection of Estonia from an invasion from Russia. I found her response to be very rational, unlike what I have heard from Hillary Clinton regarding her posture toward Russia.

She questioned the need for our financing of NATO, the need for 800 US military bases around the world, the threat that such imposes to neighboring countries, and the cost to American households.

Jill Stein asked, how would we feel if Russia had installed nuclear missiles along our Canadian and Mexican borders. She observes that in NATO that is precisely what the United States has done in Europe along Russia’s borders. We have surrounded Russia with thousands of nuclear missiles on hair-trigger alert.

Moreover, Jill Stein quoted a Harvard research study concluding that the wars in Iraq and Afghanistan have cost us thus far $6 trillion. That means these wars have cost each United States’s household $50,000. Are you pleased that our government has spent $50,000 of your money on these two wars alone thus far?

Hillary Clinton will only continue these endless military interventionist wars and funding, costing each American household thousands of more dollars and risking the lives of everyone on our planet. One million casualties have already resulted from her three interventionist wars in the Middle East.

How many more millions of people need to die, and how many trillions of our tax dollars need to be spent, before Americans stop electing candidates owned by the military-industrial complex and Wall Street?

William Brighenti is a Certified Public Accountant, Certified QuickBooks ProAdvisor, and Certified Business Valuation Analyst. Bill began his career in public accounting in 1979. Since then he has worked at various public accounting firms throughout Connecticut. Bill received a Master of Science in Professional Accounting degree from the University of Hartford, after attending the University of Connecticut and Central Connecticut State University for his Bachelor of Arts and Master of Arts degrees. He subsequently attended Purdue University for doctoral studies in Accounting and Quantitative Methods in Business. Bill has instructed graduate and undergraduate courses in Accounting, Auditing, and other subjects at the University of Hartford, Central Connecticut State University, Hartford State Technical College, and Purdue University. He also taught GMAT and CPA Exam Review Classes at the Stanley H. Kaplan Educational Center and at Person-Wolinsky, and is certified to teach trade-related subjects at Connecticut Vocational Technical Schools. His articles on tax and accounting have been published in several professional journals throughout the country as well as on several accounting websites. William was born and raised in New Britain, Connecticut, and served on the City's Board of Finance and Taxation as well as its City Plan Commission. In addition to the blog, Accounting and Taxes Simplified, Bill writes a blog, "The Barefoot Accountant", for the Accounting Web, a Sift Media publication.
View all posts by William Brighenti →
This entry was posted in Accountants CPA Hartford. Bookmark the permalink.