The Brainwashing Of Hillary Voters Is Complete. Transcript of October 20 2016 The Jimmy Dore Show.

Posted on October 23, 2016 by William Brighenti 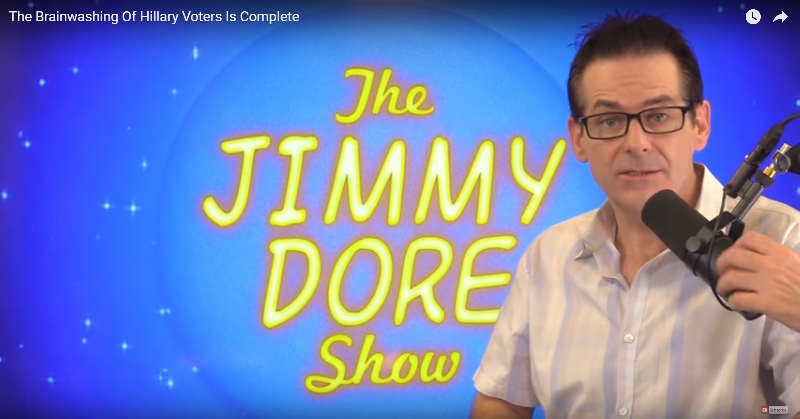 So you know I like to keep them honest here as they say at CNN. We’re not playing the partisan game of rooting for one horrible candidate over another horrible candidate. In fact you know our theories about it?—that voting neoliberalism this election is worse than ever because right now the Republican Party is falling apart, crack fracturing, and we’ve talked all about this.

This is the year to start a progressive movement. But when I see stuff like this, ThinkProgress tweets out a Trump presidency is a clean-energy nightmare, and then they have an article about it, which I didn’t bother to read because Trump’s not going to be President. And ha-ha. And so would Hillary Clinton. I get it. Yes, I’m sure a Trump presidency would be a nightmare for climate change. So is Hillary Clinton’s.

And the reason why I’m bringing this up is to just show you how brainwashed regular people are.  Just how they just regurgitate talking points handed to them by the corporate duopoly that is now in control of our elections.  They just repeat it, and without thinking, they don’t go away.

Hey, this is the conventional group.  This is group think For instance,somebody right underneath that said, “dude, we know Hillary is bad. We’re voting for her because airplanes would fall from the sky with Trump.” So you’re just going to invent crazy things about trust.

What I said to that was, meanwhile we’re bombing Yemen. Our Democratic president is pushing the TPP.  And he’s jailing journalists.  But this seems rational.

So if you’re going to concoct a conspiracy to distract people from the most horrible shit in the world, you would create Donald Trump.  And maybe the Democrats got lucky that he just came along but they certainly helped.  What the WikiLeaks are also revealing that the Clintons knew Trump would help them and they pushed it.  And that’s exactly what’s happening.

All this horrible shit that’s happening and everybody’s talking about Trump.  Oh, did you see Michelle’s speech about Trump? Hey, did you know we’re poisoning kids and Flint with lead? You know, they’re already poisoned already? You know, your husband is now drone bombing weddings?

So I’m getting off the track a little bit.  This is to show you how mental regular people are. And we all know that the comedians and the pundits, who used to be considered lefty, who are now propping up a corporatist warmonger, who’s turned her back on the climate and her own country and workers, those people who are doing that, I don’t know how to look them in the eye anymore, eh.

But they’re going to keep doing this, this excusing horribleness.  Have they been manipulated or is there something wrong with their brains?  I don’t know.

But anybody who can defend Hillary Clinton, they’re either getting paid or they’re brainwashed.  And I’m going to say that guy’s brainwashed: oh, because with Trump airplanes would fall from the sky.  To me that actually sounds like maybe that guy is joking.  Like no we have to vote for Trump because planes would fall from the sky right? Isn’t that what everybody says, right?  That sounds to me maybe that’s what that guy was saying, Ramon.  Good for you, Ramon.  I’m going to turn it around: he was probably right.

You know, more people consider themselves independent than they consider themselves Republican or Democrat, so if everybody voted their conscience this election, we can get rid of these two parties.  But people won’t do it.  Why?  Because you’re brainwashed, that’s why.  Because people don’t have a problem regurgitating corporate talking points handed to them by warmongers.  They don’t mind doing that.  That’s exactly what you’re doing.

We are going to keep going.  And then this guy says?— by the way, this is the same thread?—this guy says “I think the irrational thing might be to think voting Stein has any effect on this machine.”

Ok, so here we go.  Here’s what I said back. “I can tell you for sure what doesn’t have any effect on the machine; pledging your vote and support to the machine.”  So this idea that people have?—you hear it from everywhere, you hear it from grownups who say, “no, I’m voting for Hillary and then, you know, and then we’re going to move her left.”

What is wrong with people?  That didn’t take me a second to think of that.  So this is just people repeating corporate talking points handed down to you by the electoral duopoly. And you just say them; you just accept it.

It’s a sad state what’s happening in America to the mind of the American left voter.  They completely swallowed the corporate talking points handed to them by people whose interest it is in keeping a two-party duopoly.

William Brighenti is a Certified Public Accountant, Certified QuickBooks ProAdvisor, and Certified Business Valuation Analyst. Bill began his career in public accounting in 1979. Since then he has worked at various public accounting firms throughout Connecticut. Bill received a Master of Science in Professional Accounting degree from the University of Hartford, after attending the University of Connecticut and Central Connecticut State University for his Bachelor of Arts and Master of Arts degrees. He subsequently attended Purdue University for doctoral studies in Accounting and Quantitative Methods in Business. Bill has instructed graduate and undergraduate courses in Accounting, Auditing, and other subjects at the University of Hartford, Central Connecticut State University, Hartford State Technical College, and Purdue University. He also taught GMAT and CPA Exam Review Classes at the Stanley H. Kaplan Educational Center and at Person-Wolinsky, and is certified to teach trade-related subjects at Connecticut Vocational Technical Schools. His articles on tax and accounting have been published in several professional journals throughout the country as well as on several accounting websites. William was born and raised in New Britain, Connecticut, and served on the City's Board of Finance and Taxation as well as its City Plan Commission. In addition to the blog, Accounting and Taxes Simplified, Bill writes a blog, "The Barefoot Accountant", for the Accounting Web, a Sift Media publication.
View all posts by William Brighenti →
This entry was posted in Accountants CPA Hartford, Articles and tagged brainwashing, Chris Hedges, corporate talking-points, Democrats, discrediting journalists reporting on Wikileaks, Donald Trump, duopoly, George Orwell, Green Party, Hillary Clinton, Independents, Jill Stein, Jimmy Dore, John Oliver, October 20 2016, Republicans, The Brainwashing Of Hillary Voters Is Complete, The Brainwashing Of Hillary Voters Is Complete. Transcript of October 20 2016 The Jimmy Dore Show., The Jimmy Dore Show, ThinkProgress, third party, transcript, WikiLeaks. Bookmark the permalink.