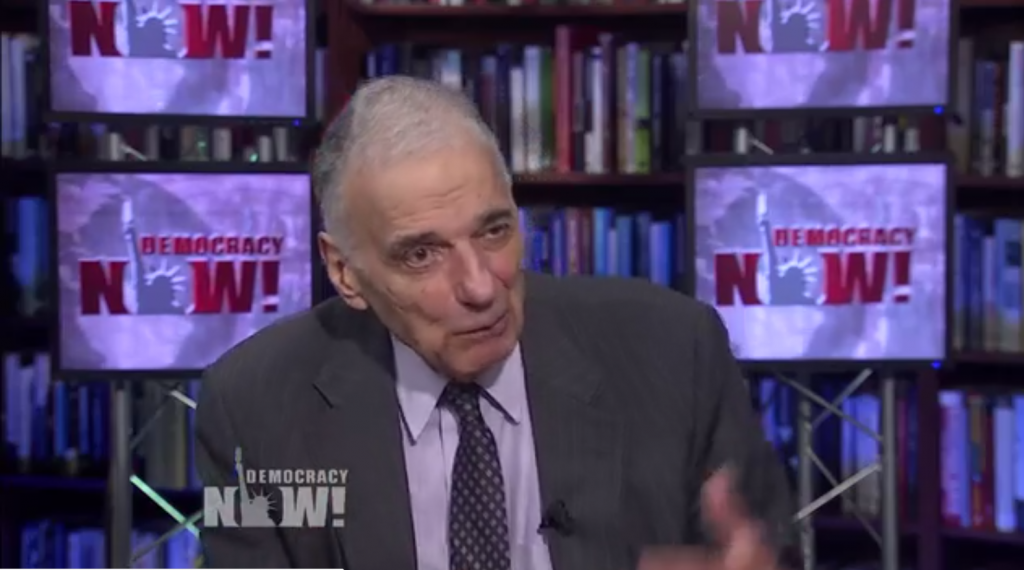 People from outside the major parties who are pursuing elected office are exercising their First Amendment rights, and calling them spoilers is an act of “political bigotry” that should never be tolerated by the American people, civil rights champion and four-time presidential candidate Ralph Nader told “Democracy Now!”

Nader’s comments come one week before the 2016 nominees’ first presidential debates, which the Commission on Presidential Debates—a private corporation owned and controlled by the Republican and Democratic parties—announced Friday will exclude both Jill Stein of the Green Party and Gary Johnson of the Libertarian Party.

“If we had proportional representation, instant runoff voting, all this spoiler stuff wouldn’t be around,” Nader continued. “Everyone has an equal right to run for office. Everyone is going to get votes from one another. So they’re either spoilers of one another or none of them are spoilers.”

“You should never tell anybody to shut up,” Nader added. “And when you run for office, it’s free speech, petition and assembly. It’s the consummate use of the First Amendment. But here—it’s a scapegoating. The Democrats could never get over how they couldn’t beat this bumbling governor from Texas, who couldn’t put a paragraph together and has a horrible record.”

In the clips below, Nader and “Democracy Now!” host Amy Goodman discuss the system that decides who gets to enter presidential debates—how it formed and how it operates today—and how the “huge, wonderful effort” that Sen. Bernie Sanders launched during the 2016 presidential primary “is now aborted,” as Nader said.

“Sanders hasn’t returned a call from me in 18 years,” Nader stated. “He is a lone ranger. He doesn’t like to be pushed into more progressive action than he is willing to adhere to. As a result, millions of his voters now are in disarray. They don’t know where to go.”

At length, Nader spelled out what he thinks Sanders should do:

“It is the time for Senator Sanders to mobilize, as he can, all his supporters around the country with mass rallies to put the heat on both candidates. Is anything wrong with that? He should have a mass rally in the Mall and then spread it all over the country, so you have civic pressure, citizen pressure, coming in on all the candidates to further the just pathways of our society. Why doesn’t he do that? …

William Brighenti is a Certified Public Accountant, Certified QuickBooks ProAdvisor, and Certified Business Valuation Analyst. Bill began his career in public accounting in 1979. Since then he has worked at various public accounting firms throughout Connecticut. Bill received a Master of Science in Professional Accounting degree from the University of Hartford, after attending the University of Connecticut and Central Connecticut State University for his Bachelor of Arts and Master of Arts degrees. He subsequently attended Purdue University for doctoral studies in Accounting and Quantitative Methods in Business. Bill has instructed graduate and undergraduate courses in Accounting, Auditing, and other subjects at the University of Hartford, Central Connecticut State University, Hartford State Technical College, and Purdue University. He also taught GMAT and CPA Exam Review Classes at the Stanley H. Kaplan Educational Center and at Person-Wolinsky, and is certified to teach trade-related subjects at Connecticut Vocational Technical Schools. His articles on tax and accounting have been published in several professional journals throughout the country as well as on several accounting websites. William was born and raised in New Britain, Connecticut, and served on the City's Board of Finance and Taxation as well as its City Plan Commission. In addition to the blog, Accounting and Taxes Simplified, Bill writes a blog, "The Barefoot Accountant", for the Accounting Web, a Sift Media publication.
View all posts by William Brighenti →
This entry was posted in Accountants CPA Hartford, Articles and tagged Amy Goodman, announcement to run for President Bernie Sanders, Bernie Sanders, Democracy Now, Democratic Party, Donald Trump, duopoly, Gary Johnson, Green Party, Hillary Clinton, Jill Stein, Libertarian Party, Ralph Nader, Ralph Nader Says Calling a Third-Party Candidate a Spoiler Is the Same as Saying Shut Up, Republican party, September 19 2016, spoiler. Bookmark the permalink.