Chris Hedges says to stop terrorism we merely need to end the U.S. occupation of the Middle East 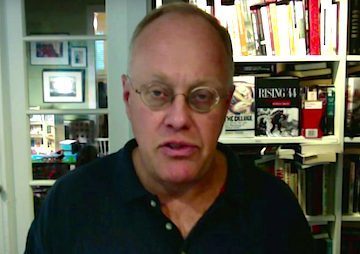 JAISAL NOOR, TRNN: An Afghanistan born American sought in connection with a series of bombings that wounded 29 people in the New York City area over the weekend is in custody after a gun battle with police on Monday. Ahmad Khan Rahami in Elizabeth, New Jersey was captured after firing at police officers in Lyndon, New Jersey. In addition to the two incidents, officials are probing a backpack containing bombs found in a New Jersey train station on Sunday. Well now joining us to discuss this is Chris Hedges. He?s a Pulitzer Prize winning journalist, a columnist at Truth Dig, he was a former Middle East Bureau Chief for the New York Times and has reported extensively from the occupied Palestinian territories. Thanks so much for joining us.

NOOR: So Chris let?s start off by getting your own connection to Elizabeth, New Jersey. Talk about that and the community there.

HEDGES: Well I first went to Elizabeth in the early 1990?s to do an investigative piece on police corruption where a kabul of police known as the family were planting drugs on young African American men and sending them to jail with a conviction rate of about 98%. Broke that story. Several of those police including a lieutenant were fired from the police force. Although none of the cases themselves were investigated. So a lot of those men are still sitting in jail. And then for the last few years, I?ve been teaching in prisons in New Jersey and working out of the Second Presbyterian Church in Elizabeth, basing that work there and have done things like run groups for ex-felons at that church site which is about 3 or 4 blocks from the Broad Street Station where those bombs were uncovered in Elizabeth this morning.

NOOR: And so Rahami was not listed on US terrorism bases. 3 US officials told Reuters. I want to talk about the response of the two major presidential candidates. But before we get there is this the type of attack that we can stop, that we can prevent. What should their response be?

HEDGES: Well their response should be the end of the occupation in the Middle East and the succession of saturation bombing by drones and military aircrafts and missiles in parts of Iraq and Syria and Pakistan and Yemen and Somalia. I?m actually surprised it took this long.

NOOR: So the major presidential candidates Donald Trump and Hillary Clinton traded jabs over who would be tougher on terrorism and who?s presidency ISIS would prefer. This is a clip of Hillary Clinton accusing Donald Trump of helping the Islamic State militants recruit more fighters.

HILLARY CLINTON: We know that a lot of the rhetoric we?ve heard from Donald Trump has been seized on by terrorist. In particular ISIS. They want to use that to recruit more fighters to their cause by turning it into a religious conflict.

HEDGES: Well the Clintons along with Barack Obama, along with George W. Bush are the people who created this process of endless war in the Middle East. Clinton was the chief lobbyist for the intervention in Libya itself. The rhetoric of a Trump, the rhetoric of a Clinton is largely irrelevant to ISIS. They don?t need it. People in cities like Raqqah are being attacked by sorties of US jets almost on a daily basis. Militarized drones are terrorizing people in whole parts of the Middle East. Cruise missiles launched primarily from ships onto Libya and other parts of Iraq and Syria. The rhetoric is the least of it. The kind of widespread killing that?s been going on now for 15 years has radicalized whole segments and is kind of the most potent recruiting weapon that the jihadist had. The rhetoric of a Trump or Clinton is I don?t think even a fact.

NOOR: So the suspect was born in Afghanistan, we just passed the 15th anniversary of the 9/11 attacks. We are approaching the anniversary of the US invasion of Afghanistan. What do you think that Americans should be reflecting on at this time when we?re trying to address the roots of terrorism?

HEDGES: Well the tragedy is that the media it?s partly because of their security situation. But also because of the collapse of the media in particular. The ability to carry out foreign coverage has very little idea of what?s happening in the Middle East. In countries like Iraq, Afghanistan, Syria, and the state terror that is triggering jihadist terror. It?s a big black hole. I think that we?re woefully unaware and it?s not our fault, it?s the fault of the press, of what?s been happening, what we?ve been doing, and why people would be pushed to this level of rage to strike back.

NOOR: And it seems like the resources the networks do have are used to endlessly have guests on that are just speculating without actually facts being known at the time or people that have no real knowledge of the issue. But another topic I wanted to ask you about is today it was announced that the major presidential debate at Hofstra University next week will exclude the third party candidate Jill Stein and Gary Johnson who are actually against US intervention and military occupation in the Middle East as you described it. Do you think that that?s something that people should be seizing on and demanding an increasing of this debate and a dialogue around these issues?

HEDGES: Well yes of course. The debate corporation is run by the two major political parties and intentional excludes any candidate it who critiques empire, critiques globalism, neoliberalism, austerity, all of those programs that have been carried out internally as an assault especially on the working class and the poor and increasingly the middle class. And also those people who would critique our military adventurism abroad. Those voices are just not heard. They?re not heard as you correctly pointed out by pundits, most of whom are on the payroll of companies like Raytheon or Haliburton or have financial vested interests of arm sales. I think it?s important to note that as with the expansion of NATO in Eastern Europe, it makes no logical sense to continue these wars. We?ve lost the war in Afghanistan, the Taliban controls more territory now than when we went in. The Afghan army is as useless as the Iraqi army. But it doesn?t matter in a way because the profits which have quadrupled since the attacks of 9/11 on these arms companies Bowing and Lockheed Martin and everything else, it?s a good business. And just as the expansion of NATO has opened up new arms markets, these wars in the Middle East, a tomahawk cruise missile costs about 1.1 million dollars. We dropped about 130 of them in the first few days in Libya. That?s half a billion dollars. So that?s kind of what it?s been reduced to. And the two candidates both Trump and Clinton are not going to challenge this futile and wasteful and tragic military endless kind of military operation throughout the Muslim world. And those candidates that will raise those questions of course are silenced. They don?t have a voice and that?s completely intentional on the part of the two parties.

NOOR: Alright Chris Hedges thanks so much for joining us.

William Brighenti is a Certified Public Accountant, Certified QuickBooks ProAdvisor, and Certified Business Valuation Analyst. Bill began his career in public accounting in 1979. Since then he has worked at various public accounting firms throughout Connecticut. Bill received a Master of Science in Professional Accounting degree from the University of Hartford, after attending the University of Connecticut and Central Connecticut State University for his Bachelor of Arts and Master of Arts degrees. He subsequently attended Purdue University for doctoral studies in Accounting and Quantitative Methods in Business. Bill has instructed graduate and undergraduate courses in Accounting, Auditing, and other subjects at the University of Hartford, Central Connecticut State University, Hartford State Technical College, and Purdue University. He also taught GMAT and CPA Exam Review Classes at the Stanley H. Kaplan Educational Center and at Person-Wolinsky, and is certified to teach trade-related subjects at Connecticut Vocational Technical Schools. His articles on tax and accounting have been published in several professional journals throughout the country as well as on several accounting websites. William was born and raised in New Britain, Connecticut, and served on the City's Board of Finance and Taxation as well as its City Plan Commission. In addition to the blog, Accounting and Taxes Simplified, Bill writes a blog, "The Barefoot Accountant", for the Accounting Web, a Sift Media publication.
View all posts by William Brighenti →
This entry was posted in Accountants CPA Hartford, Articles and tagged 2012 Democratic presidential primary, Ahmad Khan Rahami, Barack Obama, Chris Hedges, Chris Hedges says to stop terrorism we merely need to end the U.S. occupation of the Middle East, Donald Trump, Elizabeth New Jersey, Hillary Clinton, Jaisal Noor, September 19 2016 interview, terrorist attacks in U.S., The Real News Network, TRNN. Bookmark the permalink.