Bernie Sanders was never a real candidate but was merely this election’s sheepdog for Hillary Clinton to herd progressives back into the corral of the Democratic Party. 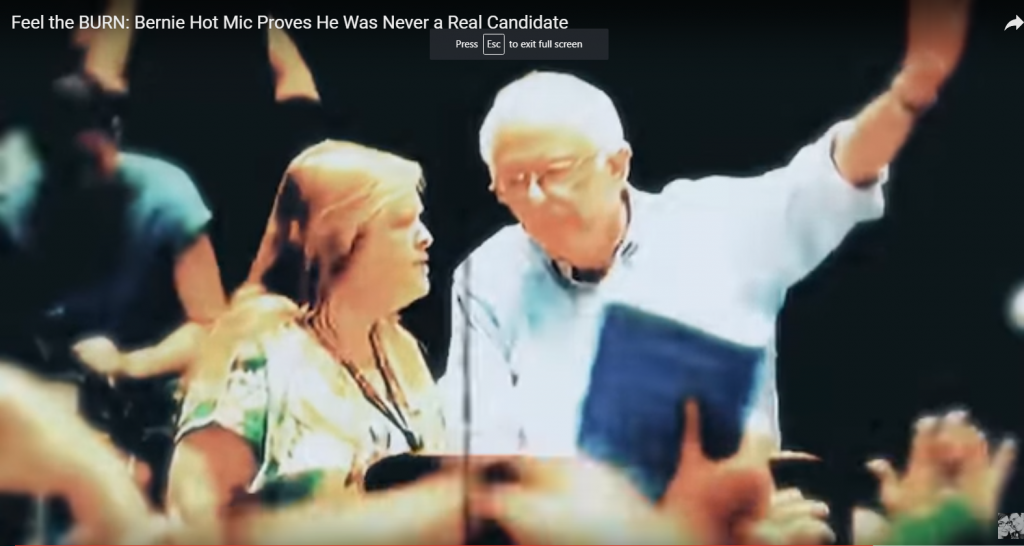 What’s been sickening more than one cycle since I’ve been paying attention to politics in my short life is how quickly seeming champions of the people will just just suddenly turn on everyone and betray them and endorse the very candidate that the people would love to see exiled from the country and put on an island like Napoleon or something.

Most of you have noted already that our elections are bread and circuses: it’s a big show, gets everyone involved, and makes them feel like they still have a voice in a completely corrupt, thoroughly corrupt, system. And what you’re seeing right now with the DNC is an inception level of corruption: it’s corruption inside corruption, wrapped inside more corruption because this whole Wikileaks thing came out and implicated the DNC and basically rigging the primaries against Bernie and for Hillary: something we all knew was going on anyway; it was really obvious, come on, with the improbable coin tosses, and card flips. It was a joke. It was a big joke, and everybody knew it.

But now there’s evidence of it, in print, and no one is addressing this, least of all Bernie. He’s basically taking it the same exact way Ron Paul took it, continued to, of course, soak up campaign contributions but just basically roll over and took it. Because these people, whatever deal they have made, whatever part they are playing, that’s already happened a long time ago. What’s sad is that the people who stand behind these people don’t understand that.

[Speaker]: “Bernie Sanders inspired a movement but with raw wounds reopened he was forced to play the role of healer, trying to soothe his increasingly frustrated supporters many of them moved to tears.”

It’s even more disgusting to watch those candidates liven up and act as if they’re speaking the truth, and just step aside and be quiet, and watch some of the worst people in history, some of the most ambitious and corrupt and power hungry people, assume their supposedly proper place in history.

You had Bernie pretty much booed almost completely off the stage yesterday: “We have got to defeat Donald Trump and we have got to elect Hillary Clinton and Tim Kaine.”

When he pulled his whole?—we have to get behind Hillary and vote for her so that we can destroy Trump?—thing which, if you think about this tactically, is the only way the establishment can get a Hillary Clinton presidency to pass with still somehow maintaining a semblance that our elections are a hundred percent fake and rigged, like we’re all pretty sure that they are, ok. The only way they’ve been able to do that is to completely demonize Trump in the press, talk about what a xenophobic monster he is, all talking points that they’ve come up with to make him just look like the most horrible person ever so that by the time they pull Bernie out from the people who are actually supporting the Democratic side of things, then they can say, “well, if you don’t want this horrible monster Trump to be President, you have no other hope, no other choice in the world, but Hillary Clinton.

By the way, very sad for Hillary Clinton that the only way, the only way, she can attain a presidency is through cheating, corruption, lying to people, and making them feel so desperate they have no other choice than to vote for her. It is really, really pathetic, and if she had a soul or feelings or humanity, she would, she would not be able to look at herself in the mirror.

After he’s basically booed off stage, what happened next is the mind-blowing part. You had Jane Sanders, Bernie’s wife, walk up to the podium and say something to him that was caught on the “hot mic”. Check this out.

Jane Sanders: “They don’t know your name is being put in nomination?—and that’s the concern here.”

See, they’ve tried to push the idea that Hillary is the presumptive nominee for weeks now and Bernie has jumped right along onto that bus. Even at this moment when he’s up there addressing all of these supporters who have believed in him, he’s not telling them that his name will be on the nomination.
It’s not gonna just be a piece of paper with a box on it that says Hillary Clinton, check here. That’s not actually what’s going on. He knows it and he’s standing up there telling them to vote for Hillary [and not for him since his name will be on the ballot for nomination] and not telling anyone anything. He’s not addressing WikiLeaks, and he’s not telling them that his name is going to be put in nomination.

This to me is blatant obvious proof of his complicity in this whole thing since the beginning.

I mean, Hillary made sure to get all possible real competition out of the way a long time ago. There are stories that came out about people getting threatened. Because it’s the only way she can be [President[, having the entire media as her PR firm, threatening competition out of the way, rigging the entire primary, cheating, lying, all that is the only way Hilary can attain the presidency. Tthat’s the only way she’s got. And Sanders has obviously been on board with this. And all these people that come and say, “but his voting record, he’s such a stand-up guy”: he’s getting on in years, ok, and maybe he decided to take a deal, but you can’t see this “hot mic”, see what just went down there, and ignore it.

Did he mention any of that to the people who want to vote for him in this room who were booing him off the stage? No. He sat there and said vote for Hillary.

And Hillary obviously knows the fix is in for her and has known forever.

Hillary Clinton: “I will be the nominee for my party, trust that. That is already done, in effect. There is no way that I won’t be.”

She keeps Debbie Wasserman Schultz around in the same way a bridezilla keeps around ugly bridesmaids because she does not want to be outshined by someone. The scary trolling Wasserman Schultz was forced to resign, what did Hillary do? She immediately hired her as her honorary campaign chair. Why? Because screw you, that’s why. Hillary doesn’t care what anybody thinks about anything. She does not care. She’s going to ascend the throne, whether you like it or not, whether the voters want to vote for her or not, it doesn’t matter. They will figure out a way. And that’s what this whole thing is.

What’s sad is to see how complicit Sanders is in it.

Just be another empty suit, another asset. That’s how easily we get played. They know the population gets angry and it’s a steam valve. It’s a vent. Is it ever really real? Well, they always know they’re just playing their part.

You just know from the gate because of how rigged this entire system is, because about how rigged our elections are, that you just know that he’s in on it: he has to be. And of course now we find out that he is.

And look at these people. Who did she go [to Vice President]: he’s like this little creepy goblin minion who looks like he will willingly cannibalize a baby if she snaps her fingers. It’s horrifying.

Actually makes me kind of proud to be an American, to see people not sitting down and taking it, and shouting and booing, and trying to say, “no, we’re not going to step aside and let someone as awful as this take over the country.” But what a letdown with these so-called leaders, with these misleaders:

Bernie Sanders: “Hillary Clinton will make an outstanding president and I am proud to stand with her tonight. Thank you all very much.”

William Brighenti is a Certified Public Accountant, Certified QuickBooks ProAdvisor, and Certified Business Valuation Analyst. Bill began his career in public accounting in 1979. Since then he has worked at various public accounting firms throughout Connecticut. Bill received a Master of Science in Professional Accounting degree from the University of Hartford, after attending the University of Connecticut and Central Connecticut State University for his Bachelor of Arts and Master of Arts degrees. He subsequently attended Purdue University for doctoral studies in Accounting and Quantitative Methods in Business. Bill has instructed graduate and undergraduate courses in Accounting, Auditing, and other subjects at the University of Hartford, Central Connecticut State University, Hartford State Technical College, and Purdue University. He also taught GMAT and CPA Exam Review Classes at the Stanley H. Kaplan Educational Center and at Person-Wolinsky, and is certified to teach trade-related subjects at Connecticut Vocational Technical Schools. His articles on tax and accounting have been published in several professional journals throughout the country as well as on several accounting websites. William was born and raised in New Britain, Connecticut, and served on the City's Board of Finance and Taxation as well as its City Plan Commission. In addition to the blog, Accounting and Taxes Simplified, Bill writes a blog, "The Barefoot Accountant", for the Accounting Web, a Sift Media publication.
View all posts by William Brighenti →
This entry was posted in Accountants CPA Hartford, Articles and tagged Bernie Sanders, Bernie Sanders fake, Bernie Sanders sold out, Bernie Sanders traitor, Bernie Sanders was never a real candidate but was merely this election's sheepdog for Hillary Clinton to herd progressives back into the corral of the Democratic Party, bogeyman, corruption, Debbie Wasserman-Schultz, Democratic Party, Democratic Primary, DNC, Donald Trump, Feel the BURN: Bernie Hot Mic proves he was never a real candidate, herding progressives back into Democratic corral, Hillary Clinton, hot mic, Jane Sanders, monster Trump, not real candidate, phony, Presidency, sheepdog, sheepdogging, They don't know your name is being put in nomination?—and that's the concern here, Tim Kaine, WikiLeaks. Bookmark the permalink.