If you think Donald Trump is bad now, wait and see how bad Hillary Clinton will be as President. 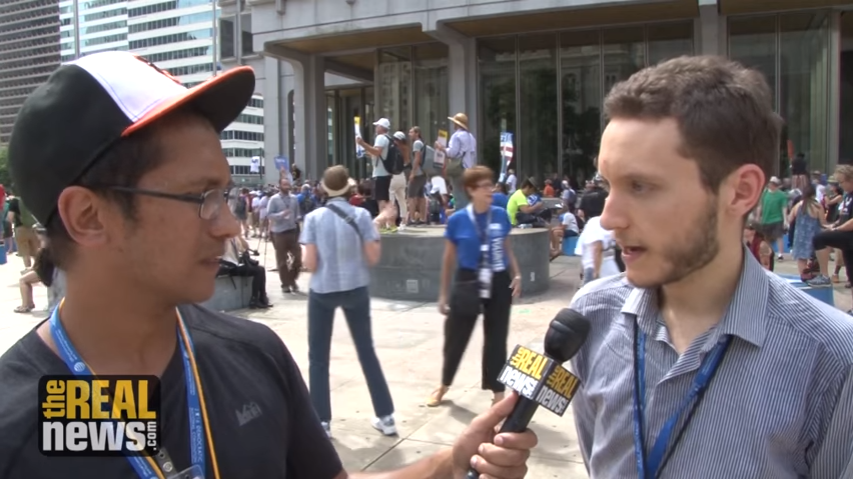 ‘Lesser of Two Evils’ Argument Not Resonating with DNC Protestors

JAISAL NOOR, TRNN PRODUCER: I?m Jaisal Noor for the Real News Network.
We?re here in Philadelphia in front of City Hall. We?re at a Bernie or Bust Protest. Dr. Jill Stein, the Green Party presidential candidate, just addressed the crowd of a couple hundred people. She got a rack of applause urging people to vote their conscious, vote to address the issues that are plaguing America, and not support Hillary Clinton or Donald Trump.

We?re now joined by Ben Norton. He?s a journalist for Salon.com. You?ve been here all week and you were at the RNC as well? Talk about why you?re here and what your impressions have been so far. You know, the first day of this convention ended last night and some controversy. Talk about what?s going on with you.

BEN NORTON: Well I think people in general, people on the inside of the convention and outside rank and file people, you know average people, workers are really tired of the few options they have available to them. I spoke to a lot of Sanders delegates last night and few of them are excited about supporting Clinton. Really the only argument that really prevails all of these conventions is the other side is bad so you have to support us. It?s a really dispiriting kind of environment. I see very few positive messages.

Michelle Obama last night tried to make her speech very positive in that way but a lot of it is if you listened to Sander?s speech it was Trump is such a horrible candidate that we must endorse Clinton to defeat Trump. And at the Republican convention it was Clinton is such a horrible candidate we must get behind Trump to defeat Clinton. I think seeing protests like this, they are very inspiring because you see Americans who are really demanding progressive change outside of the establishment who refuse to say we must choose one of these two evils. And they say you know we live in a democracy and we want to choose an option that actually appeals to us and choose a politician who actually may represent our interest.

NOOR: So the counter point, and some of the people we?ve talked to share your view, I mean share the view you just expressed. But also there?s people that say we don?t?we want to build a third party but we want to continue grassroots movements but we have to defeat Trump first. And that?s also what Sanders message was because?and others have made this point that if Trump is elected then he?s going to set progress back so far that it?s going to hurt every marginalized community across this country.

But that doesn?t seem to be resonating with some people and even people in swing states. It?s?even people we?ve talked to in Philadelphia, Pennsylvania and in Cleveland, in Ohio. Even though they know it?s a swing state they say they?re still going to vote their conscious. So now Trump is doing the best he?s ever done in national polls and Hillary has her highest unfavorability ratings she?s had in this election so far.

NORTON: Well I think I?m pretty confident that Hillary?s going to win. Trump is too extreme of a candidate. Even aside from that, I?m not very convinced that a Trump candidacy would be an apocalyptic event. I think it would be bad. I also think a Clinton presidency would be bad. I think we have to think about it not just in terms of who?s in office but what that effect is on the larger political [melee]. Because if you look at the Bush administration, you look at the Obama administration, there are many similarities especially on foreign policy, national security, clamp down on journalist, etc. But one of the primary differences between them is the grassroots activism. And if you look at the Bush administration there was enormous grassroots pressure against the administration.

NOOR: Especially against the Iraq War. An unprecedented amount of global protests before the war even started which never really happened before.

NOOR: So the–some of the issues that people have raised are the next president will make at least one or maybe more Supreme Court picks. They?ll have to act on climate change with urgency. Now we saw the massive protest against fracking and environmental change on Sunday. So people aren?t happy in the grassroots with Clinton. Especially with the pick of Tim Kaine as Vice President, with his track record. But Trump didn?t even mention climate change with his speech?with accepting the Republican nomination. So as far as those two issues go for example, some Clinton supporters are hesitant, people say they?re going to back Clinton. They see those two issues as apocalyptic in a way.

NORTON: Well absolutely. Climate change is there?s no question, the biggest problem we face as a planet. I think that it?s imperative that we do something about it. That said, Clinton her record on climate change and fossil fuels and such is not a positive one. She?s criticized fracking now but in the past when she was Secretary of State and before, she was supportive of fracking. She now claims to oppose the TPP but again she previously supported it which would also be horrific for the environment. And yea Clinton, she actually accepts the climate change as a real thing. But that?s such a basic bare standard that it?s not enough. We really are facing catastrophic–impending catastrophic situation with climate change and we do need systemic change and serious action. And 4 years or 8 years of a Clinton presidency I think will do very little to stop that. And I also think one of the discussions that?s kind of removed from a lot of this is looking at things in the long term and not just the short term. There?s no question that Trump would be horrific as a candidate but if we have 4 or 8 years of Clinton of more wars, of more austerity, of another economic crisis, and potential bailouts of banks and large corporations etc., you know you think Trump is bad now? Wait for what we?ll see in 4 or 8 years.

I mean this is not a problem that is going to go away. The Republican Party has lurched to the far right and this is the future of the Republican Party. So I think we really need to talk about how we can pressure all politicians but especially the Democratic Party and say, we?re not just going to obey. We?re going to push you from the left and say we need you to adopt these policies. We need you to ban fracking, we need you to move toward renewable energy, and the Green Party and the Sanders movement are doing these kinds of things among other kind of parties. And if we don?t pressure the Democratic Party, I?m afraid and I think it?s quite possible that the Democratic Party won?t take the steps that we need to address climate change and we?ll still face the climate catastrophe that we still face now.

NOOR: I think that?s a really good analysis because regardless of who?s in office it?s going to be up to the grassroots movements to pressure them. Some would say that Clinton would be [acceptive] to grassroots pressure but again the point you raised about where that movement is going to go, where the movement went that was so massive under Bush was?it sort of evaporated under Obama. That?s something the movement?s still going to have to deal with going forward. Ben Norton thanks so much for being with us.

NORTON: Thanks. Glad to be here.

William Brighenti is a Certified Public Accountant, Certified QuickBooks ProAdvisor, and Certified Business Valuation Analyst. Bill began his career in public accounting in 1979. Since then he has worked at various public accounting firms throughout Connecticut. Bill received a Master of Science in Professional Accounting degree from the University of Hartford, after attending the University of Connecticut and Central Connecticut State University for his Bachelor of Arts and Master of Arts degrees. He subsequently attended Purdue University for doctoral studies in Accounting and Quantitative Methods in Business. Bill has instructed graduate and undergraduate courses in Accounting, Auditing, and other subjects at the University of Hartford, Central Connecticut State University, Hartford State Technical College, and Purdue University. He also taught GMAT and CPA Exam Review Classes at the Stanley H. Kaplan Educational Center and at Person-Wolinsky, and is certified to teach trade-related subjects at Connecticut Vocational Technical Schools. His articles on tax and accounting have been published in several professional journals throughout the country as well as on several accounting websites. William was born and raised in New Britain, Connecticut, and served on the City's Board of Finance and Taxation as well as its City Plan Commission. In addition to the blog, Accounting and Taxes Simplified, Bill writes a blog, "The Barefoot Accountant", for the Accounting Web, a Sift Media publication.
View all posts by William Brighenti →
This entry was posted in Accountants CPA Hartford, Articles and tagged 'Lesser of Two Evils' Argument Not Resonating with DNC Protestors, Ben Norton, DNC protesters, Donald Trump, grassroots movements, Hillary Clinton, If you think Donald Trump is bad now, If you think Donald Trump is bad now wait and see how bad Hillary Clinton will be as President, Jaisal Noor, journalist for Salon.com, Salon, Salon.com, The Real News Network, TRNN Producer, wait and see how bad Hillary Clinton will be as President.. Bookmark the permalink.