Posted on November 26, 2015 by William Brighenti 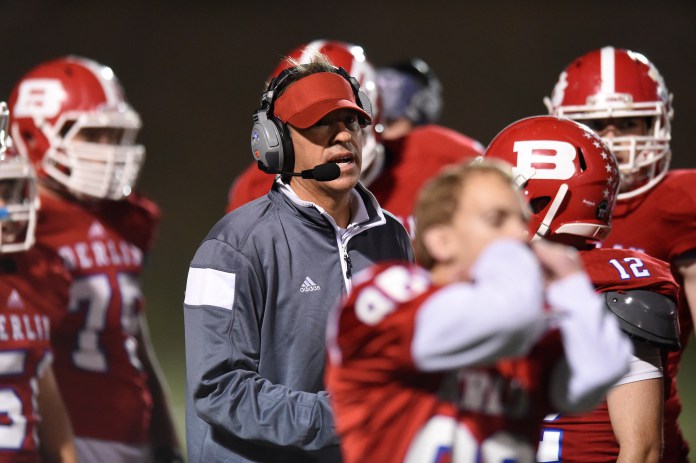 Dennis House: The Berlin High School football recruiting scandal continues tonight. Eyewitness News has learned it cost you the taxpayer tens of thousands of dollars. Eyewitness News reporter Matthew Campbell is live at Veterans Memorial Stadium in New Britain where the rivalry between Berlin and New Britain is about to go down.

Matthew Campbell: The game’s gonna kick in about an hour or so and let me tell you the bad blood will be boiling over between New Britain and Berlin. Take a look behind me as the band just actually came into the stadium. There’s two separate entrances: one for New Britain and one for the Berlin fans as well.

And extra security has been added here all after this recruiting scandal that was uncovered by New Britain. Now if it wasn’t uncovered, taxpayers in Berlin would continue paying for players that didn’t live there.

As another chapter in the annual wishbone rivalry is about to be written, an asterisk will forever be placed to this year’s game after the CIAC Connecticut Interscholastic Athletic Conference discovered Berlin was recruiting players from New Britain.

Stephanie Santa: “…I feel very sorry for these boys because they were given something and then it was taken away.”

Matthew Campbell: The four ineligible players from New Britain were taking away spots on the field and seats in the classroom that were always intended for kids from Berlin.

Carol Argazzi: “…weren’t able maybe to have a position on the team because somebody else unfairly took it from them.”

Matthew Campbell: The CIAC handed down punishments this week. The four players from New Britain are banned from ever playing again. Berlin head coach John Capodice suspended by the district. But the scandal goes far beyond the gridiron. It hits taxpayers in their wallets.

Dr. Karissa Niehoff: “Each district is a little bit different but it for a family to come in and take advantage of another school’s resources like that, you know, if you do it for multiple years, you’re talking a lot of money.”

Matthew Campbell: In Berlin the superintendent confirms that each high school student cost taxpayers $14,982 a year. In these four cases that’s money that was being spent on New Britain kids seemingly just to gain an edge here on the field.

Matthew Campbell: Taxpayers will foot another bill. The CIAC fined Berlin $4,000: a thousand for each violation. The team also had to vacate all wins. So the majority of players, all of whom are innocent, have no shot at the playoffs.

Matthew Campbell: A live look here at Veterans Memorial as this game will kick in about an hour. And this game will be played for pride. Roaming the sidelines for Berlin will be assistant coach Rob Levesque. The long-term future for Coach Capodice: that’s still unknown.

That’s the latest live here with the mobile newsroom in New Britain.

William Brighenti is a Certified Public Accountant, Certified QuickBooks ProAdvisor, and Certified Business Valuation Analyst. Bill began his career in public accounting in 1979. Since then he has worked at various public accounting firms throughout Connecticut. Bill received a Master of Science in Professional Accounting degree from the University of Hartford, after attending the University of Connecticut and Central Connecticut State University for his Bachelor of Arts and Master of Arts degrees. He subsequently attended Purdue University for doctoral studies in Accounting and Quantitative Methods in Business. Bill has instructed graduate and undergraduate courses in Accounting, Auditing, and other subjects at the University of Hartford, Central Connecticut State University, Hartford State Technical College, and Purdue University. He also taught GMAT and CPA Exam Review Classes at the Stanley H. Kaplan Educational Center and at Person-Wolinsky, and is certified to teach trade-related subjects at Connecticut Vocational Technical Schools. His articles on tax and accounting have been published in several professional journals throughout the country as well as on several accounting websites. William was born and raised in New Britain, Connecticut, and served on the City's Board of Finance and Taxation as well as its City Plan Commission. In addition to the blog, Accounting and Taxes Simplified, Bill writes a blog, "The Barefoot Accountant", for the Accounting Web, a Sift Media publication.
View all posts by William Brighenti →
This entry was posted in Accountants CPA Hartford, Articles and tagged BERLIN HIGH SCHOOL FOOTBALL RECRUITING SCANDAL COST BERLIN CONNECTICUT TAXPAYERS TENS OF THOUSANDS OF DOLLARS, BERLIN HIGH SCHOOL FOOTBALL TEAM VIOLATIONS COST BERLIN CT TAXPAYERS TENS OF THOUSANDS OF DOLLARS EVERY YEAR, Carol Argazzi, Chanel 3 News, Dennis House, DR. KARISSA NIEHOFF, John Capodice, Matthew Campbell, Stephanie Santa, WFSB Eyewitness News. Bookmark the permalink.