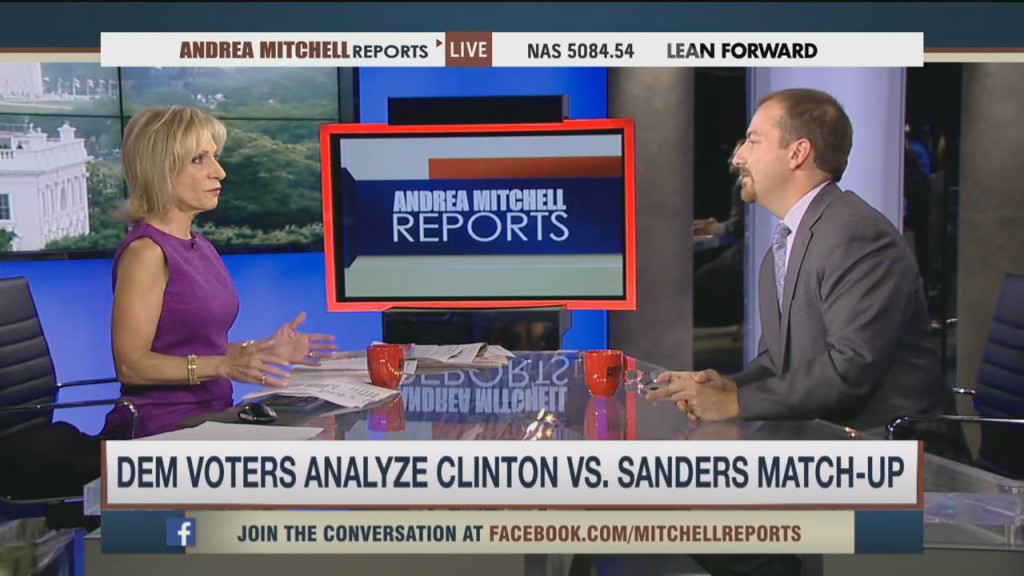 Andrea Mitchell: Let’s talk about the democrats because to be counter-intuitive contrary to what has been written recently in the New York Times front page about Bernie Sanders and older folks, I am hearing more and more from young people who are really intrigued by Bernie Sanders.

Chuck Todd: That’s right, and I think it’s more of, you know, Hillary Clinton’s reputation is very cautious; okay, she’s risk-averse. When she finally takes a position, just watch her. And look at how she’s campaigned:  everything’s been very risk-averse. You know, God forbid, she would ever take a question from you. You know, that type of thing. It is very risk averse.

Bernie and the young millenials, they’re not risk averse. And so I think they’re going to gravitate to a candidate that might be a little more rambunctious, and certainly Bernie Sanders is.

And I think the fascinating thing is three months ago the talk was, is Martin O’Malley going to be enough and how could he be the chief challenger.  I’m wondering now how does Martin O’Malley get past Bernie Sanders. And I don’t know if he can.  Will he ever be seen as a true blue progressive to those who really want a progressive to send a message. I don’t think they don’t necessarily think that a progressive would beat her in the primary but I think some progressives would like Bernie Sanders to force Hillary Clinton to answer to the left a little bit more.

Andrea Mitchell: And a couple of quick points about Hillary Clinton.  They say that they want to raise a hundred million dollars this year for primary money only; [they say] the things that have been written about two billion dollars is crazy.  [They say] It will be a hundred million–the same as Barack Obama in both cycles, that’s excluding super PACs. So that’s twenty seven hundred dollar contributions.

They say they have a fifty-state track strategy; they are serious about fighting in the primaries; they’re serious about Iowa; they are trying to lower expectations, saying that, well, nobody except Tom Harkin and the sitting president running has gotten more than 50 percent in the Iowa caucuses. They are trying to low-ball that when she came in third last time around.

And in South Carolina it is really interesting the way she tried to take on both the race and the gender issue. She was campaigning among African-American women and other women as well trying to fix what Bill Clinton messed up so badly in a race where he got accused by many including Jim Clayburn of playing the race card.

Part of that is he’s a Vermont politician, and he’s never really had to campaign for African-American vote, campaign for Hispanic vote. And this is probably easily like, if things go really bad with the progressive wing for Hillary Clinton on economics and all these things, you know, she still has this. And I think if you look at the way Sanders is running and you’re saying he can intellectually give her a run for her money with sort of liberal white elites but the rank-and-file where the Democratic primary voter is, he is not as disconnected yet to African-American voters or Hispanic voters, and I don’t know how he gets there.

William Brighenti is a Certified Public Accountant, Certified QuickBooks ProAdvisor, and Certified Business Valuation Analyst. Bill began his career in public accounting in 1979. Since then he has worked at various public accounting firms throughout Connecticut. Bill received a Master of Science in Professional Accounting degree from the University of Hartford, after attending the University of Connecticut and Central Connecticut State University for his Bachelor of Arts and Master of Arts degrees. He subsequently attended Purdue University for doctoral studies in Accounting and Quantitative Methods in Business. Bill has instructed graduate and undergraduate courses in Accounting, Auditing, and other subjects at the University of Hartford, Central Connecticut State University, Hartford State Technical College, and Purdue University. He also taught GMAT and CPA Exam Review Classes at the Stanley H. Kaplan Educational Center and at Person-Wolinsky, and is certified to teach trade-related subjects at Connecticut Vocational Technical Schools. His articles on tax and accounting have been published in several professional journals throughout the country as well as on several accounting websites. William was born and raised in New Britain, Connecticut, and served on the City's Board of Finance and Taxation as well as its City Plan Commission. In addition to the blog, Accounting and Taxes Simplified, Bill writes a blog, "The Barefoot Accountant", for the Accounting Web, a Sift Media publication.
View all posts by William Brighenti →
This entry was posted in Accountants CPA Hartford, Articles and tagged African American voter, Andrea Mitchell, Andrea Mitchell Reports, Bernie Sanders, Chuck Todd, Chuck Todd tells Andrea Mitchell that Hillary Clinton will win the African-American and Hispanic vote in spite of the intellectual appeal of Bernie Sanders to liberal white voters, Democratic voters analyze Clinton vs. Sanders match-up, Hillary Clinton, Hispanic voter, intellectual appeal to liberal white elites, liberal white elites, liberal white voters, Mitchell Reports. Bookmark the permalink.