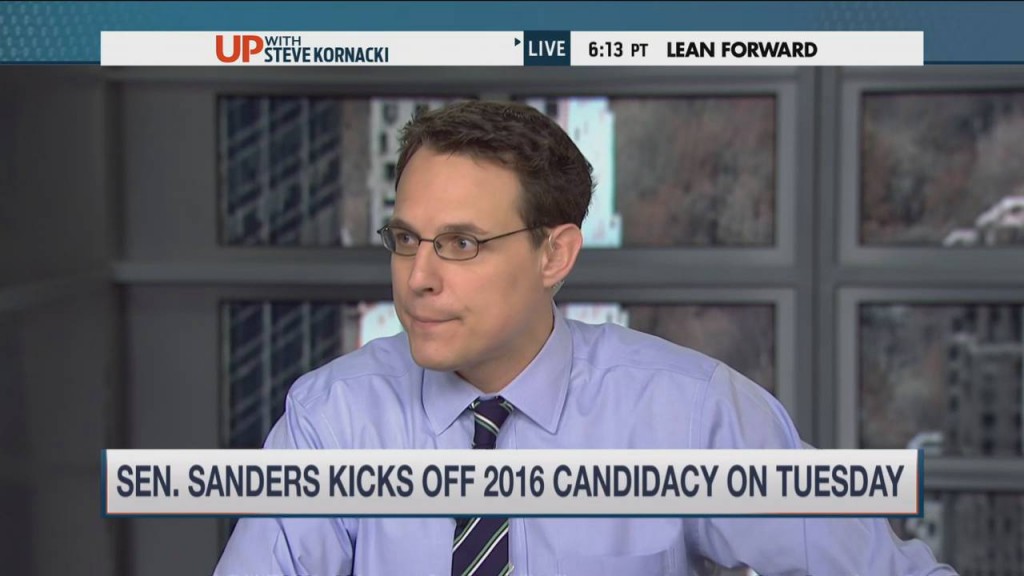 Bernie Sanders does not have to win the Iowa primary; however, if the gets 35%, 40%, or 45% of the vote, that would set him up nicely for the New Hampshire primary, next door to his state of Vermont.

Steve Kornacki: There is news this week happening on the democratic side.  You’re going to have two candidates. It looks like getting into the race running against Hillary Clinton, Bernie Sanders, is going to do this in Vermont on Tuesday.

…I think there’s some real energy behind Sanders right now.

…There is an authenticity to him, of frustration with the system, I think there is something there that connects with [many people]….

Steve Kornacki:  They know he is upset with the system, basically [wants to] blow up the system.  Robert Costa, what do you think of that comparison between Bernie Sanders and Ron Paul?

Robert Costa:  I think Sanders could actually be a more potent political figure than Ron Paul.

When I was in Cedar Falls, Iowa, this week following Secretary Clinton, there was a group of about a dozen college students outside all supporting Bernie Sanders.  There was a group of labor organizers holding signs pressuring Clinton on the trade deal and very disappointed with her lack of a stance.

There is a movement, especially in a place like Iowa that even Clinton has now acknowledged that Bernie Sanders could get 35, 40, maybe even 45% if it becomes a grassroots movement.  He doesn’t need to win Iowa but if he can show in Iowa, then he goes into his neighboring state of New Hampshire and he could become a problem.

Steve Kornacki:  There it is.  I mean, that’s the thing.  It does set up.  The first two states, Iowa with the populist grassroots, New Hampshire, right next door to Vermont, northern New Hampshire sharing the Burlington media market, starts to make you say what if, a little bit….

William Brighenti is a Certified Public Accountant, Certified QuickBooks ProAdvisor, and Certified Business Valuation Analyst. Bill began his career in public accounting in 1979. Since then he has worked at various public accounting firms throughout Connecticut. Bill received a Master of Science in Professional Accounting degree from the University of Hartford, after attending the University of Connecticut and Central Connecticut State University for his Bachelor of Arts and Master of Arts degrees. He subsequently attended Purdue University for doctoral studies in Accounting and Quantitative Methods in Business. Bill has instructed graduate and undergraduate courses in Accounting, Auditing, and other subjects at the University of Hartford, Central Connecticut State University, Hartford State Technical College, and Purdue University. He also taught GMAT and CPA Exam Review Classes at the Stanley H. Kaplan Educational Center and at Person-Wolinsky, and is certified to teach trade-related subjects at Connecticut Vocational Technical Schools. His articles on tax and accounting have been published in several professional journals throughout the country as well as on several accounting websites. William was born and raised in New Britain, Connecticut, and served on the City's Board of Finance and Taxation as well as its City Plan Commission. In addition to the blog, Accounting and Taxes Simplified, Bill writes a blog, "The Barefoot Accountant", for the Accounting Web, a Sift Media publication.
View all posts by William Brighenti →
This entry was posted in Accountants CPA Hartford, Articles and tagged Bernie Sanders, Bernie Sanders does not have to win the Iowa Primary to set up his race, grassroots movement, Iowa populist grassroots, Iowa primary, Robert Costa, Steve Kornacki. Bookmark the permalink.