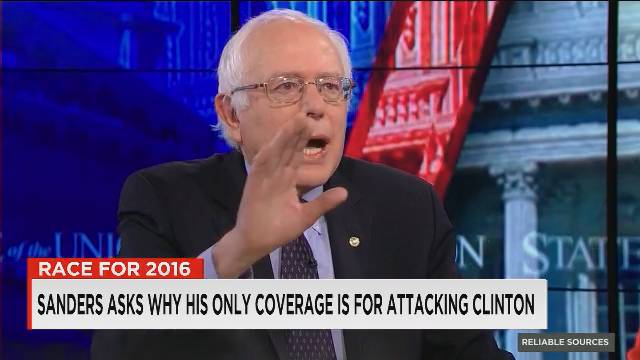 The Barefoot Accountant of Accountants CPA Hartford, Connecticut, LLC, presents the video and transcript of Senator Bernie Sanders’ appearance on CNN Reliable Sources, hosted by Brian Stelter, on May 24, 2015.

STELTER: Now, coming up here on RELIABLE SOURCES, attacking Hillary Clinton, we could call it a common sport for Republican presidential wannabes. But one non-Republican candidate says he thinks it’s the only way he can get airtime here on CNN and elsewhere. Hear what he says about that right after the break.

STELTER: We are back with more RELIABLE SOURCES. And this next segment is about something you probably noticed about

election coverage. Each week, a new presidential candidate jumps into an already crowded race, mostly on the Republican side. But there are also declared candidates besides Hillary Clinton on the Democratic side, including Bernie Sanders and soon Martin O’Malley.

Clinton has been taking a lot of heat from the media for ignoring the media, and I think that heat is perfectly appropriate. She did answer some questions from reporters early in the week and she says she’s now planning a big campaign event in mid-June.

Meanwhile, Bernie Sanders has appeared on multiple networks. He’s willing to answer almost any question, but it seems sometimes all anyone wants to talk about is Hillary.

What got me thinking about this is what Sanders said last Sunday here on CNN on “STATE OF THE UNION.”

SEN. BERNIE SANDERS (I), VERMONT: The American people want to hear serious discussions why they’re working longer hours for lower wages. They want to know about why year after year, we have these disastrous trade agreements, why the rich get richer and everybody else gets poorer? Are you and the media prepared to allow us to engage in that serious debate, or do I have to make media attention by simply making reckless attacks on Hillary Clinton or anybody else? I don’t believe in that.

STELTER: So, are journalists giving that campaign a fair shake?

Senator Bernie Sanders is here with me now on set to talk about that. Thanks for being here.

STELTER: It’s rare to hear a candidate or any politician really talk about the systemic issues in the press the way you did last week. I kind of lit up when I heard it, and I wondered, is it a winning strategy for you to be going at the press?

SANDERS: Look, I don’t know if it’s a winning strategy or not, but this is what I do know: the middle class of this country is disappearing despite the fact that people are working longer hours and they’re earning lower wages. We have seen an explosion in technology and productivity and yet all of the increase in income and wealth is going to the top 1 percent. Do you think that that’s an important issue to discuss?

According to the scientific community, climate change is the great planetary crisis we now face. Do you think we might want to be discussing that issue?

You have the top 1/10th of 1 percent now owning more wealth than the bottom 90 percent. I’m the ranking member of the budget committee. I dealt with the Republican budget which throws 27 million people off of health insurance, cuts educational programs by tens of billions of dollars, gives tax breaks to billionaires. Do you know how much coverage that got, outside of the political gossip? Virtually nothing.

Last year, I had the president of CBS, NBC, ABC — and we talked to them. Why is it you’re not covering climate change significantly? OK?

STELTER: So, what happened in that meeting?

SANDERS: Well, actually, a couple weeks later, there was a lot of discussion about climate change. But the scientific community is virtually unanimous in telling us that climate change is real, already causing devastating problems and that we have to reverse course. Do you think we’re seeing that kind of discussion in the media?

STELTER: Some Republicans will hear about that meeting you had with the presidents of some of the networks and say — the news divisions of the networks — and say that sounds like some sort of inappropriate coordination between the government and the press.

SANDERS: Inappropriate coordination. To ask them, well, we’re not discussing the major planetary crisis facing us? I don’t think so.

STELTER: But the rebuttal would be, the press should make up its own mind collectively about what should be a priority to be covered.

SANDERS: The answer is, of course, the American people and elected officials can weigh in as well. No one is telling them, no one is forcing them.

But when the scientific community tells us something is enormously important, maybe, just maybe, we may want to be discussing it.

SANDERS: I think we are doing pretty well. And I think the media — we have gotten more serious discussion on our issues than I might have thought about.

But this is what I worry about. In terms of campaign coverage…

SANDERS: … there is more coverage about the political gossip of a campaign, about raising money, about polling, about somebody saying something dumb, or some kid works for a campaign sends out something stupid on Facebook, right? We can expect that to be a major story.

But what your job is, what the media’s job is, is to say, look, these are the major issues facing the country. We’re a democracy. People have different points of view. Let’s argue it.

STELTER: Fundamentally, you’re describing what is the systemic issue in press, in the nation’s news media, which is an interesting spectacle over policy.

SANDERS: To me, it is astounding. And correct me if you think I’m wrong. When you have ABC, CBS, and NBC not devoting one minute to the most significant trade agreement in the history of the United States of America, help me out, help me out. Give me an explanation.

STELTER: They might say they’re covering it on the Web site.

STELTER: They might say there are niche outlets that can do a better job covering it in this day and age on the Internet.

SANDERS: Not a good answer.

You cannot ignore the fact that Citizens United is undermining our democratic way of life. Now, there are two sides to the story. I’m not saying everybody has got to agree with me, but have that issue, have that debate. That’s what elections should be about.

STELTER: Some people might say, how do you do that in a way that keeps people watching, that gets people stay tuned and not turn the channel?

STELTER: It’s always disappointing to see how many people are wrong with their answers.

SANDERS: Sixty-three percent of the people in this country did not know that answer.

Who bears responsibility for that? Does the media bear any responsibility? How do you have a serious discussion? If you don’t like what’s going on in Washington, which nobody does, who are you going to Plame if you don’t know which party controls what? So I think that, instead of coming up with the next news of the

moment, breaking news, there was an automobile accident, a cat got run over, here is breaking news. For 40 years, the American middle class has been disappearing and the rich have been getting richer. Why?

STELTER: I have an idea for you.

SANDERS: All right. Are you offer — are you making me that offer on behalf of CNN?

SANDERS: I accept it.

STELTER: But it sounds like you have got some ideas.

SANDERS: I just think that, as a nation, no matter what our political point of view is, I would hope that we are concerned about the state of American democracy. We need serious discussion about serious issues.

STELTER: I want to briefly go back to the issue about Hillary Clinton. I don’t want to become a parody of this conversation by focusing on it, because that would miss the point.

STELTER: But I wonder what it’s been like for the past few weeks, as you have officially declared? Do you wake up some mornings and think, well, the way I’m going to get attention today is to criticize Hillary Clinton?

STELTER: Are you leaning in to that reality of the media?

SANDERS: You’re looking — of course Hillary Clinton and anybody else deserves criticism. When you have different points of view, I guess that’s what criticism is about.

That’s what democracy is about. But taking cheap shots at people, making it personal, I don’t think that’s what politics should be about.

STELTER: Senator Sanders, thank you for being here this morning.

William Brighenti is a Certified Public Accountant, Certified QuickBooks ProAdvisor, and Certified Business Valuation Analyst. Bill began his career in public accounting in 1979. Since then he has worked at various public accounting firms throughout Connecticut. Bill received a Master of Science in Professional Accounting degree from the University of Hartford, after attending the University of Connecticut and Central Connecticut State University for his Bachelor of Arts and Master of Arts degrees. He subsequently attended Purdue University for doctoral studies in Accounting and Quantitative Methods in Business. Bill has instructed graduate and undergraduate courses in Accounting, Auditing, and other subjects at the University of Hartford, Central Connecticut State University, Hartford State Technical College, and Purdue University. He also taught GMAT and CPA Exam Review Classes at the Stanley H. Kaplan Educational Center and at Person-Wolinsky, and is certified to teach trade-related subjects at Connecticut Vocational Technical Schools. His articles on tax and accounting have been published in several professional journals throughout the country as well as on several accounting websites. William was born and raised in New Britain, Connecticut, and served on the City's Board of Finance and Taxation as well as its City Plan Commission. In addition to the blog, Accounting and Taxes Simplified, Bill writes a blog, "The Barefoot Accountant", for the Accounting Web, a Sift Media publication.
View all posts by William Brighenti →
This entry was posted in Accountants CPA Hartford, Articles and tagged Accountants, Accountants CPA Hartford Connecticut LLC, barefoot accountant, Berlin Connecticut, Bernie Sanders, Brian Stelter, Certified Public Accountants, CNN, CNN Host, CNN Reliable Sources, Hartford Connecticut, Hillary Clinton, May 24 2015, media press campaign coverage, Race to 2016, Reliable Sources, Sanders asks why his only coverage is for attacking Clinton, Sanders slams press coverage CNN, Senator Bernie Sanders appeals to the media to cover the serious issues of our country instead of political gossip, Senator Bernie Sanders appeals to the media to cover the serious issues of our country instead of political gossip during political campaigns, Stelter, William Brighenti CPA. Bookmark the permalink.