The Willis Report:  And tonight’s stunning accusation against Intuit, the maker of Turbotax, the popular tax preparation software.  Two whistleblowers claim that Intuit knew that criminals used its tax software to file fraudulent returns and allowed that to happen.  And that the company is making money off the fraud.

Now Intuit for its part denies the accusations and says that the company is committed to fighting tax fraud.  One of the whistleblowers joins me now:  Shane McDougall.  He used to work in Intuit as a principal security engineer.  Also joining me is Adam Levin, founder of Identity Theft 911.  Welcome to you both.

Shane, these allegations are surprising, astonishing.  Tell us who is to blame for people having their refunds stolen when they use Intuit software.

Shane McDougall:  Ultimately the hackers are to blame, but Intuit and I am going to insert other industry leaders are to blame.  Intuit knew that fraud was happening, and they deliberately rolled back the protections, rolled back the alerting of the IRS, so that more fraudulent returns would get through that they could book as revenue.

And this way, returns that made it through but then the nonpayment of the refund transfer was … sent back by the IRS–they didn’t pay it in full–Intuit writes that off as bad debt.  So they get it coming and going. 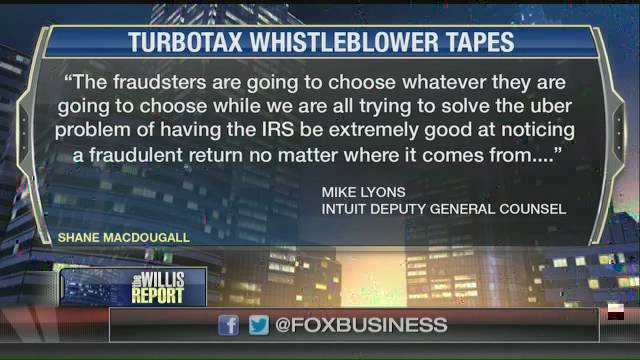 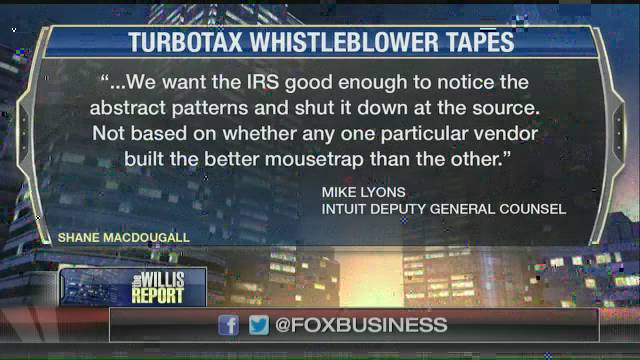 Conference call to one of the executives of Intuit, Mike Lyons, Intuit Deputy General Counsel:  “The fraudsters are going to choose whatever they are going to choose while we are all trying to solve the uber problem of having the IRS be extremely good at noticing a fraudulent return no matter where it comes from….We want the IRS good enough to notice the abstract patterns and shut it down at the source.  Not based on whether any one particular vendor built the better mousetrap than the other.”

Willis:  Adam, you look at this all the time.  The IRS, of course, is in charge of making sure that tax returns are true, and Intuit, for its part, says it’s not our job to monitor this.  What’s your response?

Adam Levin:  I think it’s everybody’s job.  Every time any corporation doesn’t properly secure personal identifying information for people, any time that any corporation is really part of a problem, whether it created it or not, we’re in this together.  Without collaboration, cooperation, communication, without sharing threat assessment information, we’re never going to get a handle on this.

And one last thing on this, combine that with the fact that because of sequestration, the IRS has actually been cut back, which forced it to cut back its enforcement activities.

Willis:  That’s their excuse, that they don’t have enough money to do what they need to do. 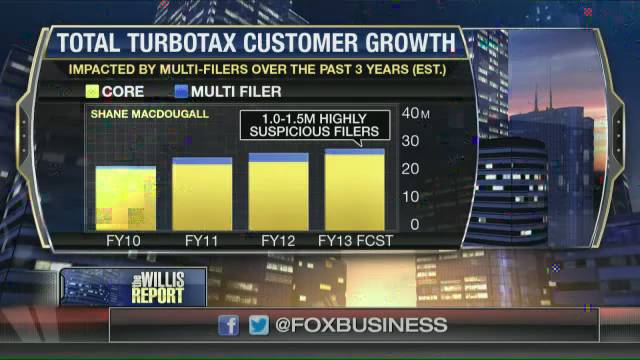 …Chart “Total Turbotax customer growth”.  What you see in this chart is an incredible boom in what’s called multi filer customer growth.  That’s really the suspicious filer out there.  You see that grow over time.  Why did that happen to Turbotax?  Is it just because they are the biggest guy on the block or were they really doing something that courted that business?

Shane McDougall:  If you listen to the rest of that tape, you’ll literally hear the deputy counsel and also the director of the company talking about how they had cracked down on fraud, they saw their revenue drop, the amount of tax fraud reported to the IRS did not go down, so they said, “Well, you know, all we did was the tax fraud went somewhere else.”

And the reality is they did have the ability to cut back on fraud:   in fact, they did, and they saw the fraud go elsewhere.   So what they did was roll back the alerting of the IRS and literally they rolled back the protections, the things that were shutting fraud down.  They literally say in that tape that fraud fell off a cliff.  It can’t be any clearer than that.  And the very fact that they had stopped the fraud, then allowed it again, to me makes them accessories before the fact.

Willis:  …There’s a lot of interest in this story. …a lot of people are investigating this. 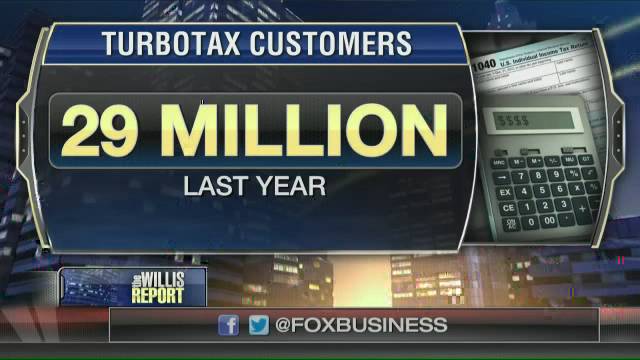 Turbotax is huge:  29 million customers last year.  If there’s going to be fraud in the system, it is going to be right through Turbotax because it’s so big. 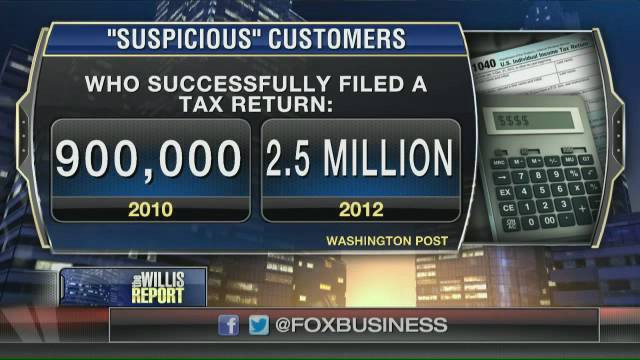 Adam:  That tells me that the filtering systems are not filtering.  And as was said, when they see suspicious activity–and they see, for instance, multiple people using the same social security number–what does someone have to do?  Run a billboard in front of you to get you to do something about it?

Willis:  Is it that hard to track down?  Are you telling me it should be easy to see?

Adam:  It should be easier to see than apparently it is.  There’s no excuse for this.  That we all have to toughen up, we have to tighten up:  states, the IRS, the tax preparers, and the self tax preparation organizations like Turbotax. 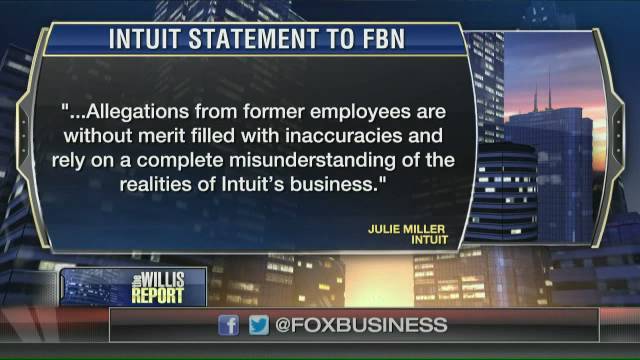 Intuit Statement to FBN from Julie Miller at Intuit:  “…Allegations from former employees are without merit filled with inaccuracies and rely on a complete misunderstanding of the realities of Intuit’s business.”

Shane:  That graph that you showed earlier was from a planning document that went all the way up to the CEO.  And if you look at the very last chart, they not only knew how much fraud happened in the past, if you compare the numbers in that chart to what the actual report to the SEC, the numbers align perfectly.

Willis:  Shane, you say they’re baking it into that numbers, and that goes basically to your allegation essentially that this is something that they are banking on, they actually are counting on as revenues.

Adam:  You need to file early.  And you need to make sure that when you use these tax preparation services, you use long and strong alphanumeric passwords that can’t be easily deciphered.  You cannot use user name and password universally through your network of social networking, emails, financial services.  Tax should be very very special.  And also don’t save any tax preparation on your computer:  put it on an encrypted thumb drive and when you finish using whatever, don’t keep it on your computer because your computer could get hacked.

Shane:  Better yet, file by paper.

The Barefoot Accountant:  The above-mentioned “transcript” is not complete and may contain errors.  Please refer to the video tape for completeness and accuracy.

William Brighenti is a Certified Public Accountant, Certified QuickBooks ProAdvisor, and Certified Business Valuation Analyst. Bill began his career in public accounting in 1979. Since then he has worked at various public accounting firms throughout Connecticut. Bill received a Master of Science in Professional Accounting degree from the University of Hartford, after attending the University of Connecticut and Central Connecticut State University for his Bachelor of Arts and Master of Arts degrees. He subsequently attended Purdue University for doctoral studies in Accounting and Quantitative Methods in Business. Bill has instructed graduate and undergraduate courses in Accounting, Auditing, and other subjects at the University of Hartford, Central Connecticut State University, Hartford State Technical College, and Purdue University. He also taught GMAT and CPA Exam Review Classes at the Stanley H. Kaplan Educational Center and at Person-Wolinsky, and is certified to teach trade-related subjects at Connecticut Vocational Technical Schools. His articles on tax and accounting have been published in several professional journals throughout the country as well as on several accounting websites. William was born and raised in New Britain, Connecticut, and served on the City's Board of Finance and Taxation as well as its City Plan Commission. In addition to the blog, Accounting and Taxes Simplified, Bill writes a blog, "The Barefoot Accountant", for the Accounting Web, a Sift Media publication.
View all posts by William Brighenti →
This entry was posted in Accountants CPA Hartford, Articles and tagged 1.5M highly suspicious filers, 29 million Turbotax customers, Adam Levin, Cyber Security, Fox Business, fraudulent tax returns, Gerri Willis, identity theft, Identity Theft 911, Intuit Deputy General Counsel, Intuit Under Scrutiny, Intuit's effort to stop tax fraud under scrutiny, Intuit's efforts to stop tax fraud under scrutiny, is intuit doing enough to protect Turbotax customers, Julie Miller, March 18 2015, Mike Lyons, Multi-filers over the past 3 years, Shane McDougall, social security numbers, tax fraud, Tax Reform, tax refunds stolen, Tax Tips, Taxes, Tech Sector, total Turbotax customer growth, TurboTax, Turbotax whistleblower, who should be blamed for fraudsters using Turbotax to seal returns, Willis Report. Bookmark the permalink.