Posted on July 20, 2012 by William Brighenti
Get the Flash Player to see this content. 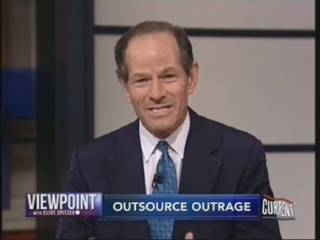 Eliot Spitzer: When did the words, made in America, become a partisan issue. Today Senate Republicans blocked the “Bring Jobs Home Act”, a bill that sounds simple because it is. The bill would eliminate tax deductions that exist for the costs a company incurs moving jobs overseas, and instead, give a tax break for companies that return jobs to America. Yet the Republicans super minority would not even allow a vote on the bill. This prompted an incredulous response from the bill’s sponsor, Senator Debbie Stabenow. 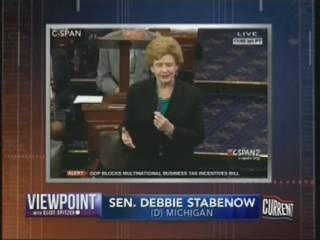 Debbie Stabenow: What in the world is going on when we can’t come together on the simple premise that Americans should not be paying for jobs shipped overseas.

And a simple explanation from Senate Majority Leader, Harry Reid.

Senator Harry Reid: It is fairly easy to see why Republicans are blocking our bill to stop outsourcing. They are obviously defending their Presidential nominee.

Joining us now to shed some light, if possible, on the Senate Republicans actions today, Senator Bernie Sanders, Independent from Vermont. Senator, as always, thank you for joining us. Explain this to me. I just don’t get it. It seems like plain vanilla and apple pie. What are the Republicans objecting to? 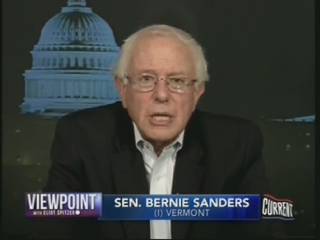 Senator Bernie Sanders: Well, Eliot, I am the wrong guy to ask on that. I have no idea. I think what most Americans perceive, Eliot, and it goes far deeper than just this legislation, or this particular tax break, is that we off hemorrhaging decent paying manufacturing jobs in this country.

In my view the real culprit here are disastrous trade policies, such as NAFTA, permanent normal trade relations with China, which have asked American workers to compete against people around the world who make pennies an hour.

But be that as it may, what today’s proposal was, was very, very modest. What it says is that right now, you can get a business tax deduction if you shut down a plant and you send your machinery to China or to Mexico or someplace else. That’s an expensive proposition. And you can deduct that from your taxable income.

And so what the bill did today says, you can’t do that. In fact, however, if you want to move from China back into the United States, we will allow you to deduct those expenses. We will encourage you to come home.

So I think it is pretty much of a no-brainer. We got three Republican votes. But once again they filibustered this important piece of legislation.

Eliot Spitzer: In my view the hidden hand of the US Chamber of Commerce behind the Republican opposition—we can get to the politics in a moment—but the Chamber of Commerce opposing this under the pretextual ridiculous absurd argument, we don’t want to make the tax code complicated. Ha, ha, ha.

Bernie Sanders: Look, Eliot, we should be very clear about this. Outsourcing is—you know, I think Harry Reid appropriately said about Mitt Romney—that has been the business model for major corporations for the last many many years. It’s no great secret. What they have understood is that if you shut down in America, you can do business in China, pay people pennies an hour, you bring your products back into the United States.

So my own view is the Democrats have not been as strong as they should be in really changing trade policy. But this particular tax proposal is really a no brainer. You should not give a tax break to somebody who shutting down in this country and aiding and abetting them to move abroad.

Eliot Spitzer: I agree with you and your premise about our trade policy. And this compounds it because we are subsidizing it in our tax code. This was just limiting the tax code. But in their imitable style the Republicans wouldn’t even let it to come to a vote because their master, the Chamber of Commerce, said if you vote against it, we’re going to include this in our annual tally. Am I right?

The Chamber of Commerce spends more money, even in the DNC, in advertising about people’s votes. And so this was a sort of Damocles hanging over the Republican party and they caved as they always do.

Bernie Sanders: Absolutely. The Chamber of Commerce spends a whole lot of money on campaigns, on lobbying. They have enormous influence in the Congress, especially on the Republicans.

Eliot Spitzer: Well, this is one in a series of issues where the Republicans don’t even permit a vote on the floor on the substantive matters, the Disclose Act, a few days ago, now this.

We really are living in a moment of tyranny of the minority in the Senate. We got to end this filibuster crisis.

Bernie Sanders: I think that’s absolutely right. Look, you know the Senate is supposed to be, as opposed to the House, the deliberative body, things are supposed to move a little bit more slowly. I can accept that. We all respect minority rights. You don’t want to shove things through without minority having the opportunity to make their case.

But there is something wrong when the minority can time after time after time stop majority will. On this issue I believe the overwhelming majority of the American people think it is absurd to give a tax break to help a company shut down and move abroad.

Eliot Spitzer: As you think, it is important that you had the two senators from Maine and also Scott Brown saying, we’re not going to toe the line with the rabid Republican Chamber of Commerce arguments here. And I think that is important and hopefully the public will appreciate that.

Fiscal clift issues: you know, a lot of chatter these days. We are approaching the clift,
no parachute, no compromise, hostages being taken. What is going on in your view and what should we do?

Bernie Sanders: Well this is, Elliot, an enormous issue and I hope, you know, you and I and the American people just have the time we need to really discuss this hugely important issue.

What happened is our friend in the White House, George W. Bush, and his Republican deficit hawk friends, went into two wars, and the great deficit hawks, Elliot, you know what? They forgot to pay for the wars.

And then they give huge tax breaks to billionaires, and then Wall Street brought about this recession, which significantly lowered the revenue coming into the Treasury. You add all of that up, we have a serious deficit crisis.

And our Republican friends are saying, well be that as it may, the solution is to cut social security, which by the way had nothing to do with the deficit, Medicare, Medicaid, education, infrastructure, etcetera, and that’s how we’re going to balance the budget. But, say the Republicans, we are not going to ask the millionaires and the billionaires who are doing phenomenally well, whose effective tax rate is the lowest in decades, to pay a nickel more in taxes. That, in a condensed way, is the issue that we are debating.

Eliot Spitzer: Senator, you made the accurate persuasive factual arguments; unfortunately none of that matters in Washington anymore or certainly not to the Republican party, not to Mitt Romney. I don’t know what to say. I would die to take that clip. Send it out to every voter and say, listen to Senator Bernie Sanders. He is the one who gets it right time and time again.

Senator Sanders, as always, thank you for your time tonight.

William Brighenti is a Certified Public Accountant, Certified QuickBooks ProAdvisor, and Certified Business Valuation Analyst. Bill began his career in public accounting in 1979. Since then he has worked at various public accounting firms throughout Connecticut. Bill received a Master of Science in Professional Accounting degree from the University of Hartford, after attending the University of Connecticut and Central Connecticut State University for his Bachelor of Arts and Master of Arts degrees. He subsequently attended Purdue University for doctoral studies in Accounting and Quantitative Methods in Business. Bill has instructed graduate and undergraduate courses in Accounting, Auditing, and other subjects at the University of Hartford, Central Connecticut State University, Hartford State Technical College, and Purdue University. He also taught GMAT and CPA Exam Review Classes at the Stanley H. Kaplan Educational Center and at Person-Wolinsky, and is certified to teach trade-related subjects at Connecticut Vocational Technical Schools. His articles on tax and accounting have been published in several professional journals throughout the country as well as on several accounting websites. William was born and raised in New Britain, Connecticut, and served on the City's Board of Finance and Taxation as well as its City Plan Commission. In addition to the blog, Accounting and Taxes Simplified, Bill writes a blog, "The Barefoot Accountant", for the Accounting Web, a Sift Media publication.
View all posts by William Brighenti →
This entry was posted in Accountants CPA Hartford, Articles and tagged 20% tax credit for insourcing jobs, avoiding the cliff, Bring Jobs Home Act, Chamber of Commerce, Eliot Spitzer, fili-buster, Multinational Corporations tax breaks to ship jobs to China, national annual deficit, national debt, outsource outrage, President George W. Bush, Republican deficit hawks, Republicans vote down measure to end tax breaks for big oil companies, Senate Republicans defeat the Bring Jobs Home Act so Multinational Corporations can continue to get tax breaks for outsourcing jobs overseas, Senate Republicans prevent passage of the Bring Jobs Home Act to end tax breaks for corporations for outsourcing jobs overseas, Senator Bernie Sanders, Senator Debbie Stabenow, Senator Harry Reid, tax breaks for rich, tax deductions for costs to transfer manufacturing facilities to China, transcript, unfair trade agreements, US Chamber of Commerce, video, Viewpoint Current TV July 13 2012. Bookmark the permalink.