Is Rocky Anderson the spoiler or the moral alternative in the 2012 Presidential election?

Posted on July 16, 2012 by William Brighenti
Get the Flash Player to see this content. 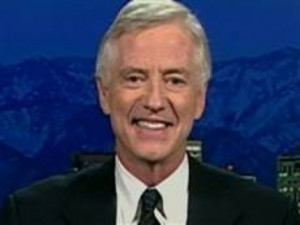 I am Rocky Anderson and I’m the Justice Party’s candidate for President of the United States. I’ve also been nominated by the Independent Party in New Mexico and the Progressive Party in Oregon, and I’m seeking the nomination of the Peace and Freedom Party in California.

And I thought long and hard about this. And, in fact, my concern about the so-called spoiler effect kept me from getting into this race for a period of time until after thinking very intensely about this, I concluded that we cannot be driven by fear of being a spoiler because if we did, in every single race, we’d end up voting for one of the two parties in this sick, corrupt, political duopoly in this country, the Republican and the Democratic Parties, who have brought us to the point where we are.

And we have got to break out of that. Regardless of whether it means we are going to win or lose a particular election, we have to come together and build a long term sustained movement, and the way to get that started is for as many people as we can possibly get behind this race to vote for a very different way.

There are three basic responses to this so-called spoiler argument. First, we are stuck in a very corrupt game in which we simply move around the players, a Democrat here, a Republican there, every election. It doesn’t matter in this context which of the two parties wins. We still end up with a corrupt system in which the public interest is betrayed by elected officials who have sold out to the highest bidders.

The rules have been made by the two dominant parties and they thrive from those rules. If we are ever going to break out of that perverse game and create a new paradigm where concentrated wealth no longer calls the shots in Washington, we need to vote for a real alternative. We may not win this election but each of us can send the message that we will not stand for this disease plutocracy anymore.

Not to make light of any of this, but I saw cartoon recently that makes the point powerfully. That cartoons says, choosing among Republican or Democratic candidates for President is like choosing between a window seat or an aisle seat on a plane crash. Our job is to do all we can to save our nation from that plane crash.

The second argument against the so-called spoiler argument: we need to, each of us, draw our own moral and political lines in the sand and determine where that point is beyond which we will not go. I have drawn my line. I determined that I cannot support someone who will engage in ramped-up wars of aggression; who covers for Wall Street and refuses to hold accountable those responsible for the massive financial fraud leading to the economic disaster faced by millions of people in this country; who ignores the responsibility to provide leadership on the climate crisis; who ignores due process and targets US citizens for assassination; and who gives the orders for drone killings, where we know that hundreds of innocent men, women, and children have been killed in the process in nations where Congress has not authorized acts of war in violation of the War Power clause of the Constitution; and who has signed into law the power of government to round people up and indefinitely detain them without trial, without charges, without right of habeas corpus, and even without the right of legal assistance.

When I am eighty years old, I want to look back and say I did everything I could to oppose the atrocities, including not supporting even the lesser evil among the two possible candidates.

The third point: President Obama might be the lesser of two evils, but he is indeed the more effective of the two evils. If George Bush or Mitt Romney were doing the things that President Obama has done, half or perhaps more of this country would be standing up in opposition, including Democrats in Congress. Imagine if George Bush, Dick Cheney and Donald Rumsfeld were sitting around in the Oval Office deciding who would be killed by drones, knowing that hundreds of innocent civilians will also be killed in the process, Democrats would be out there demonstrating. In Congress they would be holding hearings and blasting the Republicans for their war crimes and human rights abuses.

However since President Obama has a “D” on his jersey, his teammates, other Democrats, simply remain complacent and fail to voice any opposition, becoming complicit in our nation’s war mongering and march towards totalitarianism. The absence of opposition by both major political parties in the face of the many abuses by the Obama administration is perhaps the most frightening facet of our nation’s present circumstances.

Please join with us in saying, “no more”. Make your vote count along with those of many others to signal your insistence that we eliminate the corrupting influence of money in government and that we restore the rule of law, the system of checks and balances, and fundamental constitutional values.

William Brighenti is a Certified Public Accountant, Certified QuickBooks ProAdvisor, and Certified Business Valuation Analyst. Bill began his career in public accounting in 1979. Since then he has worked at various public accounting firms throughout Connecticut. Bill received a Master of Science in Professional Accounting degree from the University of Hartford, after attending the University of Connecticut and Central Connecticut State University for his Bachelor of Arts and Master of Arts degrees. He subsequently attended Purdue University for doctoral studies in Accounting and Quantitative Methods in Business. Bill has instructed graduate and undergraduate courses in Accounting, Auditing, and other subjects at the University of Hartford, Central Connecticut State University, Hartford State Technical College, and Purdue University. He also taught GMAT and CPA Exam Review Classes at the Stanley H. Kaplan Educational Center and at Person-Wolinsky, and is certified to teach trade-related subjects at Connecticut Vocational Technical Schools. His articles on tax and accounting have been published in several professional journals throughout the country as well as on several accounting websites. William was born and raised in New Britain, Connecticut, and served on the City's Board of Finance and Taxation as well as its City Plan Commission. In addition to the blog, Accounting and Taxes Simplified, Bill writes a blog, "The Barefoot Accountant", for the Accounting Web, a Sift Media publication.
View all posts by William Brighenti →
This entry was posted in Accountants CPA Hartford, Articles and tagged Is Rocky Anderson the spoiler or the moral alternative in the 2012 Presidential election?, Justice Party, lesser of two evils, Mitt romney, President Barack Obama, President Obama is the more effective of two evils, Presidential election, Rocky Anderson, spoiler or moral alternative, three reasons why Rocky Anderson is not a spoiler. Bookmark the permalink.

One Response to Is Rocky Anderson the spoiler or the moral alternative in the 2012 Presidential election?