Posted on July 15, 2012 by William Brighenti
Get the Flash Player to see this content. 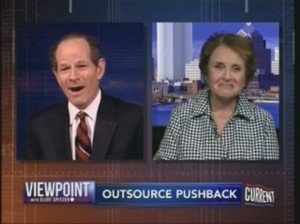 Eliot Spitzer: I want to come back to the outsourcing issue. Mitt Romney obviously being, in my view, properly attacked for the outsourcing that Bain did, how do we actually stopped that. To some extent, are not these not laws of economics? Are these choices that we can actually force companies not to make, not to send jobs overseas?

Congresswoman Louise Slaughter: Eliot, let’s talk about trade bills for just a second because I have been against those since I got into Congress including the ones that we passed this term. But I have never seen any kind of trade agreement the United States made with another country that advantaged in any way the American manufacturers. In many cases I think they were pretty much sent overseas. 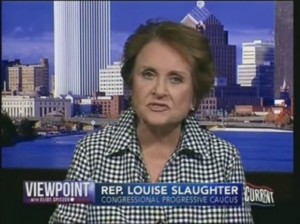 And manufacturers, you know, we have never been able to deal with a law that allows Congress to pay people to outsource. That is an annoyance beyond belief, as many things in Washington are today.

But I found a trade bill as well that will finally advantage manufacturers in America by saying that we can change the conditions of a trade bill. It wasn’t tariffs that really bothered so much as the unseen barriers: for example, with cars, the steering wheel wasn’t big enough, this light doesn’t look right, I don’t like that bumper.

Eliot Spitzer: Louise, I could not agree with you more and I think you put your finger on the very issue that we need to talk about, which is that—and I hate to admit it, this is unfortunate—it has been a bipartisan error. President Clinton signed a lot of the trade bills.

Louise Slaughter: All of them. Yes.

Eliot Spitzer: That’s right. There have been two pieces, two pillars, of our economic strategy that have been fundamentally wrong: one was deregulation of Wall Street; the other was trade bills that were simply oblivious, as you point out, to our manufacturing base. Can we get the President to change on this?

Louise Slaughter: I don’t know. I hope so. I have certainly been trying because of this bill that I got. But this goes all the way back. NAFTA, of course, as we know, has done absolutely nothing for us. And what I watched towns like mine and cities around us be boarded up where people used to work. It was a stupid thing for us to do.

We were in the top manufacturing in the world, we were extraordinarily generous, and we need to be because we had a lot of things going for us, but what we did was give away our seed corn. Nobody does that but we did it.

Eliot Spitzer: You are from the Rochester Buffalo portion of upstate New York, which is part of what people used to refer to as the rust belt. It used to be the industrial manufacturing core of America. You understand exactly what has happened to hollow out our economy, and I sure hope that you will continue to hammer on this.

Louise Slaughter: I sure will. I am so involved in this that I eat and sleep this Bill so that we can try once to advantage American manufacturers.

William Brighenti is a Certified Public Accountant, Certified QuickBooks ProAdvisor, and Certified Business Valuation Analyst. Bill began his career in public accounting in 1979. Since then he has worked at various public accounting firms throughout Connecticut. Bill received a Master of Science in Professional Accounting degree from the University of Hartford, after attending the University of Connecticut and Central Connecticut State University for his Bachelor of Arts and Master of Arts degrees. He subsequently attended Purdue University for doctoral studies in Accounting and Quantitative Methods in Business. Bill has instructed graduate and undergraduate courses in Accounting, Auditing, and other subjects at the University of Hartford, Central Connecticut State University, Hartford State Technical College, and Purdue University. He also taught GMAT and CPA Exam Review Classes at the Stanley H. Kaplan Educational Center and at Person-Wolinsky, and is certified to teach trade-related subjects at Connecticut Vocational Technical Schools. His articles on tax and accounting have been published in several professional journals throughout the country as well as on several accounting websites. William was born and raised in New Britain, Connecticut, and served on the City's Board of Finance and Taxation as well as its City Plan Commission. In addition to the blog, Accounting and Taxes Simplified, Bill writes a blog, "The Barefoot Accountant", for the Accounting Web, a Sift Media publication.
View all posts by William Brighenti →
This entry was posted in Accountants CPA Hartford, Articles and tagged advantage American manufacturers, Bill Clinton signed a lot of trade agreements, Congresswoman Louise Slaughter, Democrats, Eliot Spitzer, NAFTA, outsource pushback, outsourcing American jobs, Republicans, Republicans and conservative Democrats and Romney and Obama continue to support the outsourcing of jobs with trade agreements unfair to American manufacturers, trade barriers, unfair trade agreements, unfair trade agreements signed under Obama's Administration, Viewpoint Current TV July 13 2012. Bookmark the permalink.