So who is right? Republicans are always saying that taxes are too high and they are killing job creators. President Obama is saying, on the other hand, that, no, it is the middle class that creates demand and stimulates the economy, in turn creating jobs. 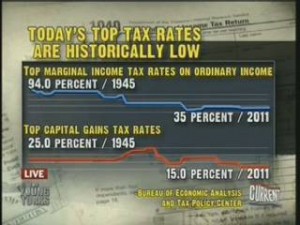 The highest marginal tax rate in 1945 was 94%. Now it is at 35%. Similarly, the capital gains tax rate was at 25%; now it is at 15%. So the present tax rates are not at historic highs, as Republicans would lead you to believe, but rather at historic lows.

The Republicans have been saying for decades—and this has been unchallenged by the media and even by most Democrats—that if taxes are lowered, it grows the economy and creates jobs.  Examining a graph of the different top marginal tax rates from 1950 to the present time in relation to average real GDP growth, one can see that when those rates were at their lowest, real GDP growth were similarly at their lowest levels. 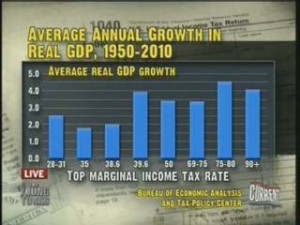 In fact, at the current top marginal tax rate of 35%, real GDP growth has been at its lowest level in that time period.

However, when the top marginal tax rates were at their highest rates of 75% to 80%, the United States experienced its highest growth rates in terms of real GDP growth.  Although there are other factors involved in the level of GDP growth, the Republican contention that higher taxes would destroy our nation’s economy is not true when examining historical facts.

In fact, even when the tax rates were as high as 90%, the economy still boomed.  It was doing much better than when the rates were capped at 35%.  Now this graph shows the historical relation of tax rates to GDP, but how about their relation to jobs and employment. 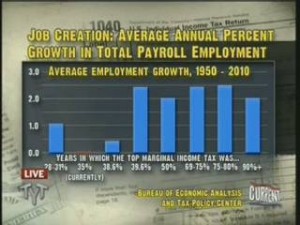 The United States has capped the highest marginal tax rate at 35% now for eleven years and it continues to lose jobs.  Tax cuts do not create jobs.  Often times they cost jobs.

When taxes are raised on the rich, history shows that our country does not lose jobs.  Quite the contrary, the nation experienced the highest amount of growth and the greatest increase in employment when the highest marginal tax rates were at their highest levels.

Consequently, the rich are not job creators.  And taxes on the rich does not have a negative impact on economic growth nor on the creation of jobs.

William Brighenti is a Certified Public Accountant, Certified QuickBooks ProAdvisor, and Certified Business Valuation Analyst. Bill began his career in public accounting in 1979. Since then he has worked at various public accounting firms throughout Connecticut. Bill received a Master of Science in Professional Accounting degree from the University of Hartford, after attending the University of Connecticut and Central Connecticut State University for his Bachelor of Arts and Master of Arts degrees. He subsequently attended Purdue University for doctoral studies in Accounting and Quantitative Methods in Business. Bill has instructed graduate and undergraduate courses in Accounting, Auditing, and other subjects at the University of Hartford, Central Connecticut State University, Hartford State Technical College, and Purdue University. He also taught GMAT and CPA Exam Review Classes at the Stanley H. Kaplan Educational Center and at Person-Wolinsky, and is certified to teach trade-related subjects at Connecticut Vocational Technical Schools. His articles on tax and accounting have been published in several professional journals throughout the country as well as on several accounting websites. William was born and raised in New Britain, Connecticut, and served on the City's Board of Finance and Taxation as well as its City Plan Commission. In addition to the blog, Accounting and Taxes Simplified, Bill writes a blog, "The Barefoot Accountant", for the Accounting Web, a Sift Media publication.
View all posts by William Brighenti →
This entry was posted in Accountants CPA Hartford, Articles and tagged Cenk Uygur, Current TV, cutting highest marginal tax rates does not create jobs, Employment growth rates, Gross Domestic Product, Highest marginal tax rates, history of employment growth rates in the United States, history of highest marginal tax rates in the United States, history of real GDP growth rates in the United States, job creation, July 10 2012, Mitt romney, President Barack Obama, raising taxes on the rich correlates with increases in GDP and job creation and a booming economy, real GDP growth rates, Republican rich myth, Republicans, The Young Turks, transcript, video. Bookmark the permalink.

One Response to Cutting taxes creates jobs: wrong! History shows the exact opposite!