CEO pay is outrageous: 380 times more than that of average worker. 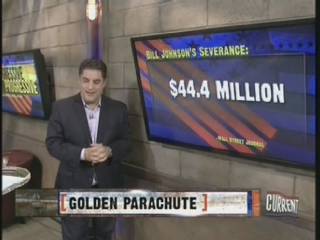 Cenk Uygur of The Young Turks on Current TV on July 9, 2012, as the Aggressive Progressive discussing the Golden Parachutes for CEOs.

“Duke Energy and Progress Energy merged. It was not good for Bill Johnson, who was the former CEO of Progress Energy because he was fired after a day, or decided to step down, as they say.

Well, don’t feel too bad for Bill Johnson because he got $44.4 million for that one day’s work. 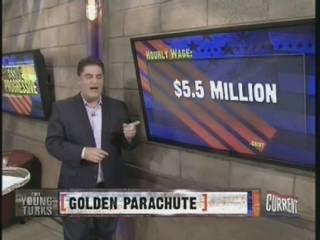 Do you know how much that comes out to? If he worked an eight hour day, which I am not convinced of, it would come out to $5.5 million per hour.

Now CEO pay is outrageous: that’s a whole new level. In fact, when you look at CEO pay, do you know how much it is larger than that of the average worker? 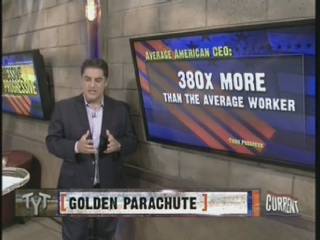 CEOs make 380 times more than you

Now that is not how it always was. It used to be forty (40) times more than that of the average worker. Everybody knows that the CEO is going to get paid more. This is an outrageous amount more.

And in fact in the last thirty (3) years, did you know that the CEO’s pay has gone up one hundred and twenty-seven (127) times faster than your pay?

So when they say it is trickle down, do not worry, eventually it will get to you, no, not really. It does not get to you at all. It goes one hundred and twenty-seven (127) times more to the CEO. 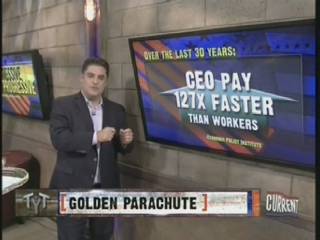 They have rigged the rules. They get to pick their own boards. The shareholders cannot even vote. They are the owners of the company.

And look at this: do you know how much it takes for a CEO to buy a gallon of milk? 0.01 seconds. For the guy that is making minimum wage, it takes a half of an hour of work. 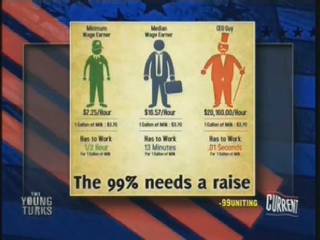 We got to fix this system.

William Brighenti is a Certified Public Accountant, Certified QuickBooks ProAdvisor, and Certified Business Valuation Analyst. Bill began his career in public accounting in 1979. Since then he has worked at various public accounting firms throughout Connecticut. Bill received a Master of Science in Professional Accounting degree from the University of Hartford, after attending the University of Connecticut and Central Connecticut State University for his Bachelor of Arts and Master of Arts degrees. He subsequently attended Purdue University for doctoral studies in Accounting and Quantitative Methods in Business. Bill has instructed graduate and undergraduate courses in Accounting, Auditing, and other subjects at the University of Hartford, Central Connecticut State University, Hartford State Technical College, and Purdue University. He also taught GMAT and CPA Exam Review Classes at the Stanley H. Kaplan Educational Center and at Person-Wolinsky, and is certified to teach trade-related subjects at Connecticut Vocational Technical Schools. His articles on tax and accounting have been published in several professional journals throughout the country as well as on several accounting websites. William was born and raised in New Britain, Connecticut, and served on the City's Board of Finance and Taxation as well as its City Plan Commission. In addition to the blog, Accounting and Taxes Simplified, Bill writes a blog, "The Barefoot Accountant", for the Accounting Web, a Sift Media publication.
View all posts by William Brighenti →
This entry was posted in Accountants CPA Hartford, Articles and tagged $44.7 million pay, Aggressive progressive, Bill Johnson CEO Progress Energy, Cenk Uygur, CEO pay 380 times more than average worker, CEO pay outrageous, Current TV, Duke Energy, July 9 2012, The Young Turks. Bookmark the permalink.