Less than 100 Americans determine U.S. election results: say bye-bye to our democracy and hello to the plutocracy

Posted on June 30, 2012 by William Brighenti
Get the Flash Player to see this content. 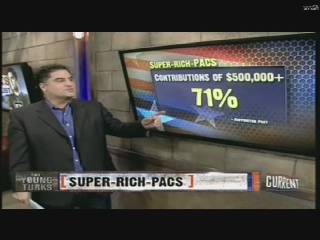 Cenk Uygur: If you think I am outraged about that, wait till you get me talking about campaign finance reform. The real problem in politics is all the money that is pouring in. In fact, there is a new report out about the Super PACs. As of May 71% of the money coming in is from donors above $500,000. That is not their income; that is not their wealth. That is the amount of money that they have given.

Do you think that they give $500,000 out of the goodness of their heart? No, they give that money so they could buy them, so that if you are Sheldon Adelson, giving $71 million, and you might be brought up on charges on the Corrupt Foreign Practices Act, and you give a little bit of money, my guess is those charges are not coming if his guy wins. Our system has become legalized and obvious bribery.

And they said in a five to four decision, where Chief Justice John Roberts was with the conservatives, with the corporations, said even on the state level, corporations can buy any damn politician they like. And they said, there is not even an appearance of corruption.

Are you kidding me? 100 guys have bought the election, and there is no appearance of corruption? On which planet. As you can tell, I am a little bit worked up about it, as I have said.

Unfortunately, in a lot of ways, we have lost our democracy. Those guys are the ones that get to determine who is going to win and who is not going to win, and it is sickening.

William Brighenti is a Certified Public Accountant, Certified QuickBooks ProAdvisor, and Certified Business Valuation Analyst. Bill began his career in public accounting in 1979. Since then he has worked at various public accounting firms throughout Connecticut. Bill received a Master of Science in Professional Accounting degree from the University of Hartford, after attending the University of Connecticut and Central Connecticut State University for his Bachelor of Arts and Master of Arts degrees. He subsequently attended Purdue University for doctoral studies in Accounting and Quantitative Methods in Business. Bill has instructed graduate and undergraduate courses in Accounting, Auditing, and other subjects at the University of Hartford, Central Connecticut State University, Hartford State Technical College, and Purdue University. He also taught GMAT and CPA Exam Review Classes at the Stanley H. Kaplan Educational Center and at Person-Wolinsky, and is certified to teach trade-related subjects at Connecticut Vocational Technical Schools. His articles on tax and accounting have been published in several professional journals throughout the country as well as on several accounting websites. William was born and raised in New Britain, Connecticut, and served on the City's Board of Finance and Taxation as well as its City Plan Commission. In addition to the blog, Accounting and Taxes Simplified, Bill writes a blog, "The Barefoot Accountant", for the Accounting Web, a Sift Media publication.
View all posts by William Brighenti →
This entry was posted in Accountants CPA Hartford, Articles and tagged $71 million, 100 people buy the elections, 71% of Super Pac donations from contributions of more than $500000, Arizona, Cenk Uygur, Chief Justice John Roberts, Congress, Corporations buy politicians, corruption, Current TV, democracy, Foreign Corrupt Practices Act, June 29 2012, Less than 100 Americans determine election results: say bye-bye to our democracy and hello to the plutocracy, Montana Supreme Court ruling, plutocracy, President Barack Obama, rich buying politicians, Sheldon Adelson, state's rights, Super Pacs, Supreme Court rules no appearance of corruption, The Young Turks, transcript, two-thirds of contributions to Super PACs from less than 100 people, United States, video, Washington DC. Bookmark the permalink.