Posted on June 26, 2012 by William Brighenti
Get the Flash Player to see this content.

There was a very important case in front of the Supreme Court today, and Arizona’s immigration law was struck down partially, of course. Now the part about how it’s a crime for illegal immigrants to seek work and not carry immigration papers was struck down because it has a conflict with federal legislation. But the part where they talk about papers, where they basically pullover Latinos and ask them if they are citizens or not is actually still in the bill. 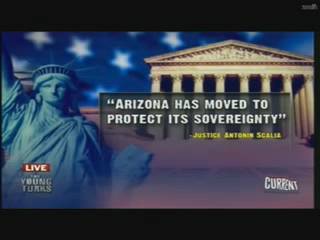 Now it is an important case but what I think is a much more important case is the Montana case that involves Citizens United. But before I go there, I want to actually give you a couple of quotes from Anthony Scalia’s opinion on the Arizona immigration case. And we will tie it in altogether in a second with the Montana case. He said, “Arizona has moved to protect its sovereignty.” Now this is very important because when it comes to the immigration issue, conservative Anthony Scalia is saying sovereignty, state’s rights. 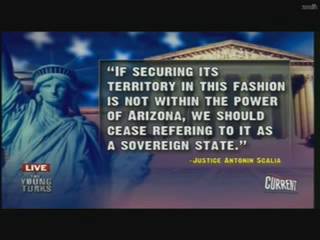 He continues to say, “If securing its territory in this fashion is not within the power of Arizona, we should cease referring to it as a sovereign state.” My God, this man cares about state’s rights.

Well, so when it came to the Montana issue, whether corporations can buy our politicians, Montana is very clear. It has had a law on the books for literally 100 years. In 1912 they 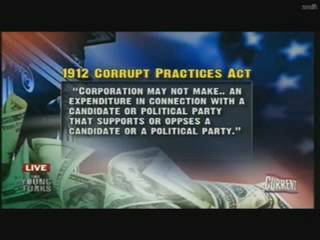 passed this law that said, “Corporations may not make an expenditure in connection with a candidate or a political party that supports or opposes a candidate or political party.” How clear can they be? And the Montana Supreme Court said, that is the law of our land; it’s passed by the voters; we think it leads to corruption if corporations give money; so states’s rights: let’s make sure that corporations cannot buy politicians at least within the state of Montana.

So Scalia was part of a 5 to 4 decision to say, no, Montana Supreme Court: you don’t get to set the laws in your own state. You will bow your heads and do exactly as the corporations tell you to do. 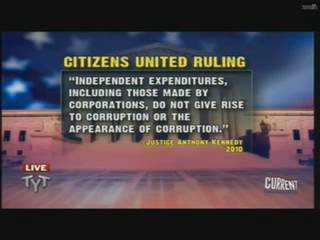 Now remember, the decision that they are basing this on is Citizens United, which Justice Kennedy explained in his 2010 decision: “Independent expenditures including those made by corporations do not give rise to corruption or their appearance of corruption.”

I love that because it is so comical. Really? So when a corporation gives $100,000 or $1 million or $10 million to a politician, and says, I like to have this law passed, that does not lead to maybe the appearance of corruption, nothing at all?! And here are the five corporatists on the Supreme Court, saying ah huh, yep, uh huh, I don’t see any corruption. Do you see any corruption, Scalia? I don’t see it. Do you see any state’s rights? I don’t need any state’s rights. Screw state’s rights. Exxon Mobil, Haliburton, what would you like? I’m just going to give it to you. 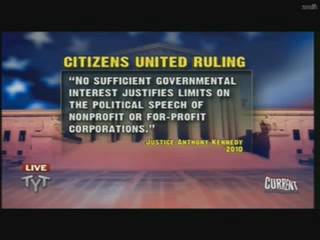 And Kennedy went on to say also in that Citizens United decision: “No sufficient governmental interest justifies limits on the political speech of nonprofit or for-profit corporations.”

Now he is saying that there could not possibly be an appearance of corruption so there is no government interest at all to making sure our politicians are not bought. Sheldon Adelson is giving $71 million to buy his politicians to do whatever he damn well pleases. If Sheldon Adelson says, you do this, do you think Mitt Romney is going to say to Sheldon Adelson, oh, I’m sorry, perhaps we should not look into the foreign corrupt practices act, or anything else that you want. No, he is going to do whatever Sheldon tells him to do.

In the Montana case, the majority said they didn’t even want to hear the case. Who cares. I don’t want to hear arguments about it. I just want to rule in favor of corporations. 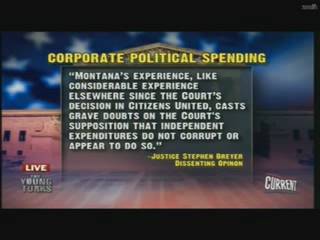 Well, the dissent, four of them, including the dissenting opinion of Stephen Breyer, wrote this about the Montana case regarding corporate political spending: “Montana’s experience, like considerable experience elsewhere since the Court’s decision in Citizens United, casts grave doubts on the Court’s supposition that independent expenditures do not corrupt or appear to do so.” 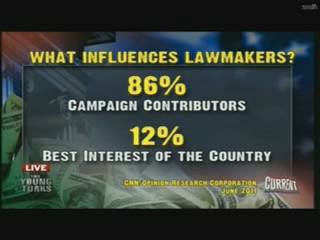 Well, it turns out so is our Supreme Court. This decision they made in the Montana case where they didn’t even hear really the arguments in the case will be definitely the most momentous decision made in this term, let alone today. I know there is a lot of talk about healthcare and about immigration, but this affects everything else. They buy our politicians with this corporate money and we lose on everything.

They don’t give a damn what we think. It’s not even a democracy any more. So my opinions on this are clear.

And what we have with this Court right now is the most right wing and most pro-corporatist Supreme Court really in the history of the United States. And I think even we went back to the Gilded Age at the end of the 19th and the beginning of the 20th century, the Supreme Court even at that time was not as absolutely consistent in its support of corporatist and money interests in the United States as this Court is. And I think that is a truly frightening thing to consider in regard to the effect of money on politics in this country.

William Brighenti is a Certified Public Accountant, Certified QuickBooks ProAdvisor, and Certified Business Valuation Analyst. Bill began his career in public accounting in 1979. Since then he has worked at various public accounting firms throughout Connecticut. Bill received a Master of Science in Professional Accounting degree from the University of Hartford, after attending the University of Connecticut and Central Connecticut State University for his Bachelor of Arts and Master of Arts degrees. He subsequently attended Purdue University for doctoral studies in Accounting and Quantitative Methods in Business. Bill has instructed graduate and undergraduate courses in Accounting, Auditing, and other subjects at the University of Hartford, Central Connecticut State University, Hartford State Technical College, and Purdue University. He also taught GMAT and CPA Exam Review Classes at the Stanley H. Kaplan Educational Center and at Person-Wolinsky, and is certified to teach trade-related subjects at Connecticut Vocational Technical Schools. His articles on tax and accounting have been published in several professional journals throughout the country as well as on several accounting websites. William was born and raised in New Britain, Connecticut, and served on the City's Board of Finance and Taxation as well as its City Plan Commission. In addition to the blog, Accounting and Taxes Simplified, Bill writes a blog, "The Barefoot Accountant", for the Accounting Web, a Sift Media publication.
View all posts by William Brighenti →
This entry was posted in Accountants CPA Hartford, Articles and tagged 1912 Montana law against corporate political contributions, Anthony Scalia, Cenk Uygur, Citizens United, Current TV, June 25 2012, Justice Stephen Breyer, Montana Supreme Court ruling against corporate political contributions, political spending ruling, state sovereignty, The Young Turks, transcript, United States Supreme Court, video. Bookmark the permalink.