The Rich and the Rest of Us: a Poverty Manifesto. Video and transcript.

Posted on April 27, 2012 by William Brighenti
Get the Flash Player to see this content. 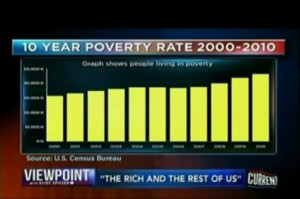 Cenk Uygur: You might remember that between the years 2000 and 2010 we did massive tax cuts for the rich. How did that turn out for us? It turns out not so well. In fact, in that decade the poverty rate increased dramatically. It’s now at 15.1%. 46 million people live below the poverty line in America now. I thought that we were going to get trickle down. What happened? Something’s trickling, it ain’t wealth, that’s for sure, right?

And when we did recover from the gigantic recession that those tax cuts caused, where did the benefits go? Unfortunately, they didn’t go to us either. They went to the top 1%.

I know two guys that are sick and tired of that. And they are Tavis Smiley and Dr. Cornel West. They wrote the book, “The Rich and the Rest of Us: a Poverty Manifesto”. And they join us right now.

So let me start with Dr. West here. What went wrong? Why under a Democratic President, for example, did we not get a recovery that helped all of us but seemed to help mainly the top 1%?

Dr. Cornel West: My dear brother Cenk, what we have are structural tendencies within the system itself so that it is designed in such a way that the wealth goes up, wages stagnate and decline, poor people rendered invisible, and it’s true for both parties. The Democrats are better than the Republicans in terms of making gestures toward poor and working people but in terms of the actual suffering we need to look at that America from the vantage point of those who are suffering, poor people and working people.

Cenk Uygur: Tavis, I know that you two have taken a lot of heat for criticizing the Obama administration. Why take that on when you know you are going to get the heat and what got you guys so worked up that you were willing to go to that step?

Tavis Smiley: Thanks for having us on. It’s a great question. I prefer to say holding the President accountable as opposed to criticizing him. I think that our job in the media, my job and your job that you do so well every day on this network and on your program, The Young Turks, is about holding people accountable and not allowing them to push agendas that are antithetical to the rest of us when they coddle to those who happen to be wealthy in this country.

So I believe that you try to find the courage and conviction and commitment to raise your voice about the things that you care about. And that issue, for Dr. West and me, is poverty. We don’t see poverty as just a political, as just a social, or cultural or economic issue, it is all of those things, Cenk, but it is also the moral and the spiritual issue of our time.

And what we argue quickly in this text is that poverty threatens our very democracy. We argue that poverty is a matter of national security. We argue that there is no priority being given to the poor in this country. There seems to be a bipartisan consensus in Washington that the poor don’t matter. We cannot abide another race for the White House where the issue of poverty and poor people are not placed high on the American agenda.

Cenk Uygur: So what are you guys, crazy? We’ve got wars to fight. We cannot be worried about our own poor people. Seriously I love that you guys are bringing out this issue because apparently no one else in Washington gives a damn because they don’t seem to be talking about it at all.

So I hear you on that. But I think a lot of people at home are thinking, wait a minute now. We know the Republicans are not with us, and if the Democrats have not fixed it, then what hope do we have? How do we go about fixing this system?

Brother Martin used to say, the bombs dropped on Vietnam landed on ghettos, landed on poor whites in Appalachia, landed on reservations, landed on our brown brothers and sisters in Bario. There’s a connection between the drones on the one hand and the zones of poverty in the nation. We need to dot the “i” and see the intimate link between the war priority, the money in the military, but not enough money when it comes to education. Money for jails and prisons but not enough money when it comes to housing.

Cenk Uygur: So how do we get the politicians to actually listen to the voters? Because on so many issues the voters are clear. Over 80% say, will you, for the love of God, tax the rich already. They are not getting taxed enough. Mitt Romney paid a comically low tax rate, nearly 13%, 14% tax rate when he’s got a quarter of a billion dollars, but they won’t do it. So how do we get them to do it?

Tavis Smiley: Poverty can be so debilitating that people end up being rendered invisible and surrendering their agency. We do have agency, we do have voices, that need to be lifted.  The Occupy Wall Street movement reminds each and every one of us that we can make a difference. We can push politicians to pay attention.

So we lay out in this book—not that we have a monopoly on the truth, not that we have all the great ideas—but we do lay out twelve poverty reducing, poverty eradicating, ideas that we got to talk about during this campaign.

Now here’s the bottom line, and I said this before. In the last race for the White House, Cenk, you recall that in three Presidential debates between McCain and Obama the word poor or poverty did not come up one time. Obama didn’t raise it. McCain didn’t raise it. The moderators didn’t ask about it.

Fast forward four years, one out of two Americans is either in or near poverty, half of America is either in poverty or low income, you can’t sustain a democracy that way, as I said earlier. The time is now for us to have a conversation about poverty.

Cenk Uygur: Your point on LBJ is so well taken. I was at his library and he said not only Martin Luther King pushed him but he was worried about Malcolm X. And so that happened, too.

We have 30 seconds left. Dr. West, I got to ask you, when President Obama does the populist speeches now on the campaign trail, do you believe him?

Cenk Uygur: Alright. The book is “The Rich and the Rest of Us.” And I couldn’t agree more. Tavis Smiley and Cornel West. You guys have been great. Thank you so much.

William Brighenti is a Certified Public Accountant, Certified QuickBooks ProAdvisor, and Certified Business Valuation Analyst. Bill began his career in public accounting in 1979. Since then he has worked at various public accounting firms throughout Connecticut. Bill received a Master of Science in Professional Accounting degree from the University of Hartford, after attending the University of Connecticut and Central Connecticut State University for his Bachelor of Arts and Master of Arts degrees. He subsequently attended Purdue University for doctoral studies in Accounting and Quantitative Methods in Business. Bill has instructed graduate and undergraduate courses in Accounting, Auditing, and other subjects at the University of Hartford, Central Connecticut State University, Hartford State Technical College, and Purdue University. He also taught GMAT and CPA Exam Review Classes at the Stanley H. Kaplan Educational Center and at Person-Wolinsky, and is certified to teach trade-related subjects at Connecticut Vocational Technical Schools. His articles on tax and accounting have been published in several professional journals throughout the country as well as on several accounting websites. William was born and raised in New Britain, Connecticut, and served on the City's Board of Finance and Taxation as well as its City Plan Commission. In addition to the blog, Accounting and Taxes Simplified, Bill writes a blog, "The Barefoot Accountant", for the Accounting Web, a Sift Media publication.
View all posts by William Brighenti →
This entry was posted in Accountants CPA Hartford, Articles and tagged Cenk Uygur Viewpoint April 26 2012, Dr. Cornel West, interview on current tv, Martin Luther King, Poverty, President Barack Obama, Tavis Smiley, The Rich and the Rest of Us: A Poverty Manifesto, transcript, video, video and transcript. Bookmark the permalink.

2 Responses to The Rich and the Rest of Us: a Poverty Manifesto. Video and transcript.