Posted on April 21, 2012 by William Brighenti
Get the Flash Player to see this content. 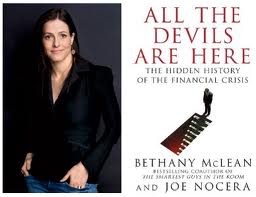 Eliot Spitzer:  We’ve always known that Wall Street is the home of the Dark Arts.  One super trader is even being called Voldemort.  But unlike that villain, he can be named.  Bruno Iksil is the JPMorgan Chase trader, who single handedly moved the derivatives market last week with huge bets on corporate bonds.  The panic this created revealed the weakness of the Harry Potter born to vanquish him, the Volcker Rule.

Joining me now is Vanity Fair’s contributing editor, Bethany McLean.  Bethany, thank you for being here.  You understand all this stuff.  What was going on in the markets and haven’t we taken care of this problem?

Bethany McLean:  Well, I think it shows you that where there is a will, there is a way.  And unfortunately Wall Street has a will to subvert regulators, rather Congress’ best intentions with the Volcker Rule.  And seriously this proves that what we need is some sort of radical reform, not these half attempts to restrain behavior.

Eliot Spitzer:  Okay, now let me pick up on a couple of things that you said.   It appears that what happened is that you have this one trader over in London placing these huge bets with JPMorgan’s proprietary money, which means that their own money was at risk with these huge bets.  Is that kind of what happened?

Bethany McLean:  That is, but the justification from JPMorgan’s point of view is what the trader was doing he’s operating out of JPMorgan’s treasury and what he’s doing is simply hedging the bank’s other positions.  So he is not making proprietary bets.  He’s hedging and there is an exemption for that under the Volcker Rule.  It is not actually even clear to me that any kind of treasury operations would be included under the Volcker Rule anyway.

Eliot Spitzer:  Okay, let me interrupt.  You are drawing distinctions here that only a securities lawyer can even begin to appreciate and understand.  It seems to me that the whole point of passing these laws was to keep these banks from doing something it was going to put a lot of their money at risk because when they lose, we end up bailing them out.  So have we missed the boat here entirely?

Bethany McLean:  I think the only way to do this, I think banks have found an exemption or a way around the Volcker Rule.  They will continue to do so.  It’s the history of Wall Street.

Regulators put rules in effect; the big banks find a way around it; other banks say, “Oh, I’m losing my advantage.  Look at what this bank is doing.”  They copy it, and risk builds up in a dangerous fashion.

I don’t understand, if we don’t go back to the days of the Glass-Steagall rule, which separated all investment banking activities from commercial banking activities, we could go back to something called Section 20, where they were required basically to be in separate companies, and I think the world would be a safer place.

Eliot Spitzer:  Right.  Look, I certainly agree with you.  I think anybody—well, not anybody, I can’t generalize that far— but certainly a lot of people who have looked at this, and you wrote a spectacular book about it, anybody who’s really looked at the 2008 crisis agrees it is this repeal of Glass-Steagall, the merger of investment in commercial banking, the exponential increase in risk that left us as taxpayers holding the bag at the end the day is what took us over the precipice.  So you’re saying Dodd-Frank hasn’t really done a whole lot so far.

Bethany McLean:  I think that there are ways around it, and on top of that, the Volcker Rule isn’t even going to be enacted for two plus years.  So between now and then you can bet that there will be just a continued, enormous, ferocious lobbying push.

Eliot Spitzer:  I completely agree.   TBTF, too big to fail, is worse now than it was before the crisis.  We are the formal federal backstop behind these banks, giving them every reason to bet bigger and more ferociously:  to use your words, we’ve gone the wrong way.

The only positive sign recently was that shareholders actually stood up this week under the “say-on-pay” rule and said they’d had enough with Vikram Pandit, actually one of the nicer of the guys of the CEOs out there.   So are shareholders beginning to flex their muscles a little bit?

Bethany McLean:  I really hope that this is a sign that that’s the case.  And one of the most powerful agents for change could be shareholders if they chose to exercise their power.  And in the past they have been unwilling to do so, I think, because many big institutional investors their firms also manage big companies 401K business and they don’t want to be too activist and risk losing the lucrative money management business.

Eliot Spitzer:  Bethany, can I interrupt? I’m so glad you said it that way.  I’d made that point at a mutual fund conference several years, many years, back now and I was descended upon as though I said something that was sacrilegious.  You’re exactly right.  Institutional investors refused to stand up even though they have a fiduciary duty.  We will have a whole other session on this some other day.  But you just said something so critically important about why shareholders and institutional investors don’t do what they should be doing.

I want to pivot for one second.  Another issue. There is this rationale out there:  Treasury is saying, look TARP has made money for taxpayers.  Do you buy it?

Bethany McLean:  I don’t think that’s the right question.  You could quibble with some of the accounting, first of all, but even underneath that, the question isn’t whether it has made money for taxpayers or not; the question is, the first one is, has it made enough money for taxpayers.  In other words were taxpayers fairly rewarded for the risk we took?  And I think the clear answer to that is no.  And the second answer is has TARP left us in better shape? Has the system been changed such that what happened in two thousand eight can’t happen again, and the clear answer to that is no.

Eliot Spitzer:  That’s exactly right.  And to a certain extent, it was hide the critical issue.  To another extent it was when the government came in with unlimited capacity to keep buying, inevitably it was going to drive those share values up, make the banks solvent, so we could almost guarantee it would be able to sell at the end of the day for more than it paid for.  But as you point out, that’s not the critical question.

A little bit of time left.  You deal all the time with major financial institutions.  You have your finger on the pulse of the economy.  The economy is likely to be the outcome determinative in terms of November’s Presidential race.  Do you think the economy’s coming back, and I mean by the economy not just finance and the banks, I mean that the economy writ large where real jobs are created?

Bethany McLean:   I don’t, and I tend to be probably too much of the skeptic, a contrarian, by nature so take what I say with a grain of salt.  But I think that the conditions that led to the financial crisis were actually driven a lot by growing income inequality, in a lack of jobs, people were taking equity out of their homes in order to be able to spend and live, and we have not addressed these fundamental issues yet.  And now we have a fundamental issue of an overly indebted society, both consumers and the government, on top of that.

So to my mind we have two really fundamental issues.  Where are jobs going to come from in the future, and how are we going to get rid of our debt, both as a country and as people. And until we start having a conversation about those topics, I guess I have a hard time getting all worked up over monthly job figures.

Eliot Spitzer:  Yes, you’re exactly right. We deleveraged one sector, which was the banks, by shifting a lot of their debt to the public sector.  We have not sufficiently deleveraged the housing market, which is why so many people are both underwater and cannot use their homes as equity, which drove so much of consumer spending in the past fifteen years.  Without those drivers, I’m with you: I have a hard time seeing where the economy comes back and how it comes back.

Anyway, Bethany McLean, Vanity Fair contributing editor.  Thank you so much for your time tonight.

Bethany McLean:   Thank you so much.

William Brighenti is a Certified Public Accountant, Certified QuickBooks ProAdvisor, and Certified Business Valuation Analyst. Bill began his career in public accounting in 1979. Since then he has worked at various public accounting firms throughout Connecticut. Bill received a Master of Science in Professional Accounting degree from the University of Hartford, after attending the University of Connecticut and Central Connecticut State University for his Bachelor of Arts and Master of Arts degrees. He subsequently attended Purdue University for doctoral studies in Accounting and Quantitative Methods in Business. Bill has instructed graduate and undergraduate courses in Accounting, Auditing, and other subjects at the University of Hartford, Central Connecticut State University, Hartford State Technical College, and Purdue University. He also taught GMAT and CPA Exam Review Classes at the Stanley H. Kaplan Educational Center and at Person-Wolinsky, and is certified to teach trade-related subjects at Connecticut Vocational Technical Schools. His articles on tax and accounting have been published in several professional journals throughout the country as well as on several accounting websites. William was born and raised in New Britain, Connecticut, and served on the City's Board of Finance and Taxation as well as its City Plan Commission. In addition to the blog, Accounting and Taxes Simplified, Bill writes a blog, "The Barefoot Accountant", for the Accounting Web, a Sift Media publication.
View all posts by William Brighenti →
This entry was posted in Accountants CPA Hartford, Articles and tagged Bethany McLean, bets on corporate bonds, Bruno Iksil, Contributing editor to Vanity Fair, Current TV, derivative trading, Dodd-Frank, Eliot Spitzer, Enron Scandal, Glass-Steagall, hedging, JPMorgan Chase, proprietary trading, say-on-pay rule, TARP, TBTF, the Dark Ages of Wall Street, The Smartest Guys in the Room, too big to fail, transcript, video, Viewpoint April 20 2012, Vikram Pandit, Volcker Rule, Voldemort. Bookmark the permalink.

One Response to The Dark Ages of Wall Street. Viewpoint Interview of Bethany McLean by Eliot Spitzer on Current TV, April 20, 2012. Video transcript.