A tale of two Obamas: Dr. Jeckyll in a campaign; Mr. Hyde in office. Whatever happened to the fierce urgency of now? 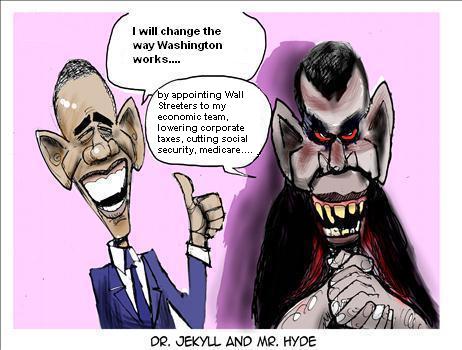 There are two Obamas: the one as a progressive candidate, calling for immediate change; and the other as a conservative Democrat, appointing Wall Streeters as his top economic advisors. The campaigner speaking on behalf of Main Street; and the President catering to Wall Street.

What follows is a selective, partial, loose “transcription” of Cenk Uygur’s thoughts on the two Obamas.

Cenk Uygur:  I want to discuss something that Arianna Huffington brought up on the Huffington Post:  Obama versus Obama.  The campaign Obama, whom we all like and was a wonderful progressive; we didn’t agree with everything that he said on the campaign but overall we take it; in fact, that is how we voted.  Governing Obama, a little different.

Now we put together here a compilation of the two different Obamas.  Watch for yourself.

[While campaigning for President, Obama said about Guantanomo:]

Obama:  We are going to lead by shutting down Guantanomo and restoring habeous corpus in this country.

[But while governing as President, Obama said about Guantanomo:]

One way where we have fallen short is closing Guantanomo.  I wanted to close it sooner; we have missed that deadline.

[While campaigning for President, Obama said about the Washington Wall Street insiders:]

You understand that in this election the greatest risk we can take is to try the same old politics with the same old players and expect a different result.

[But while governing as President, Obama said about the Washington Wall Street insiders:]

Larry Summers also brings a singular combination of skill, intellect, and experience to the role that he will play in our administration.

[While campaigning for President, Obama said about changing the way Washington works:]

I am running because of what Dr. King called the fierce urgency of now, because I believe that there is such a thing as being too late.

[But while governing as President, Obama said about changing the way Washington works:]

I always believed that this was a long-term project.

Cenk Uygur:  The fierce urgency of now.   How do we get the campaign Obama to become the governing Obama?

Dean Obeidallah:  …I don’t know if it’s possible frankly, Cenk.  There is so much involved in our form of government that involves compromise….It’s going to take time.  He’s a president; he is not a king…It’s give and take with Congress…It’s a different reality.

Cenk Uygur:  Not buying it….If it was just, what could I do?  I couldn’t close down Guantanomo because the Republicans blocked it.  Then I would say that’s perfectly fair.

But there are so many times, when nominating Elizabeth Warren, he said “I can’t do it, the Republicans are blocking it,” but then he does a recess appointment anyway.

So many times he makes a choice.  Larry Summers during that clip:  oh, I don’t want the same old guys.  Here’s freaking Larry Summers, who started the recession in the first place in a lot of ways.

So I don’t know.  Laura, let me get your thoughts on it.

Laura Bassett:  …But there are decisions that he made as President:  Larry Summers.  Congress did not have a knife to his throat telling him that he had to appoint Larry Summers for that position.  There are certainly ways that he could have compromised less and been a stronger President….

Dean Obeidallah:  …He got there, things were different….There’s practicality….

When you look at this intent issue, and you see the economic team and you see all the decisions that he made, do you really think that he thought that he was going to change the way Washington works?

The Barefoot Accountant:  Of course, President Obama never intended to change the way Washington works.  Cenk Uygur is correct.  There is too much evidence to the contrary, beginning on his first day in office, appointing all those Wall Streeters to his economic team.

Obama talks left, walks right.  He walks right to the political donors on Wall Street.  He is a politician first and puts his political and personal future before country and campaign promises.

Perhaps he learned the art of political livelihood from his Democratic predecessor, Bill Clinton, who supported NAFTA, deregulation of Wall Street, and corporate America, at the expense of the middle class.  Bill Clinton is very prosperous now, worth well over one hundred million dollars, far from the net worth of $250,000 when he first ran for the Presidency.  Bill Clinton receives $100,000 to $200,000 for every speech he gives today, like the one he gave in Hartford, Connecticut yesterday.  Over the ten years after leaving the office as President, Bill Clinton earned $75.6 million for paid speaking engagements, averaging $181,000 per event.  One can only imagine how many millions Barack Obama will earn giving speeches after his term in office.

Not bad for representing the interests of Corporate America and Wall Street, is it?

William Brighenti is a Certified Public Accountant, Certified QuickBooks ProAdvisor, and Certified Business Valuation Analyst. Bill began his career in public accounting in 1979. Since then he has worked at various public accounting firms throughout Connecticut. Bill received a Master of Science in Professional Accounting degree from the University of Hartford, after attending the University of Connecticut and Central Connecticut State University for his Bachelor of Arts and Master of Arts degrees. He subsequently attended Purdue University for doctoral studies in Accounting and Quantitative Methods in Business. Bill has instructed graduate and undergraduate courses in Accounting, Auditing, and other subjects at the University of Hartford, Central Connecticut State University, Hartford State Technical College, and Purdue University. He also taught GMAT and CPA Exam Review Classes at the Stanley H. Kaplan Educational Center and at Person-Wolinsky, and is certified to teach trade-related subjects at Connecticut Vocational Technical Schools. His articles on tax and accounting have been published in several professional journals throughout the country as well as on several accounting websites. William was born and raised in New Britain, Connecticut, and served on the City's Board of Finance and Taxation as well as its City Plan Commission. In addition to the blog, Accounting and Taxes Simplified, Bill writes a blog, "The Barefoot Accountant", for the Accounting Web, a Sift Media publication.
View all posts by William Brighenti →
This entry was posted in Accountants CPA Hartford, Articles and tagged a tale of two Obamas, Arianna Huffington, Ben Bernanke, Bill Clinton, broken campaign promises, Cenk Uygur Current TV March 15 2012, change the way Washington works, closing Guantanomo, Dean Obeidallah, Dr. King, Elizabeth Warren, Huffington Post, Larry Summers, Laura Bassett, Obama a progressive in an election a conservative in office, Obama Dr. Jekyll and Mr. Hyde, Obama economic team, Peter Orszag, President Clinton, public option, recess appointment, the fierce urgency of now, the two faces of Obama, Tim Geithner, two-faced Obama. Bookmark the permalink.