Should corporate taxes be lowered when the effective tax rate of corporations is only 12.1%?

Posted on February 29, 2012 by William Brighenti
Get the Flash Player to see this content. 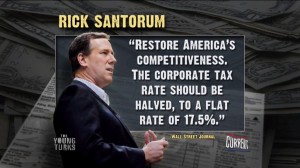 Cenk Uygur:  We always hear from Republicans that taxes are too high, especially when it comes to corporations because those are the guys who fund their campaigns.  In fact, Rick Santorum just wrote an op-ed saying in order to “Restore America’s competitiveness, the corporate tax rate should be halved, to a flat rate of 17.5%.”  Brilliant:  cut corporate taxes even more, as if corporations in America were not getting enough of a big enough break.  Absurd. 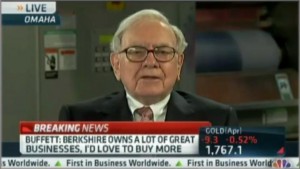 But there is one guy who is taking them on:  it’s Warren Buffett.  Let us hear him out.

Warren Buffett:  But it is a myth that the American corporations are paying 35% or anything like it.  Corporate taxes are not strangling American competitiveness. 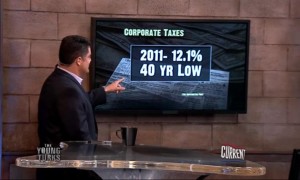 Let’s go to the next set of numbers.  I will talk slowly so you can understand, GOP. 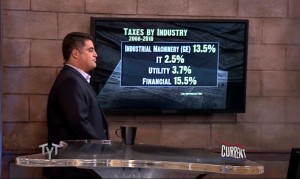 Now here is the effective tax rate for all of these different industries: 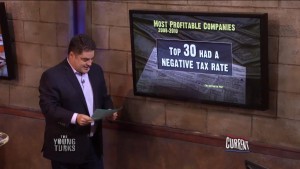 Do you know what that means?  We are giving them money.  They are not giving us money in taxes; we are giving it back to them.  It is insanity.

How about GE?  Jeffrey Immelt is now the head of the Job’s Council for President Obama.  They must be giving back to the community, etc.; they are such good citizens.  Let’s check out the numbers. 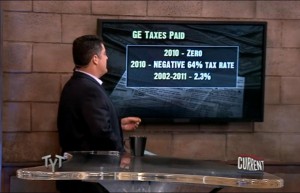 Nobody is paying 35%.  And they get rewarded by going on the President’s Job’s Council, like they are some great guys or something. 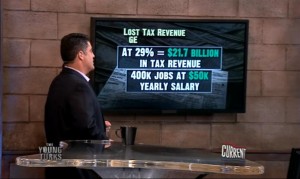 Now let me give you some more numbers on GE.  If they just paid the 29% tax rate, that would have brought in an additional $21.7 billion in tax revenue.   That could have created 400,000 jobs at $50,000 a year salary.  This is what happens when corporations don’t pay their taxes.  And at the end of all this, they are still bitching that they did not get enough of a tax break.  Are you kidding me?

Now here comes big loud-mouth Chris Christie and McConnell to complain that they are still paying too much, and complaining about Buffett.

Chris Christie:  He should just write a check and shut up.  Really, and just contribute, okay?   The fact of the matter is that I am tired of hearing about it.  If he wants to give the government more money, he’s got the ability to write a check:  go ahead and write it.

Mitch McConnell:  With regard to his tax rate, if he is feeling guilty about it, I think he should send in a check.

And he said, if that’s how it works, for every Republican that pays extra voluntary taxes, I’ll match it.  And he said for Mitch McConnell, I’ll go three to one.  Every dollar he pays in taxes voluntarily, I’ll pay three times as much.  Do you know how much Mitch McConnell has paid extra?  Zero.  Not at all, because they don’t mean a word of it.

But you must think if they are paying such low taxes, their profits must be in trouble, there was a recession, right?  Sixty year high for profits. 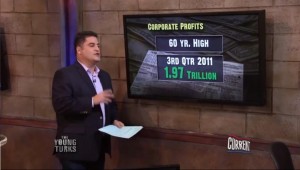 But when it comes to their paying their taxes, are they going to pay it?

They are not going to pay it. 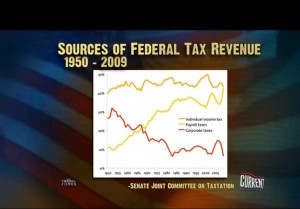 In fact, look at the chart from 1950 to 2009.  I think this is a killer chart.  This is the corporate taxes as a percentage of all of our taxes.  It nosedives.  It goes from around 30% to around 6% to 5%.  And then do you see the graph going way up?  The yellow number there?  That’s the percentage of taxes paid by us through the payroll tax.  Somebody’s got to pay the tax.  So when corporations don’t pay their taxes, who does?  You do!  The percentage of taxes that you pay through the payroll tax goes way up!

Look, this is about justice.  The corporations are not paying too much; they are paying too little.  The effective rate is 12.1%.  So when they don’t pay their taxes, we have to pay more.  It ain’t right.  Warren Buffett is 100% right.  And Chris Christie should shut his mouth.

William Brighenti is a Certified Public Accountant, Certified QuickBooks ProAdvisor, and Certified Business Valuation Analyst. Bill began his career in public accounting in 1979. Since then he has worked at various public accounting firms throughout Connecticut. Bill received a Master of Science in Professional Accounting degree from the University of Hartford, after attending the University of Connecticut and Central Connecticut State University for his Bachelor of Arts and Master of Arts degrees. He subsequently attended Purdue University for doctoral studies in Accounting and Quantitative Methods in Business. Bill has instructed graduate and undergraduate courses in Accounting, Auditing, and other subjects at the University of Hartford, Central Connecticut State University, Hartford State Technical College, and Purdue University. He also taught GMAT and CPA Exam Review Classes at the Stanley H. Kaplan Educational Center and at Person-Wolinsky, and is certified to teach trade-related subjects at Connecticut Vocational Technical Schools. His articles on tax and accounting have been published in several professional journals throughout the country as well as on several accounting websites. William was born and raised in New Britain, Connecticut, and served on the City's Board of Finance and Taxation as well as its City Plan Commission. In addition to the blog, Accounting and Taxes Simplified, Bill writes a blog, "The Barefoot Accountant", for the Accounting Web, a Sift Media publication.
View all posts by William Brighenti →
This entry was posted in Accountants CPA Hartford, Articles and tagged Cenk Uygur the Young Turks Current TV February 28 2012, chart of sources of federal tax revene 1950 to 2009, Chris Christie, corporate profits 3rd quarter 2011 $1.97 trillion, corporate taxes at 40 year low, GE has paid 2.1% taxes over last decade, GOP want lower corporate taxes, head of Obama's Job's Council, higher corporate tax rates creates jobs, Jeffrey Immelt, lowering corporate tax rates, Mitch McConnell, most profitable companies had negative tax rates, Obama proposes lowering corporate tax rate to 28%, Republicans want lower corporate taxes, Rick Santorum, shifting tax burden from corporations to individuals, should corporate tax rates be lowered when their effective tax rate is only 12.1%, Tax rates by industry, top corporations pay no taxes, Warren Buffett. Bookmark the permalink.

2 Responses to Should corporate taxes be lowered when the effective tax rate of corporations is only 12.1%?