The conflict between the rich and the poor has become very strong over the past two years.

Posted on January 13, 2012 by William Brighenti
Get the Flash Player to see this content. 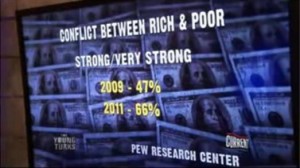 Cenk Ugur: We’ve got a new PEW Research Center study out saying that Americans are pissed about the state of our economic inequality. In fact, since 2009 things have gotten much, much worse. The conflict between the rich and the poor is either strong or very strong: now 66% of the American people. It was just at 47% in 2009. In just two years people have caught on as to what Warren Buffett said, we’ve got class warfare and unfortunately the upper class is winning. And they get the sense of injustice, and they are totally right about that. 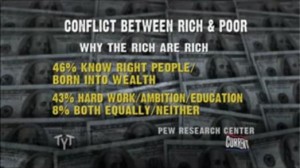 But another interesting question in the PEW study was about why are rich people rich. That had an interesting answer. 46% said that they knew the right people or were born into wealth. 43% said that they work hard, ambition, or they got an education. 8% said both equally or neither. 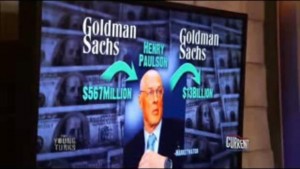 A lot of those numbers are right. Some people were born rich, like George W. Bush whose father was rich; and some people earned it: Oprah Winfrey, Michael Jordan, Steve Jobs, Bill Gates, etc. But those people are not the issue here. And I don’t want anybody to generalize. Don’t hate the rich: that’s the craziest thing ever. Your local doctor is richer than the plumber. That’s okay: everybody gets that; nobody is opposed to that.

The question is, is there a certain subset of the rich who got there unfairly? Who fixed the system to be able to do that? And the answer to that unfortunately is yes. And that’s what people are angry about. In fact, I’ll give you just a couple of examples of what we are discussing.

Remember Hank Paulson? He was the CEO for Goldman Sachs, the head of one of the largest financial institutions in the country. And when he was there he had made $567 million from Goldman Sachs. He went over to the Treasury Department, where he was the head of the Treasury for the Bush administration, and what did he do? He gave Goldman Sachs a $13 billion backdoor bailout from AIG after the economic collapse. And that is one of so many different things that Hank Paulson and his cronies inside the Treasury Department and at the Fed did during the bailouts.

Now you have to understand why that is so unfair. What does a backdoor bailout mean? Goldman Sachs basically had made a bet that AIG in case of a disaster would be able to pay them. It turns out that AIG went bankrupt. They shouldn’t have been able to pay them at all. In those cases, with the conservatives saying, free market, you lose all of your money, it’s bad news for you. But in this case, it wasn’t. It was a sad day for us because the former CEO of Goldman Sachs was the Treasury Department head so he talked to Tim Geithner, among others, and said not only are we going to have this bankrupt company pay back Goldman Sachs with taxpayer money but we are going to do it at 100%.

That’s crazy. No way in a business deal when a company goes bankrupt and they owe a certain amount of money that they pay 100% of that. They went bankrupt. They pay at best a small percentage of that money. That’s normal business. But in this case we did not have normal business. They took $13 billion of your money, they took it out of our pockets, and they gave it to Goldman Sachs because the guy running the shop was from Goldman Sachs and had made over $500 million from Goldman Sachs.

That’s what we are angry about because they fixed the system. They took our money. If you made your own money, God bless your heart, we are all Americans, we have no problem with that.

Now in one other example is how they fixed the tax system. The Walton family is unbelievable. Do you know that six heirs of Sam Walton, who created Walmart, have the equivalent in wealth of 100 million Americans? Just six people have the wealth of 100 million Americans. So what have they been doing? They have been arguing all this time that the estate tax needs to be lowered. Why? Because the estate tax is so important to the Walton family. When their father passed away, they needed it to be lowered so that they could get paid more even though they weren’t the ones who had set up the business.  And when their kids are going to get the money from them–those kids didn’t do anything to set up the business either–but they are all going to get fabulously wealthy, and they want to be even richer.  So what do they do?  They buy politicians.  [Of course!]

From 1999 to 2006 alone, the Walton family spent over $10 million lobbying to lower taxes, especially the estate tax.  $10 million is a lot of money, but where did it get them? Combined with the expenditures from other rich families and other rich interests that gave money to all these politicians, they succeeded:  in 2010, as part of the tax cut deal, the Obama administration agreed with the Republicans that the estate tax should be lowered from 55% to 35%!

What did the Walton family gain from that? Given that they have a fortune of $84 billion, if you do the math, they gained about $16.8 billion. If you give about $10 million to buy some politicians, you get about $17 billion in return.  [Not a shabby return on one’s investment, is it?]

There’s nothing wrong with the Walton family making their money. But when they fix the system so that they don’t pay their fair share, and their grandchildren don’t pay their fair share on money that they didn’t even earn, their grandpapa earned, it isn’t right!  That’s what Americans are now upset about.  That’s what they recognize.  Unfortunately almost none of our politicians recognize that because they are the guys who got bought by these rich interests.  [It’s legalized bribery.]

So it’s our job to point it out here.  It’s part of the reason we call this place rebel headquarters because that is what we are talking about when we say that we are against the establishment.  The Hank Paulsons of this country are robbing us blind.  The Waltons pay less taxes, as the average guy pays more taxes.  [America is a great country, isn’t it…if you happen to be rich.]

Warren Buffett has put out a call to many of the executives of the top companies saying if you can show that you pay more in taxes than your secretary does as a percentage of your income, that he will give them a tremendous amount of money. None of them have taken him up on it. Why? Because they all pay less than you in taxes as a percentage. Why? They fix the system. They bought our politicians.

Unfortunately we don’t have a representative democracy anymore.  That’s what we got to fight back against.

William Brighenti is a Certified Public Accountant, Certified QuickBooks ProAdvisor, and Certified Business Valuation Analyst. Bill began his career in public accounting in 1979. Since then he has worked at various public accounting firms throughout Connecticut. Bill received a Master of Science in Professional Accounting degree from the University of Hartford, after attending the University of Connecticut and Central Connecticut State University for his Bachelor of Arts and Master of Arts degrees. He subsequently attended Purdue University for doctoral studies in Accounting and Quantitative Methods in Business. Bill has instructed graduate and undergraduate courses in Accounting, Auditing, and other subjects at the University of Hartford, Central Connecticut State University, Hartford State Technical College, and Purdue University. He also taught GMAT and CPA Exam Review Classes at the Stanley H. Kaplan Educational Center and at Person-Wolinsky, and is certified to teach trade-related subjects at Connecticut Vocational Technical Schools. His articles on tax and accounting have been published in several professional journals throughout the country as well as on several accounting websites. William was born and raised in New Britain, Connecticut, and served on the City's Board of Finance and Taxation as well as its City Plan Commission. In addition to the blog, Accounting and Taxes Simplified, Bill writes a blog, "The Barefoot Accountant", for the Accounting Web, a Sift Media publication.
View all posts by William Brighenti →
This entry was posted in Accountants CPA Hartford, Articles and tagged 55% to 35% estate tax reduction 2010, AIG, Bill Gates, Cenk Uygur Currentv January 12 2011, class war between rich and poor, conflict between rich and poor, estate tax, Federal Reserve, Goldman Sachs, Goldman Sachs backdoor bailout, Hank Paulson, Michael Jordan, Oprah Winfrey, Pew Research Center study, Steve Jobs, Timothy Geithner, Treasury Department, video transcript, Walton family, Warren Buffett. Bookmark the permalink.

2 Responses to The conflict between the rich and the poor has become very strong over the past two years.