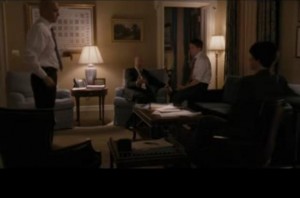 Wall Street started bundling home loans together as mortgage-backed securities and selling slices of those bundles to investors.  And they were making big money.  So they started pushing the lenders saying, “come on, we need more loans.”

The lenders already had given loans to borrowers with good credit so they went bottom feeding:  that is, they lowered their criteria.   Before you needed a credit score of 620 and a down payment of 20%; later they would settle for 500, no money down.  And the buyer, the regular guy on the street, assumed that the experts knew what they were doing.  He said to himself, “if the banks are willing to loan me money, I must be able to afford it.”  So he reached for the American Dream:  he bought that house.

The banks knew that securities based on shit-bagged mortgages were risky.  So to control their downside, the banks started buying a kind of insurance.  If mortgages defaulted, the insurance company would pay:  “default swaps”.  The banks insured their potential losses to move the risk off their books so they could invest more, and make more money.  While a lot of companies insured their stuff, one was dumb enough to take on an almost unbelievable amount of risk:  AIG.

Why did they do that?  Fees!  Hundreds of millions in fees.  AIG figured that the housing market would just keep going up.

But then the unexpected happened:  housing prices went down.  Why?  The poor bastards who bought their dream houses, when the teaser rates on their mortgages ran out, their payments went up beyond what they could afford to pay, and they defaulted.  And with the high default rates, the supply of existing housing on the market dramatically increased, driving prices down.  As a result of the spiraling increases in defaults, and the falling prices in housing prices, the mortgage-backed securities tanked, and AIG not only had to pay off the swaps, but it had to pay all of them  off, all over the world, and all at the same time.  Needless to say, AIG could not pay, and therefore AIG went under.

Since AIG had insured a great number of banks, they all booked massive losses at the same time.  And many of them, in turn, went under.  And the whole financial system came tumbling down in 2008.

You may wonder, why wasn’t it regulated?  The simple answer is that no one in the financial services industry wanted it regulated.  They were all making too much money.

William Brighenti is a Certified Public Accountant, Certified QuickBooks ProAdvisor, and Certified Business Valuation Analyst. Bill began his career in public accounting in 1979. Since then he has worked at various public accounting firms throughout Connecticut. Bill received a Master of Science in Professional Accounting degree from the University of Hartford, after attending the University of Connecticut and Central Connecticut State University for his Bachelor of Arts and Master of Arts degrees. He subsequently attended Purdue University for doctoral studies in Accounting and Quantitative Methods in Business. Bill has instructed graduate and undergraduate courses in Accounting, Auditing, and other subjects at the University of Hartford, Central Connecticut State University, Hartford State Technical College, and Purdue University. He also taught GMAT and CPA Exam Review Classes at the Stanley H. Kaplan Educational Center and at Person-Wolinsky, and is certified to teach trade-related subjects at Connecticut Vocational Technical Schools. His articles on tax and accounting have been published in several professional journals throughout the country as well as on several accounting websites. William was born and raised in New Britain, Connecticut, and served on the City's Board of Finance and Taxation as well as its City Plan Commission. In addition to the blog, Accounting and Taxes Simplified, Bill writes a blog, "The Barefoot Accountant", for the Accounting Web, a Sift Media publication.
View all posts by William Brighenti →
This entry was posted in Accountants CPA Hartford, Articles and tagged AIG, bank investment mortgage fraud, CDO, CDS, collaterized debt obligations, Credit Default Swaps, Derivatives, fraud, Hank Paulson, how did the economic collapse of 2008 occur, Lehman Brothers, mortgage lenders, the need for governmental regulation, too big to fail, Treasury Department, Wall Street, what are derivatives, what caused the collapse of housing market, what caused the recession of 2008, what caused the world's depression, why America got broken, why banks need to be regulated. Bookmark the permalink.