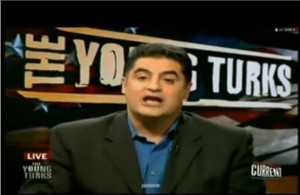 Cenk Uygur:  You often hear the excuse from the government:  “Well, we would love to do the financial fraud cases but we just don’t have the resources and besides we have been awfully tough on the banks.”  Laugh along with me.

But Steve Kroft on 60 Minutes actually did a very good story where he talked to Larry Brewer who is the head of the Criminal Division at the Department of Justice, and he asked him about the Sarbanes Oxley Act.  The Sarbanes Oxley Act is an act that says CEOs have to sign on saying they are not committing any fraud in this company, and if it turns out not to be true, they get up to five years in prison.

Now with this financial collapse, companies like Countrywide where there was widescale fraud is a perfect place to use the Sarbanes Oxley Act to hold those top executives accountable.  And Kroft asks him here in this segment of the interview why he didn’t do this.

Steve Kroft:  Do you lack confidence of bringing cases under Sarbanes Oxley? 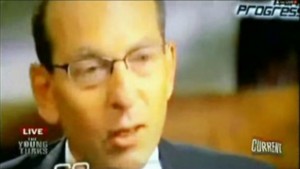 Larry Brewer:  Steve, no one has really accused this Department of Justice or this Division or me of lacking confidence.  If you look at the prosecutors all over the country, they are bringing record cases with respect to all kinds of criminal laws.  Sarbanes Oxley is a tool but it’s only one tool.

Cenk Uygur:  No one is accusing you?  I’m accusing you.  And record cases?  That simply isn’t true.  In fact, we have the numbers to show you. 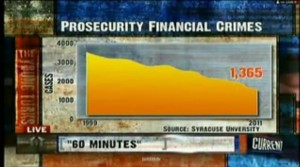 A Syracuse study actually looked into this and they found out that the prosecution of federal financial cases went from a high of about 3,500 cases in 1999 down to 1,251 cases in 2011, and 1,365 cases in the last full year of 2010. So that number went way down, not up:  fraud cases down 57%.  So what happened to the fearsome Obama Department of Justice that no one accused of not following through on these cases?  I accuse you because I have the numbers. 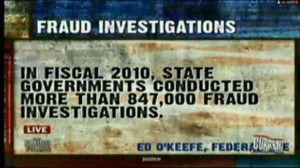 A lot of people will say, Cenk, you don’t understand, there is nothing that they can do, they just don’t have the resources.  Really?  Interesting because David Sirota points out in an article in the Washington Post today about when the government goes after food stamps.  It turns out that when they are going after food stamp fraud, they’ve got plenty of resources. 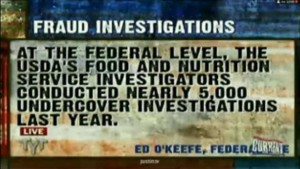 In fact, at the state level in 2010 they conducted 847,000 fraud investigations.  Okay that’s the state level, but how about the federal level?  Nearly 5,000 undercover investigations, which take longer, 5,000 versus only 1,200 against the financial executives.  Gee, I wonder where their priorities are; I can’t quite tell.

By the way, do you know how much there is in food stamp fraud in the country?  $753 million.  Now that sounds like a lot, and I want you to pursue that, I don’t want there to be fraud at that level, but the banks did not do millions, they did billions, not billions, sometimes trillions of dollars from us.  That’s much more important but somehow you just can’t find the resources for it. 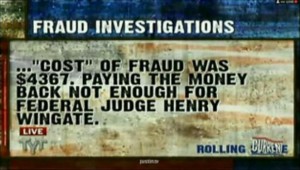 Matt Taibbi also had a good piece about this.  He talked about a mother of two in Mississippi, named Anita McLemore, she apparently asked for food stamps when she had a criminal record, having been busted on drugs before.  How dare you?  Apparently you can’t feed your kids if you have a criminal record from before.  So they said, this is fraud.  We got you.  How much fraud did she do?  She did $4,367 of fraud.  Not millions, not billions, not trillions, just $4,367 worth of fraud.  Do you know how much she got?  She got three years in prison.

Here’s what Judge Wingate said when sending her away:

“The defendant’s criminal record is simply abominable …. She has been the beneficiary of government generosity in state court.”

Well, how about the guys that have been the beneficiary of trillions of dollars at the federal level?  No, we don’t have resources for them.  We have to go after mothers of two who are trying to feed their kids. 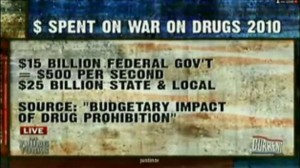 But there are other things that we spend our money on.  How much money did we spend on the war on drugs?  $15 billion that the federal government spent:  that’s $500 a second.  You see, when you have the resources, apparently you know where to spend them.  $25 billion at the state and local level as well.  So $40 billion for the war on drugs, but for financial fraud, golly gee willickers, we just ran out of time and money, we were just about to get to it after the war on drugs and food stamp fraud.

Do you know how much they spent in New York City just evicting Occupy Wall Street?  $13 million.  But golly when it comes to Goldman Sachs, what’s weird is that they  just ran out of time.

By the way, Goldman Sachs, I believe, was the number one contributor to Barack Obama’s campaign in 2008.  A wild coincidence I’m sure.

Now let me explain something to you.  It’s not like I think Obama is personally corrupt like he gets in a smoked-filled room with Lloyd Blankfein and says, how do you want me to cheat the system for you.  He’s not Blago, right?  But it is that he responds to financial incentives probably often at times not even recognizing it.

Campaign finance reform is at the root of all of this.  Until that is changed, you are going to be going for the person or the company that has the money on you.  And that’s just the way it works.   Until that is fixed, until Citizens United is turned over, until there is a constitutional amendment, that’s the root of the problem, nothing is going to change priorities wise.

William Brighenti is a Certified Public Accountant, Certified QuickBooks ProAdvisor, and Certified Business Valuation Analyst. Bill began his career in public accounting in 1979. Since then he has worked at various public accounting firms throughout Connecticut. Bill received a Master of Science in Professional Accounting degree from the University of Hartford, after attending the University of Connecticut and Central Connecticut State University for his Bachelor of Arts and Master of Arts degrees. He subsequently attended Purdue University for doctoral studies in Accounting and Quantitative Methods in Business. Bill has instructed graduate and undergraduate courses in Accounting, Auditing, and other subjects at the University of Hartford, Central Connecticut State University, Hartford State Technical College, and Purdue University. He also taught GMAT and CPA Exam Review Classes at the Stanley H. Kaplan Educational Center and at Person-Wolinsky, and is certified to teach trade-related subjects at Connecticut Vocational Technical Schools. His articles on tax and accounting have been published in several professional journals throughout the country as well as on several accounting websites. William was born and raised in New Britain, Connecticut, and served on the City's Board of Finance and Taxation as well as its City Plan Commission. In addition to the blog, Accounting and Taxes Simplified, Bill writes a blog, "The Barefoot Accountant", for the Accounting Web, a Sift Media publication.
View all posts by William Brighenti →
This entry was posted in Accountants CPA Hartford, Articles and tagged 60 Minutes, Anita McLemore, Cenk Uygur, Criminal Division, Current TV video transcript December 7 2011, David Sirota, Department of Justice, financial fraud investigations down, Goldman Sachs number one contributor to Obama, Larry Brewer, Matt Taibbi, Obama not indicting CEOs financial industry, Sarbanes Oxley, Steve Kroft, Syracuse study. Bookmark the permalink.