Posted on November 4, 2011 by William Brighenti 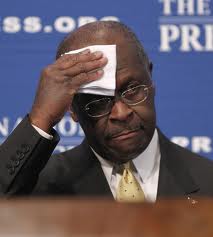 And I thought not having heat, hot water, and electricity for a week was rough!

Let’s face it:  Herman Cain had a really rough week.  Even though I did not have any heat, hot water, or electricity in Connecticut all week due to the effects of the severe snow storm Alfred, I still would not have exchanged weeks with Herman Cain.  Imagine having three women coming out and accusing you of sexual harassment in a week’s time!

Although I do not think Herman Cain is any more qualified to be President of the United States than my cat, Murphy, who, I sincerely believe, is more intelligent than Herman Cain, I do feel sorry for what he endured this week in the media.  Consequently, I decided to give him a few tips to help his campaign and to overcome any possible slip in his ratings from all of this recent publicity involving the harassment of women by him.

What do you get when you combine 6 with 9 three times? Something more meaningful than 9-9-9!

First, instead of using the 9-9-9 as the slogan for his tax plan, in keeping with his recent alleged sexual notoriety and his alleged sexual harassment, I suggest that he capitalize on such by changing his numbskull nein-nein-nein slogan to one conveying a more human and loving touch, such as 69-69-69.  That would certainly be an attention getter!  It definitely would be a little more catchy than the redundant 9-9-9, with its devilish combination of Michele Bachmann’s assessment of Herman Cain’s tax plan–that is, her renaming of it as the 6-6-6 tax plan–with Herman’s simplistic 9-9-9, while at the same time reminding all of us of how well he successfully settled those sexual harassment charges against him, the little devil.  This is certain to appeal to the majority of voters, especially to those who have not the faintest idea of its sexual connotations, and to the religious right, the most important voting segment of the Republican party, because of its devilish overtones and because, quite frankly, many of them do not have the faintest idea of its sexual connotations either. 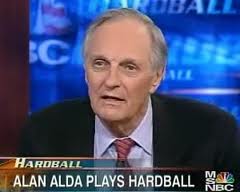 “Since you spent the night at my apartment, I thought that I would serve you breakfast in bed.”

And instead of slogans containing Coolidge allusions to his former pizza business, such as a “pizza in every oven”, I again suggest something more human, kinder, and less chauvinistic, such as, “since you spent the night at my apartment, I thought that I would serve you breakfast in bed.”  Of course, this would bestow upon Herman that sweet Alan Alda aura, helping him to get more of the woman vote in 2012, since three women in a week charging him with sexual harassment has certainly diminish his prospects in that all-important segment. 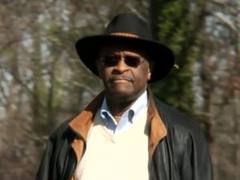 While at the same time, to prevent Herman Cain from losing any male votes from any allusions to Alan Alda in the attempt to appeal to the women voters, I would then add a counter-touch of machismo to his image with another slogan, such as, “Who’s your Daddy?”, appropriately captioned under a picture of Herman wearing a fedora and sunglasses and resembling a pimp, which is actually the true vocation of all politicians, who have been known to pander for money 24/7.  Although many would advise Herman Cain to burn his pimp hat, especially in the light of sexual harassment charges, I heartily endorse him looking like a pimp since it would be a sure wallet opener for campaign contributions of at least a fin.

Other sure campaign slogan winners for Herman Cain include:

Instead of the trite “change you can believe in” or “hope and change”, how about “Herman Cain 2012 – Change…into something more comfortable!”

And instead of the idiotic “We want Cain”, how about “Cain:  You know you want it!”

Finally, how about something really honest about Cain’s supporters – “Cain will kill every Able American on the Left!”

I sure hope these modest campaign suggestions help Herman Cain.  I would hate to see him drop out of the race any time soon since that would certainly make the 2012 Republican primaries less entertaining than they have been thus far.

William Brighenti is a Certified Public Accountant, Certified QuickBooks ProAdvisor, and Certified Business Valuation Analyst. Bill began his career in public accounting in 1979. Since then he has worked at various public accounting firms throughout Connecticut. Bill received a Master of Science in Professional Accounting degree from the University of Hartford, after attending the University of Connecticut and Central Connecticut State University for his Bachelor of Arts and Master of Arts degrees. He subsequently attended Purdue University for doctoral studies in Accounting and Quantitative Methods in Business. Bill has instructed graduate and undergraduate courses in Accounting, Auditing, and other subjects at the University of Hartford, Central Connecticut State University, Hartford State Technical College, and Purdue University. He also taught GMAT and CPA Exam Review Classes at the Stanley H. Kaplan Educational Center and at Person-Wolinsky, and is certified to teach trade-related subjects at Connecticut Vocational Technical Schools. His articles on tax and accounting have been published in several professional journals throughout the country as well as on several accounting websites. William was born and raised in New Britain, Connecticut, and served on the City's Board of Finance and Taxation as well as its City Plan Commission. In addition to the blog, Accounting and Taxes Simplified, Bill writes a blog, "The Barefoot Accountant", for the Accounting Web, a Sift Media publication.
View all posts by William Brighenti →
This entry was posted in Accountants CPA Hartford, Articles and tagged 9-9-9 or 69-69-69, Alan Alda, helpful tips for Herman Cain, michele bachmann 6-6-6, new slogans for Herman Cain, sexual harassment Herman Cain, Who's your daddy Herman Cain. Bookmark the permalink.