A Need for Term Limits to Public Office at the National, State, and Municipal Levels of Government

Posted on September 22, 2011 by William Brighenti 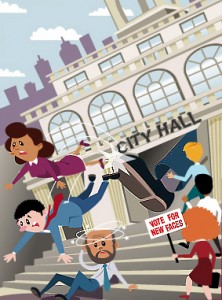 Isn’t it time to limit the public service of all individuals by adopting term limits?  Haven’t we all witnessed enough fraud, malfeasance, and misappropriation of public funds by now to realize that by allowing individuals to serve endless terms in office, power becomes entrenched and concentrated in the hands of a few?  Despots, tyrants, dictators, and God have unlimited terms.  Democracy thrives on the participation of the many, not just the few.

An effective internal control system necessitates rotation of duties.  Without such, individuals are more likely to perpetuate and conceal acts in violation of public trust.  It is not unreasonable to limit an individual’s service in a public office to no more than two terms.  We limit the term of the President of the United States to two terms; in fact, none other than Richard Nixon proposed a one term limitation to the holding of public office of six years duration.  Recall that Watergate occurred because of his desire to win a second term of office.  Imagine how different our history might have been written if he had only been allowed to serve one term in office.

Of course, term limits apply to public positions at the local level as well.  In fact, there may even be a greater need for term limits at the town level of government than at the national and state levels since a municipality often lacks adquate funds for a full-time, independent, and sufficiently-staffed internal audit department to monitor its personnel and operations on an ongoing basis.  The general public is often unaware that annual financial audits performed by outside certified public accountants are not designed to detect fraud.  Unfortunately, fraud investigations are typically initiated only after the malfeasance and misappropriation have already occurred.

Perhaps it is time for the citizens of Berlin, Connecticut and those of every municipality to consider the terms of their presently elected officials and to determine if it is time for a healthy change of public officials.  The Red Cross recognizes the need for fresh blood; and so should the residents of Berlin, Connecticut and those of other towns throughout the United States.  Rotation of duties is essential to any good internal control system and should be implemented in the public as well as in the private sphere in order to mitigate any possible abuses of entrenched power.

William Brighenti is a Certified Public Accountant, Certified QuickBooks ProAdvisor, and Certified Business Valuation Analyst. Bill began his career in public accounting in 1979. Since then he has worked at various public accounting firms throughout Connecticut. Bill received a Master of Science in Professional Accounting degree from the University of Hartford, after attending the University of Connecticut and Central Connecticut State University for his Bachelor of Arts and Master of Arts degrees. He subsequently attended Purdue University for doctoral studies in Accounting and Quantitative Methods in Business. Bill has instructed graduate and undergraduate courses in Accounting, Auditing, and other subjects at the University of Hartford, Central Connecticut State University, Hartford State Technical College, and Purdue University. He also taught GMAT and CPA Exam Review Classes at the Stanley H. Kaplan Educational Center and at Person-Wolinsky, and is certified to teach trade-related subjects at Connecticut Vocational Technical Schools. His articles on tax and accounting have been published in several professional journals throughout the country as well as on several accounting websites. William was born and raised in New Britain, Connecticut, and served on the City's Board of Finance and Taxation as well as its City Plan Commission. In addition to the blog, Accounting and Taxes Simplified, Bill writes a blog, "The Barefoot Accountant", for the Accounting Web, a Sift Media publication.
View all posts by William Brighenti →
This entry was posted in Accountants CPA Hartford, Articles and tagged Berlin Connecticut, lifetime politicians, limit politicians to two terms, municipal government, rotation of duties, term limits municipal elected officials. Bookmark the permalink.