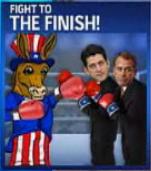 Cenk Uygur: House Democrats took their turn at the White House talking about the budget. And they made sure that the President knew their number one issue.

Nancy Pelosi: “I demonstrated the determination that we all have to reduce the deficit while preserving Medicare.”

Steny Hoyer: “Making certain that Medicare is strengthened and preserved.”

Jim Clyburn: “We must preserve Medicare.”

Cenk Uygur: “Gee, were they clear enough? Yes, I think so. Yes, I got it Medicare.” 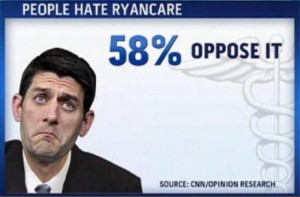 Look they’re not the only ones who want to preserve Medicare, of course.  The latest poll numbers show just how unpopular the Ryan plan is.  Here we go, again, the millionth poll in a row.  58% of Americans oppose the plan. Even conservatives don’t like it. More than half of them say that they are against the plan. So who is this, in fact, serving? It appears nobody. 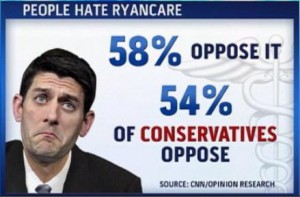 And Democrats are not letting Republicans run away from their Ryancare votes either because they know how hard it hurts them. So check out this new ad from the Progressive Change Campaign Committee.

[Woman in video clip]: “If I didn’t have Medicare, doctors bills could wipe me out. When Congressman Charlie Bass voted against Medicare, that was an attack against families just like mine.”

So it sounds like Democrats are committed to preserving Medicare, and certainly Progressives are, as you saw in that ad. So why have Democratic leaders like Steny Hoyer said that Medicare cuts are still “on the table” during these budget talks? The big question going forward: will Democrats take a stand to protect one of the most successful government programs in history or will they let Republicans needlessly win on a losing issue? 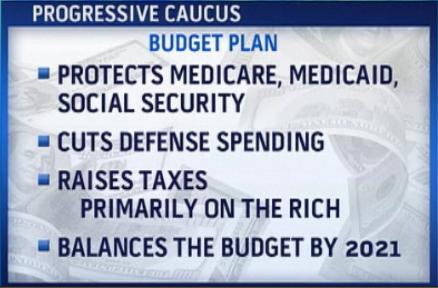 Of course, there is one plan that balances the budget and saves Medicare. It’s called the Progressive Caucus Plan. It protects Medicare, Medicaid, and Social Security, makes cuts to our massive defense budget, which is incredibly bloated and filled with pork; it also raises taxes but focused primarily on making sure the richest Americans bear their share of the burden. And what’s best, it balances the budget by 2021, that’s a decade earlier than the Ryan plan.

So why don’t we talk about that one. Alright, my view on that is very clear.

William Brighenti is a Certified Public Accountant, Certified QuickBooks ProAdvisor, and Certified Business Valuation Analyst. Bill began his career in public accounting in 1979. Since then he has worked at various public accounting firms throughout Connecticut. Bill received a Master of Science in Professional Accounting degree from the University of Hartford, after attending the University of Connecticut and Central Connecticut State University for his Bachelor of Arts and Master of Arts degrees. He subsequently attended Purdue University for doctoral studies in Accounting and Quantitative Methods in Business. Bill has instructed graduate and undergraduate courses in Accounting, Auditing, and other subjects at the University of Hartford, Central Connecticut State University, Hartford State Technical College, and Purdue University. He also taught GMAT and CPA Exam Review Classes at the Stanley H. Kaplan Educational Center and at Person-Wolinsky, and is certified to teach trade-related subjects at Connecticut Vocational Technical Schools. His articles on tax and accounting have been published in several professional journals throughout the country as well as on several accounting websites. William was born and raised in New Britain, Connecticut, and served on the City's Board of Finance and Taxation as well as its City Plan Commission. In addition to the blog, Accounting and Taxes Simplified, Bill writes a blog, "The Barefoot Accountant", for the Accounting Web, a Sift Media publication.
View all posts by William Brighenti →
This entry was posted in Accountants CPA Hartford, Articles and tagged Cenk Uygur MSNBC TV June 2 2011 transcript video, Democrats vow to continue their fight, Fight to the finish, Progressive Caucus Budget Plan. Bookmark the permalink.