Crackdown on Mediscams. Office of Inspector General of the Department of Health and Human Services announced recently that the Feds will hold CEOs of health care companies personally accountable for Medicare and Medicaid fraud.

The Office of the Inspector General (OIG) of the Health and Human Services Department (HHS) recently announced that it will be holding the Chief Executive Officers (CEOs) of Fortune 500 companies in the health care industry personally accountable for fraud and that they will be subject to criminal charges on top of the fines levied on their corporations.  The OIG is adopting this new posture because of the repeated violations of many of these Fortune 500 companies, that, upon being caught, simply have promised not to do it again, wrote out a big check to Uncle Sam, and then passed the costs of the fines onto the consumers.

Why is the OIG targeting the CEOs of the Fortune 500 companies in the health care industry?  Because it is not the little guys running Medicare fraud scams that are killing us.  It’s fraud on the industrial basis that costs us the bulk of the money.  The big health care companies commit more Medicare and Medicaid fraud than anyone else by a long shot.  That’s not just conjecture, it’s fact. 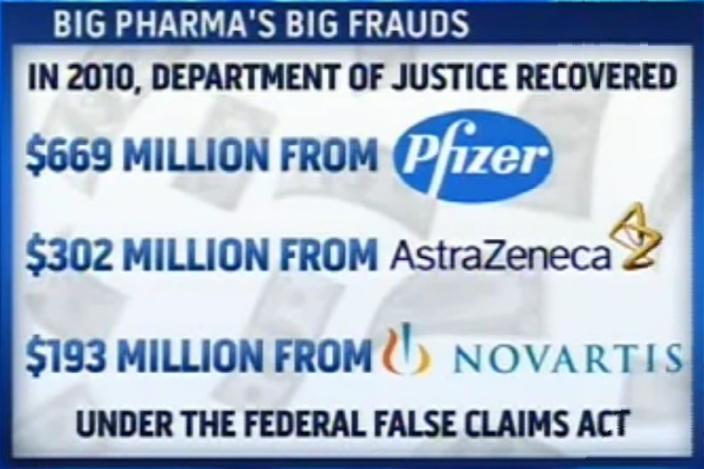 In 2010 the Department of Justice recovered $669 million from Pfizer, $302 million from AstroZeneca, and $193 million from Novartis.  And that’s just the monies that they recovered under the Fast Claims Act.

So why go after executives?  Because the fines offer no disincentives at all.  They just see it as a cost of doing business and they move on with their lives.  It’s the executives who are getting rich off of these scams.

Now the health care industry says punishing these executives isn’t fair.  But the Feds say that it’s the only way to get these companies to insist on real accountability.  With the executives ass on the line, believe me he’ll be checking twice to see if the company is ripping off the government.

Now just think about it, if this policy had been in place in the 1990s, Rick Scott might have faced jail time instead he ended up in the Florida governor’s mansion.  As Suzy Khimm of Mother Jones points out, Florida Governor Rick Scott’s company, HCA/Columbia, had to pay a record $631 million for a huge Medicare fraud case in 1997.  Scott resigned but he said that he didn’t know anything about the fraud and he didn’t face any charges.

He didn’t know that his company was running a record-breaking Medicare scam at his company?!  Come on!  Of course he knew about it.  And that’s why executives should be held responsible.  They are the ones pushing these programs, and they are the ones making money off of it.  So if you are going to do the crime, you got to do the time.  So I love this new program.

William Brighenti is a Certified Public Accountant, Certified QuickBooks ProAdvisor, and Certified Business Valuation Analyst. Bill began his career in public accounting in 1979. Since then he has worked at various public accounting firms throughout Connecticut. Bill received a Master of Science in Professional Accounting degree from the University of Hartford, after attending the University of Connecticut and Central Connecticut State University for his Bachelor of Arts and Master of Arts degrees. He subsequently attended Purdue University for doctoral studies in Accounting and Quantitative Methods in Business. Bill has instructed graduate and undergraduate courses in Accounting, Auditing, and other subjects at the University of Hartford, Central Connecticut State University, Hartford State Technical College, and Purdue University. He also taught GMAT and CPA Exam Review Classes at the Stanley H. Kaplan Educational Center and at Person-Wolinsky, and is certified to teach trade-related subjects at Connecticut Vocational Technical Schools. His articles on tax and accounting have been published in several professional journals throughout the country as well as on several accounting websites. William was born and raised in New Britain, Connecticut, and served on the City's Board of Finance and Taxation as well as its City Plan Commission. In addition to the blog, Accounting and Taxes Simplified, Bill writes a blog, "The Barefoot Accountant", for the Accounting Web, a Sift Media publication.
View all posts by William Brighenti →
This entry was posted in Accountants CPA Hartford, Articles and tagged AstroZeneca fraud, Fed cracks down on mediscams, Feds will hold CEOs of health care companies personally accountable for Medicare and Medicaid fraud, Florida Governor Rick Scott, HCA/Columbia, Medicare Medicaid fraud Fortune 500 companies, Mediscams, Novartis fraud, Office of Inspector General (OIG) of the Department of Health and Human Services (HHS), Pfizer fraud, Suzy Khimm of Mother Jones. Bookmark the permalink.