Republicans are lying when they say we don’t have a revenue problem. GOP is protecting its rich donor base.

One of the myths out there in conventional wisdom in Washington today is, we don’t have a revenue problem, we have a spending problem.  Do you know how many times Republicans say that? Below follows a sampling of this new found Republican, liturgical mantra. These Pharisees say unto you….

Eric Cantor:  “We don’t believe that Washington has a revenue problem; it’s a spending problem.”

John Beohner:  “Washington has a spending problem, not a revenue problem.” 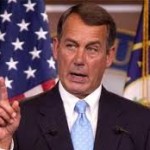 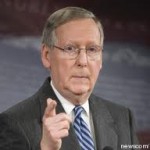 Mitch McConnell:  “We don’t have a revenue problem, we have a spending problem.”

Marsha Blackburn:  “It does not have a revenue problem; it has a spending problem.” 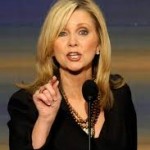 John Beohner:  “Washington doesn’t have a revenue problem; Washington has a spending problem.”

Such is the Word of the Holy Republican Gospel according to Cantor, Boehner, McConnell, and Blackburn.

And if they say it enough, you’ll believe it…right? The first cardinal rule of brainwashing: just keep repeating ad nauseum. And the first and only cardinal sin according to these Republican apostles is taxing the rich.

Obviously they say that Washington does not have a spending problem because they want to protect their rich donors who would pay more taxes, if, for example, you took away the Bush tax cuts.  But the reality is we have a huge revenue problem. 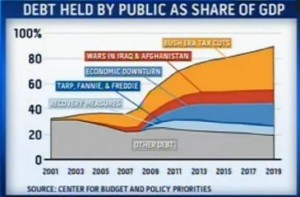 Here is a chart that the Republicans do not want you to see.  It is a chart from the Center for Budget and Policy Priorities.  The biggest part of our public debt as a percentage of Gross Domestic Product (GDP) by the year 2019 is going to be from the Bush Era tax cuts.  Then you have the wars in Iraq and Afghanistan.  Then you have the economic downturn, all three of those caused by Bush and the Republicans:  the tax cuts, the wars, and the economic downturn.  Then a tiny sliver for TARP, Fannie, and Freddie, which might get bigger later.  And then you have the rest of the debt.

In percentages, the Bush era tax cuts will account for as much as 35% of our public debt by 2019; the wars in Iraq and Afghanistan for 10%; the economic downturn by 20%; TARP, Fannie, Freddie, and recovery measures for 5%; and all the other causes of our public debt for only 20%.  So what does this show you?  We have a revenue problem.  It’s all the giant tax cuts!

The Associated Press said in an article today that people don’t want to cut medicare, but on the other hand they don’t want to raise taxes either.  But that’s not true.  They keep saying it like it’s true but it’s not true.  81% say that they want to raise taxes on millionaires.  That would help to get rid of those Bush era tax cuts, and we would be in much better shape.

Do you know what we need?  We need Democrats who are bold enough and brave enough to be actual progressives and say, “yes, we have a revenue problem; yes, we should raise taxes on people making over $250,000; and we should do it now because this country needs to balance its budget and that is the responsible way of doing it.”

William Brighenti is a Certified Public Accountant, Certified QuickBooks ProAdvisor, and Certified Business Valuation Analyst. Bill began his career in public accounting in 1979. Since then he has worked at various public accounting firms throughout Connecticut. Bill received a Master of Science in Professional Accounting degree from the University of Hartford, after attending the University of Connecticut and Central Connecticut State University for his Bachelor of Arts and Master of Arts degrees. He subsequently attended Purdue University for doctoral studies in Accounting and Quantitative Methods in Business. Bill has instructed graduate and undergraduate courses in Accounting, Auditing, and other subjects at the University of Hartford, Central Connecticut State University, Hartford State Technical College, and Purdue University. He also taught GMAT and CPA Exam Review Classes at the Stanley H. Kaplan Educational Center and at Person-Wolinsky, and is certified to teach trade-related subjects at Connecticut Vocational Technical Schools. His articles on tax and accounting have been published in several professional journals throughout the country as well as on several accounting websites. William was born and raised in New Britain, Connecticut, and served on the City's Board of Finance and Taxation as well as its City Plan Commission. In addition to the blog, Accounting and Taxes Simplified, Bill writes a blog, "The Barefoot Accountant", for the Accounting Web, a Sift Media publication.
View all posts by William Brighenti →
This entry was posted in Accountants CPA Hartford, Articles and tagged Cenk Uygur Msnbc TV May 23 2011 we have a revenue problem: video transcript with comments, GOP protecting rich donors, Republicans protecting rich donors, we have a revenue problem not a spending problem. Bookmark the permalink.

2 Responses to Republicans are lying when they say we don’t have a revenue problem. GOP is protecting its rich donor base.