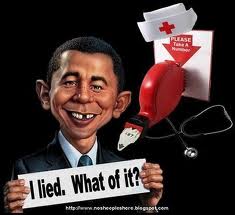 Obama has reneged on campaign promises

To reduce the federal deficit, 78% of Americans oppose cutting Medicare, while 72% are in favor of increasing taxes on the rich. Even 54% of Republicans favor this position. These numbers represent a significant majority in our country. Isn’t our government a democracy? If so, shouldn’t our government tax the rich and not cut Medicare in order to reduce the federal deficit? Isn’t that the way the government is supposed to work?  Not the way things have been going. 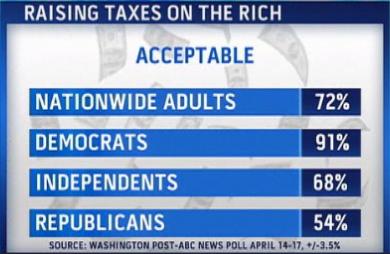 72% of all Americans are for taxing the rich to reduce our federal deficit.  According to a Washington Post – ABC News Poll conducted from April 14 through April 17, 2011, with a 3.5% margin of error, 91% of the Democratic voters, 68% of Independent voters and even 54% of Republican voters favor taxing the rich.  Doesn’t this constitute a majority?  Shouldn’t our Congresspeople vote accordingly?

The problem is that the President and Congressional Democrats compromise with the Republicans. True, the debate begins with the Democracts and Obama proposing to increase taxes on the rich, reduce military spending, while opposing any cuts to Medicare, in opposition to the Congressional Republican counter-proposal to cut every social program for individuals but to support all subsidies and tax breaks for corporations and the rich. So when the Deficit Commission starts talking about compromising, that means that the will of the majority of Americans will continue to be ignored, and Medicare and Social Security will be cut, with very little tax increases on the rich to reduce the federal deficit. But this does not represent the majority of the people, does it?

So whenever President Obama adopts his customary posture of compromise, of appeasement, he is not representing the will of the majority of the people in this country. This is against the implied law of the land, that the government must represent the will of the people. Isn’t this an act of treason, since it sabotages the Democratic governing will of the people? Isn’t this habitual positioning of Obama a felonious crime, since it involves billions, if not trillions, of dollars to be stolen from the middle class of America? If so, isn’t this an impeachable offense, much more serious than a Lewinsky piccadillo of former President Bill Clinton?

When I hear about so-called “bipartisan” groups on Capitol Hill seeking a grand compromise, such as the Senate’s so-called “Gang of Six”, I fear the worse and look for my wallet. When Senator Dick Durbin, a Democrat Senator from Illinois, a member of that Gang of Six, endorse a plan somewhere in the middle between the House Republican budget and the President’s plan, I know the Democrats and President Obama will once again cave in to the Republicans and not represent the majority of Americans, the middle class of America, the working people of America.

Our government is not supposed to be a government of compromise; it is supposed to represent the majority of Americans. Didn’t President Obama, Senator Dick Durbin, Senator Mark Warner, and Senator Kent Conrad, ever take a civics class? Compromise? And if the other side were Adolf Hitler, would Obama once again sign a Munich Agreement to meet somewhere in the middle, and throw the Slavs and the middle class under the bus? Or if this were 1861 and the two parties were debating the legality of slavery, and if the majority of the voters were against slavery, would it have been appropriate for Abraham Lincoln to appoint a commission in hopes of reaching a compromise somewhere in the middle: e.g., no slavery in the North, but slavery in the South?! Lincoln did campaign on such a compromise, proposing no slavery in any new states joining the Union, but allowing slavery in existing states; however, in retrospect, was this the right course of action in a democracy, where the majority of Americans were opposed to slavery? Ask any black citizen today, if you are uncertain.

If the super rich paid taxes at the same rates they did three decades ago, they’d contribute $350 billion more per year than they are now — amounting to trillions more over the next decade. Nor does the president’s proposal go nearly far enough in cutting military spending, which is not only out of control but completely unrelated to our nation’s defense needs. If Americans understood how much they’re paying for defense and how little they’re getting, they’d demand a defense budget at least 25 percent smaller than it is today.

No, President Obama, and no, Senators Durbin, Warner, and Conrad. Compromise or reaching the middle ground is not the mandate bestowed upon you by the American people. Your mandate is to represent the majority of the American people, not to appease those who already own 95% of our nation’s wealth. It’s time to stand up to these greedy, voracious predators and defend those who voted for you, and not those contributing to your political campaigns.

William Brighenti is a Certified Public Accountant, Certified QuickBooks ProAdvisor, and Certified Business Valuation Analyst. Bill began his career in public accounting in 1979. Since then he has worked at various public accounting firms throughout Connecticut. Bill received a Master of Science in Professional Accounting degree from the University of Hartford, after attending the University of Connecticut and Central Connecticut State University for his Bachelor of Arts and Master of Arts degrees. He subsequently attended Purdue University for doctoral studies in Accounting and Quantitative Methods in Business. Bill has instructed graduate and undergraduate courses in Accounting, Auditing, and other subjects at the University of Hartford, Central Connecticut State University, Hartford State Technical College, and Purdue University. He also taught GMAT and CPA Exam Review Classes at the Stanley H. Kaplan Educational Center and at Person-Wolinsky, and is certified to teach trade-related subjects at Connecticut Vocational Technical Schools. His articles on tax and accounting have been published in several professional journals throughout the country as well as on several accounting websites. William was born and raised in New Britain, Connecticut, and served on the City's Board of Finance and Taxation as well as its City Plan Commission. In addition to the blog, Accounting and Taxes Simplified, Bill writes a blog, "The Barefoot Accountant", for the Accounting Web, a Sift Media publication.
View all posts by William Brighenti →
This entry was posted in Accountants CPA Hartford, Articles and tagged compromise is not democracy, deficit commission, democracy is the will of the majority, gang of six, Obama's appeasement posture, President Obama does not represent Democrats nor democracy. Bookmark the permalink.