Posted on February 8, 2011 by William Brighenti 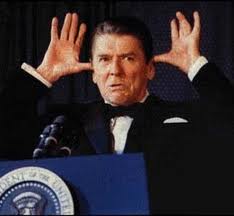 When he was president, did you know that Ronald Reagan raised taxes 11 times?  And when he was governor of California, Reagan signed into law the largest tax increase in the history of any state up until then? Now, what do you think FOX News would have said about that?

Also President Reagan almost tripled the federal budget deficit during his time in office.  The debt increased to nearly $3 trillion. That’s almost three times as much debt as the U.S. had accumulated in the first 80 years of the 20th century. That’s a lot of debt. I thought Republicans were against debt.

In addition, President Reagan also illegally gave weapons to Iran. He negotiated with terrorists. Secretly sold arms to Iran in exchange for American hostages and money for contrast. That was the Iran contra fair.  Does it get any worse than negotiating with terrorists?

And in 1984, Reagan pulled American troops out of Lebanon. President Reagan deployed an American peace keeping force in Beirut but after 241 U.S. services members were killed in a bombing ordered by Hezbollah, he ran for the hills.

President Reagan also — and this is crazy I know, but I’ll explained, he helped to start the Taliban and Osama Bin Laden. How? Reagan was trying to fight the Soviet Union which made sense but he trained, equipped and funded the Islamic Mujahideen fighters in Afghanistan. His plan backfired a little bit when they became the Taliban and Osama Bin Laden, which were the tough fighters for that group. I’m not giving all of the blame for him there. But it did turn out that way.

Now, if all that wasn’t bad enough, this one is going to sting. Reagan gave amnesty to three million undocumented immigrants. He signed a law that  made any immigrant who entered the U.S. before 1982 eligible for amnesty. Complete amnesty.

In Philadelphia, Mississippi, he gave a speech about state’s rights and that’s where some civil rights workers had died. I wonder why he gave that speech. And by the way, he was against the Anti-Apartheid legislation handed to him. He vetoed it!  Luckily, they overcame his veto.  So the one thing Reagan was conservative on was racial issues. And that didn’t really sit pretty as you can see with history.

Boy, what an American hero.

William Brighenti is a Certified Public Accountant, Certified QuickBooks ProAdvisor, and Certified Business Valuation Analyst. Bill began his career in public accounting in 1979. Since then he has worked at various public accounting firms throughout Connecticut. Bill received a Master of Science in Professional Accounting degree from the University of Hartford, after attending the University of Connecticut and Central Connecticut State University for his Bachelor of Arts and Master of Arts degrees. He subsequently attended Purdue University for doctoral studies in Accounting and Quantitative Methods in Business. Bill has instructed graduate and undergraduate courses in Accounting, Auditing, and other subjects at the University of Hartford, Central Connecticut State University, Hartford State Technical College, and Purdue University. He also taught GMAT and CPA Exam Review Classes at the Stanley H. Kaplan Educational Center and at Person-Wolinsky, and is certified to teach trade-related subjects at Connecticut Vocational Technical Schools. His articles on tax and accounting have been published in several professional journals throughout the country as well as on several accounting websites. William was born and raised in New Britain, Connecticut, and served on the City's Board of Finance and Taxation as well as its City Plan Commission. In addition to the blog, Accounting and Taxes Simplified, Bill writes a blog, "The Barefoot Accountant", for the Accounting Web, a Sift Media publication.
View all posts by William Brighenti →
This entry was posted in Accountants CPA Hartford, Articles and tagged Fox News would criticize Ronald Reagan today, GOP Republicans would not vote for Ronald Reagan today, Ronald Reagan's liberal policies, Was Ronald Reagan a liberal. Bookmark the permalink.

One Response to Would Today’s GOP Right-Wing Republicans Vote for Ronald Reagan Today?