“Liberal” is not a dirty word

Posted on January 30, 2011 by William Brighenti 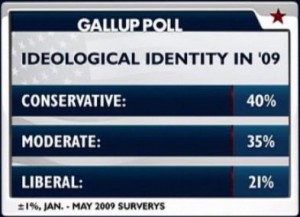 This poll is often quoted on television and in the press as definitive proof that our country is not liberal.  However, this assertion is absolute and complete nonsense.  The reason that liberals do not do well in the poll and conservatives do so much better is because of brand marketing.  For 20, 30 years now, we have had had conservative talk show hosts saying conservatives rock, liberals are terrible.   There has never been any Democratic politician step up and defend it.

For example, when Republican politicians are on television or radio, they inevitably say,  “I am the most conservative in this race.”  Have you ever heard a Democrat say  “I’m most liberal in this race?”  Almost never, right?  They don’t defend the title.  So the word has become a bad word. 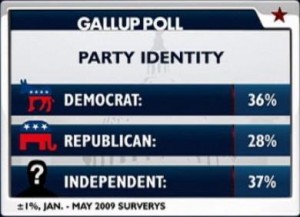 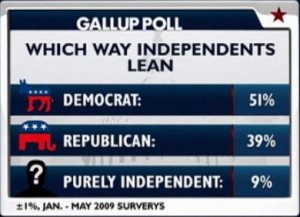 Already this is a big leap for the Democrats, but it actually gets bigger.  When they ask independents which way do you lean, 51% said Democratic, 39% said Republican.  So, if everybody is so conservative, why do the Democrats have such a huge advantage in these generic polls?  It is because people are actually not that conservative.

And if you are not convinced by the Democrat and Republican titles, you can say, hey that is also brand marketing in some way, and that is a fair point.  Well, let’s go to the issues themselves. 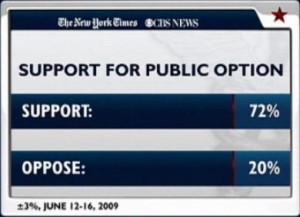 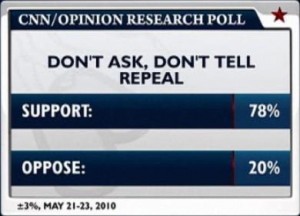 That’s just one issue, you say.  All right, let’s go to another one.  How about repeal of “don’t ask, don’t tell”?  Again, the Republicans fought it tooth and nail, the conservatives were dead set against it.  78% of the country wanted that to be repealed.  How liberal is this country when you go issue by issue? 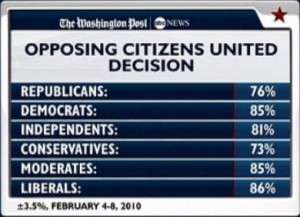 Let’s go to a third issue, the Citizens United ruling allowing unlimited spending in politics.  The idea of reforming the spending in our politics is considered to be generally a liberal ideal, though everyone should agree with it, if you ask me, and it turns out, in fact, everybody does agree with it.  80% of the country hated the Citizens United ruling.  They didn’t want it and what they want is reform in campaign financing because they know that our politicians are bought. 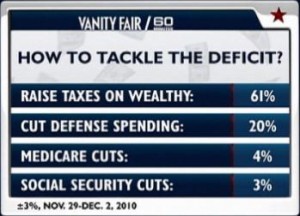 This is a progressive country when you look at all the issues.  We do not want to go in the direction of cutting these programs any longer.  What we want to do is a sensible balancing of the budget with everyone sharing the sacrifice, including the rich.

The progressive agenda—the public option, campaign finance reform, balancing the budget—ultimately takes away the profitability of the health care, banking and other industries that control the politicians.  So this ultimately isn’t a conservative issue in that sense.  It is money versus nonmoney, money versus people.  Unfortunately, money has completely bought the Republican party.  They are a wholly owned subsidiary.   The Democrats are only a little better.

William Brighenti is a Certified Public Accountant, Certified QuickBooks ProAdvisor, and Certified Business Valuation Analyst. Bill began his career in public accounting in 1979. Since then he has worked at various public accounting firms throughout Connecticut. Bill received a Master of Science in Professional Accounting degree from the University of Hartford, after attending the University of Connecticut and Central Connecticut State University for his Bachelor of Arts and Master of Arts degrees. He subsequently attended Purdue University for doctoral studies in Accounting and Quantitative Methods in Business. Bill has instructed graduate and undergraduate courses in Accounting, Auditing, and other subjects at the University of Hartford, Central Connecticut State University, Hartford State Technical College, and Purdue University. He also taught GMAT and CPA Exam Review Classes at the Stanley H. Kaplan Educational Center and at Person-Wolinsky, and is certified to teach trade-related subjects at Connecticut Vocational Technical Schools. His articles on tax and accounting have been published in several professional journals throughout the country as well as on several accounting websites. William was born and raised in New Britain, Connecticut, and served on the City's Board of Finance and Taxation as well as its City Plan Commission. In addition to the blog, Accounting and Taxes Simplified, Bill writes a blog, "The Barefoot Accountant", for the Accounting Web, a Sift Media publication.
View all posts by William Brighenti →
This entry was posted in Accountants CPA Hartford, Articles and tagged Americans are liberal, liberal is not a dirty word, Republicans made liberal a dirty word. Bookmark the permalink.

4 Responses to “Liberal” is not a dirty word