The President’s State of the Union, as always, is just a lot of talk

Posted on January 27, 2011 by William Brighenti 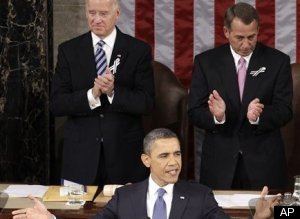 Another State of the Union and another President who says that he’s going to stop spending.

Obama:  “I’m proposing starting this year that we freeze annual domestic spending for the next five years.”

Is this possible?  Let’s look at the numbers.

The Federal government is expected to spend next year $3.83 trillion.

But next year the Federal government is expected to take in from taxes, revenues, and fees only $2.57 trillion.

So just freezing spending is not going to deal with the $1.26 trillion Federal budget deficit.

Obviously freezing spending won’t do it alone.  The President and Congress will have to cut.  The question is where?

The Federal budget is as follows:

All the cuts that President Obama is talking about only comes from the 19% of discretionary spending.  61% of the budget is made up of defense, social security, and medicare.  The only way to cut the budget is from that area.  But the President said that he won’t cut defense.  And as far as social security and medicare goes, he said that he will set up another commission to study it.

In the mean time, this is what Obama wants to spend more money on:

That all sounds great, but if you’re freezing spending, how do you pay for all of that?

To help pay for that, he’s asking Congress to eliminate the billions of taxpayer dollars we currently give to oil companies.

Actually that’s a great idea, but that would only be a start, and it’s been tried before and both Democrats and Republicans in Congress have rejected that.

You need to cut defense and really deal with social security and medicare.  Otherwise, the State of the Union, as always, is just a lot of talk.

William Brighenti is a Certified Public Accountant, Certified QuickBooks ProAdvisor, and Certified Business Valuation Analyst. Bill began his career in public accounting in 1979. Since then he has worked at various public accounting firms throughout Connecticut. Bill received a Master of Science in Professional Accounting degree from the University of Hartford, after attending the University of Connecticut and Central Connecticut State University for his Bachelor of Arts and Master of Arts degrees. He subsequently attended Purdue University for doctoral studies in Accounting and Quantitative Methods in Business. Bill has instructed graduate and undergraduate courses in Accounting, Auditing, and other subjects at the University of Hartford, Central Connecticut State University, Hartford State Technical College, and Purdue University. He also taught GMAT and CPA Exam Review Classes at the Stanley H. Kaplan Educational Center and at Person-Wolinsky, and is certified to teach trade-related subjects at Connecticut Vocational Technical Schools. His articles on tax and accounting have been published in several professional journals throughout the country as well as on several accounting websites. William was born and raised in New Britain, Connecticut, and served on the City's Board of Finance and Taxation as well as its City Plan Commission. In addition to the blog, Accounting and Taxes Simplified, Bill writes a blog, "The Barefoot Accountant", for the Accounting Web, a Sift Media publication.
View all posts by William Brighenti →
This entry was posted in Articles and tagged President Obama's State of the Union Address. Bookmark the permalink.