Posted on December 13, 2010 by William Brighenti 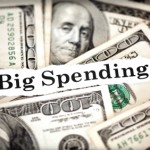 But isn’t amassing $15 trillion of national debt not conservative?  I am for a balanced budget amendment.  I am for reducing spending:  get me a machete and I’ll cut the United States budget so we would have no deficit.

I was against spending trillions of dollars after 9/11 attacking Iraq, looking for fictitious weapons of mass destruction, and invading Afghanistan, still looking for Osama Been Forgotten.  I am a fiscal conservative and do not believe in building prisons in Iraq where there are no prisoners, and making Haliburton wealthy.

But I am also opposed to our government paying unmarried women $734/month for each illegitimate child.  I witnessed an unmarried woman with seven children under 18 years of age receiving ~$7,000/month in welfare.  This particular woman was not married, and had 8 children by several different men, and never held a job.  Is this being responsible?  Should our government “reward” such behavior?  No wonder our government is in hock for trillions!

I have also witnessed the warehousing of unfortunate souls, incapable of caring for themselves because of mental illnesses and drug problems, costing Medicaid $235/day for each resident.  In Connecticut, these large nursing home syndicates are receiving billions of dollars every year from taxpayers.  It makes me want to open a warehouse and call it a nursing home.

Also I oppose the unlimited power of bureaucrats.  In many cities municipal employees receive enviable salaries as well as enviable medical and retirement benefits, without any threat of losing their jobs.  I recall a union for firemen having a municipal employment contract requiring the city (a small city by definition) to fund the salaries of ~158 firemen, even though there were only ~139 employed firemen, resulting in lots of overtime, around two to three million dollars in overtime compensation each year.  The city was restricted from laying off these excess firemen; if it went to arbitration, the union would win.  Similarly, so it was with this city’s police department employees’ union.  Furthermore, the medical benefits were costing the city ~$20,000 for each employee with a family.  And the retirement plan was a defined benefit plan, to boot.

Also in this same small city, the median salaries of teachers was ~$80,000/year, even though they worked ~183 days per year, and accumulated a generous amount of vacation/comp time.  The superintendent earned ~$155,000/year; and she had a number of assistant superintendents earning ~$130,000/year.  And then there were the principals earning ~$110,000/year to ~$120,000/year, and assistant principals earning ~$100,000/year.  No wonder property taxes in municipalities are skyrocketing.   In this city’s budget, education alone consumed nearly 70% of the municipal budget.  Some special education classes had only a few students, if not just one solitary student, often due to the unfunded mandates of Bush’s “No Child Left Behind” program.

Our government is on a drunken spending spree.  It refuses to control spending.  So the question is, until the populace gets angry and united enough to demand a balanced budget, do we keep increasing our national debt by extending tax cuts that do not balance our budget, or do we pay enough in taxes to avoid further debt?  Do we as a nation risk going into receivership?  Do we risk having our dollar being further devalued?  What’s worse:  paying more in taxes or having a dollar worth a pittance of what it once was?  And what is more conservative?  Risking insolvency or avoiding deficits?

I advocate controlling spending; however, that will never happen in this country, short of a revolution.  Why would our government exercise fiscal responsibility when the average person in our country is financially irresponsible?  The average citizen spends more than they earn.  So why would they expect or demand restraint on the part of government?

I believe that it is more fiscally conservative to avoid further debt than to extend unrealistic tax cuts.

I was once a registered Republican.  But after witnessing all of the recent Republican Presidents lacking the courage to lead by presenting a balanced budget, I registered as an independent voter.  I am tired of irresponsible Presidents and Congresspeople.

If only a balanced budget or a line-item veto amendment could be implemented…but it will never happen in the forseeable future.  And neither will control over spending, until we are forced into receivership…get real!  So our choice for the time being is the following:  more debt vs. more taxes.  Haven’t we all been taught that less debt is more conservative?

William Brighenti is a Certified Public Accountant, Certified QuickBooks ProAdvisor, and Certified Business Valuation Analyst. Bill began his career in public accounting in 1979. Since then he has worked at various public accounting firms throughout Connecticut. Bill received a Master of Science in Professional Accounting degree from the University of Hartford, after attending the University of Connecticut and Central Connecticut State University for his Bachelor of Arts and Master of Arts degrees. He subsequently attended Purdue University for doctoral studies in Accounting and Quantitative Methods in Business. Bill has instructed graduate and undergraduate courses in Accounting, Auditing, and other subjects at the University of Hartford, Central Connecticut State University, Hartford State Technical College, and Purdue University. He also taught GMAT and CPA Exam Review Classes at the Stanley H. Kaplan Educational Center and at Person-Wolinsky, and is certified to teach trade-related subjects at Connecticut Vocational Technical Schools. His articles on tax and accounting have been published in several professional journals throughout the country as well as on several accounting websites. William was born and raised in New Britain, Connecticut, and served on the City's Board of Finance and Taxation as well as its City Plan Commission. In addition to the blog, Accounting and Taxes Simplified, Bill writes a blog, "The Barefoot Accountant", for the Accounting Web, a Sift Media publication.
View all posts by William Brighenti →
This entry was posted in Accountants CPA Hartford, Articles and tagged more taxes or more debt, U.S. government spending taxes debt. Bookmark the permalink.