Posted on September 25, 2021 by William Brighenti 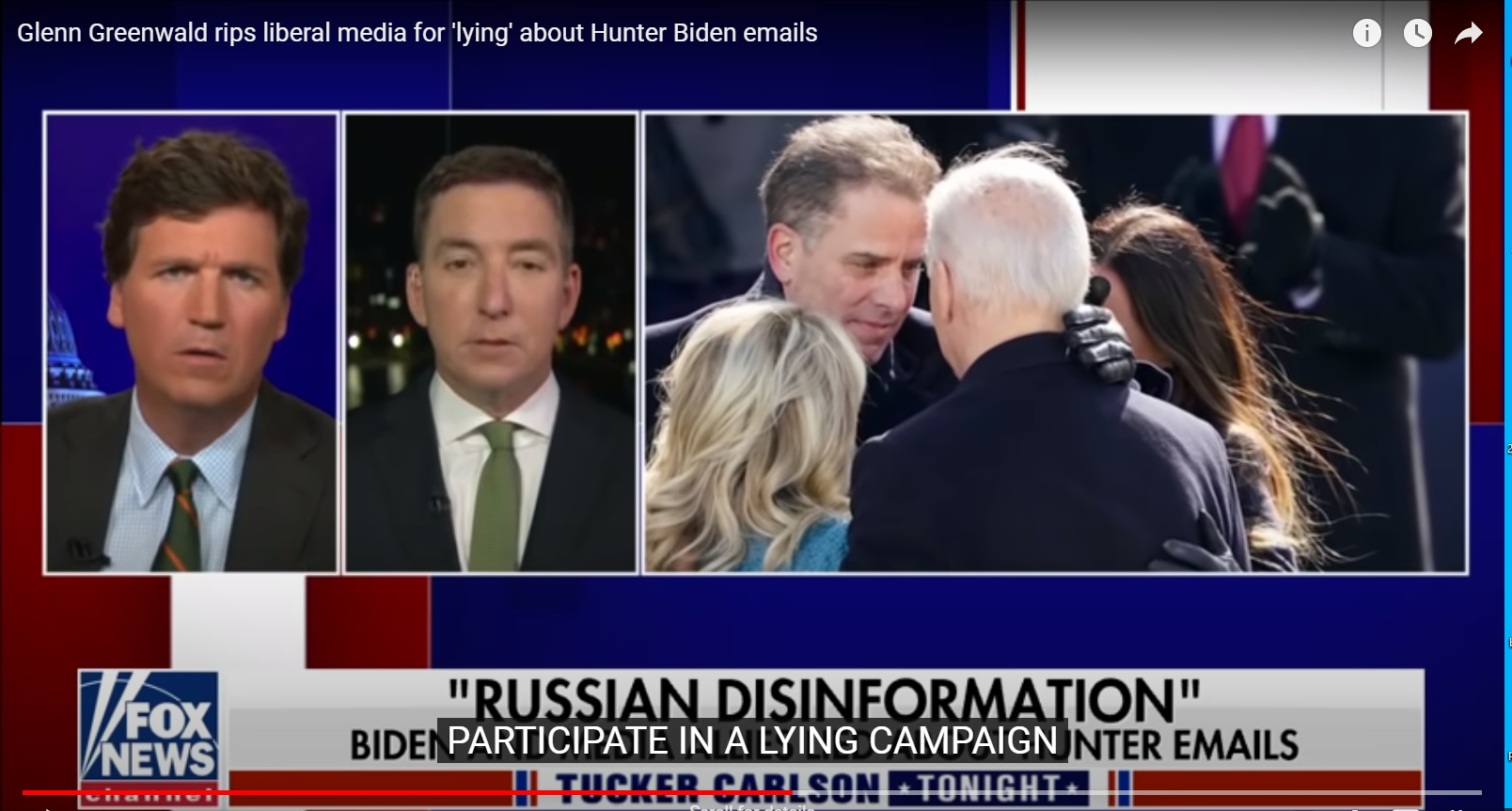 Well, a business insider reporting today that when Joe Biden was the Vice President, Hunter Biden sought a retainer of $2 million a year to help quote, “unfreeze” money that belonged to the Libyan government. If that’s true, that’s very serious.

You’ll remember that Hillary Clinton had Muammar Gaddafi, the head of Libya killed for reasons nobody ever explained, completely destroyed the country and the lives of people who live there, and then money from the Treasury was impounded.

If Hunter Biden was actually lobbying the U.S. government while his dad was Vice President to get that money, that’s a very big deal, it’s probably a crime.

Meanwhile, Ben Schreckinger of POLITICO is out with a book that confirms that Hunter Biden’s laptop is not fake, it’s not Russian disinformation, the laptop contains evidence that the Biden family was in fact selling access to Joe Biden to entities in China and Ukraine, and many other countries.

A year ago, POLITICO reported that the Intelligence Community thought the laptop was quote, “Russian disinformation.” Why are they telling us this now? Not that we ever believe their lies.

Glenn Greenwald is an independent journalist, very independent. He writes on “Substack.” He joins us tonight.

So Glenn, I mean, I don’t think you’re shocked by this, but you do have to ask it. Why are they telling us this now?

GLENN GREENWALD, JOURNALIST: The evidence was overwhelming from the very beginning, Tucker, that the e-mails were authentic, and yet they lied and lied and lied as you just showed trying to convince people to not even pay attention to them on the grounds that they were disinformation that the e- mails were fake.

Now, the new book that just came out is from this young reporter at POLITICO who spent months digging into all of these e-mails and obviously, he unearthed proof that these e-mails were forgeries and put that in his book, he would be a star. You would know his name, he’d be a household name, he’d be on every TV show.

But because his reporting that said the opposite, he found even more proof that all those e-mails were authentic, which meant that these media outlets, all of them pretty much, with a few exceptions deliberately lied to the public in the weeks before the election by telling them that this was Russian disinformation when they knew it wasn’t true. They are ignoring his book.

He is not a right-wing journalist, he is from one of those mainstream publications. He has the proof in his hands that they all lied and they don’t want anyone to know it.

CARLSON: Do you honestly think that they — if you’re NBC News, if you’re CNN, if you’re “The New York Times,” “The Washington Post,” can you just sort of move forward as if you didn’t participate in a lying campaign to influence a political election?

GREENWALD: You know, as you know, Tucker, I was at the media outlet that I founded when this all happened and they were the ones who published as well the claim that this was Russian disinformation and then a week later told me that I couldn’t report on this story because the documents weren’t verified in contrast to the C.I.A. lie that they had published.

So all throughout the media, this is their prevailing mindset. They know that they have an audience filled with liberals who hate Donald Trump and the Trump movement, and their only business model is to aggrandize those people. And they know that even if they lie and get caught lying, their audience and readers don’t care. In fact, like them even more, because they believe they’re on the right side.

So you have huge number of journalists who believe that, they have the right to lie and even when they get caught, they don’t care because they know their audience won’t hold it against them.

CARLSON: You came on, I think, immediately after you left “The Intercept” and I thought it was sad then, but looking back on it, the media outlet that you founded tried to make you lie or prevented you from telling the truth. I mean, that just really sums up the moment we’re living in.

I’m really sorry that you went through that. I just think it’s awful in every way, but you’re thriving, obviously.

William Brighenti is a Certified Public Accountant, Certified QuickBooks ProAdvisor, and Certified Business Valuation Analyst. Bill began his career in public accounting in 1979. Since then he has worked at various public accounting firms throughout Connecticut. Bill received a Master of Science in Professional Accounting degree from the University of Hartford, after attending the University of Connecticut and Central Connecticut State University for his Bachelor of Arts and Master of Arts degrees. He subsequently attended Purdue University for doctoral studies in Accounting and Quantitative Methods in Business. Bill has instructed graduate and undergraduate courses in Accounting, Auditing, and other subjects at the University of Hartford, Central Connecticut State University, Hartford State Technical College, and Purdue University. He also taught GMAT and CPA Exam Review Classes at the Stanley H. Kaplan Educational Center and at Person-Wolinsky, and is certified to teach trade-related subjects at Connecticut Vocational Technical Schools. His articles on tax and accounting have been published in several professional journals throughout the country as well as on several accounting websites. William was born and raised in New Britain, Connecticut, and served on the City's Board of Finance and Taxation as well as its City Plan Commission. In addition to the blog, Accounting and Taxes Simplified, Bill writes a blog, "The Barefoot Accountant", for the Accounting Web, a Sift Media publication.
View all posts by William Brighenti →
This entry was posted in Accountants CPA Hartford, Articles and tagged Ben Schreckinger, CIA, CNN, cpa-connecticut.com, Donald Trump, emails, Glenn Greenwald, Hillary Clinton, Hunter Biden, Intelligence Community, Joe Biden, laptop, liberals, Libya, Muammar Gaddafi, NBC News, New York Times, Politico, Russian disinformation, September 23 2021, So you have huge number of journalists who believe that they have the right to lie and even when they get caught they don't care because they know their audience won't hold it against them, Substack, the barefoot accountant, The Intercept, The media participated in a lying campaign to influence a political election, Tucker Carlson, Tucker Carlson Tonight, Washington Post, William Brighenti CPA. Bookmark the permalink.