Posted on September 4, 2021 by William Brighenti 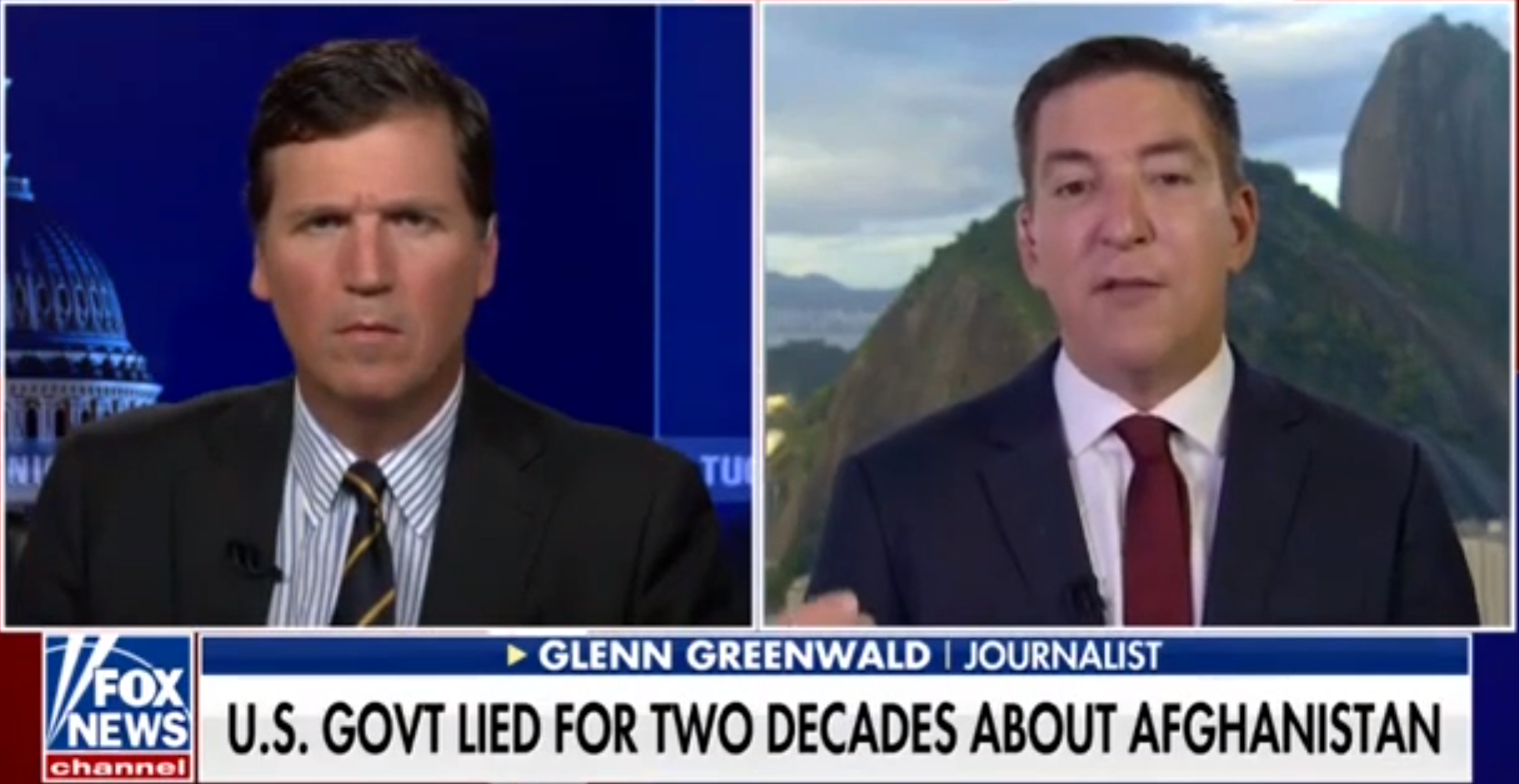 Carlson: So now we’re arming the Taliban and marooning our own citizens in Afghanistan. Who could possibly have seen that coming. Glenn Greenwald is one of the few journalists who did see it coming. He writes for Substack where all of us read him. You should, too. He joins us tonight. Glenn, thanks so much for coming on.

So it’s a little weird for the news organizations that repeated uncritically, and not just on the left, I hate to say it, but almost all of them just repeated these this kind of happy talk, about how Afghanistan was progressing for 20 years and then they whip around and are shocked that actually it’s a mess and always have been. There’s some dishonesty there, isn’t there?

Greenwald: The whole thing was a fraud. And you know, you can go back to things like in 2019, the Washington Post publishing what it called the Afghanistan papers, there’s now a book out by the reporter who broke that really important story, they did a good job on it, where they obtained secret documents going up to 2016 under the Obama years where internally they were saying the exact opposite of what they were saying publicly about the war in Afghanistan just like they did in Vietnam as revealed by the Pentagon Papers.

They were saying to the public, as you just showed, we’re making great progress, we have faith in the Afghan national security forces. Internally they knew the Afghan national security forces were a joke. They were filled with illiterate people who couldn’t do anything, with drug addicts, with people who had no interest in fighting: they would disappear as soon as they got their paycheck.

The whole war for years and years and years was a lie. And so while I do agree, of course, that there are ineptitudes in how we withdrew, the fact that we withdrew because two presidents, first President Trump and then President Biden, ensured that it happened, is something to celebrate in large part because it’s the first time in as long as I can remember as these people what I do know is the Deep State that manipulate us all the time, that lie to us all the time for their own benefit, have finally lost, and the media is turning against Biden, not because they suddenly became fair but because they’ve been in bed with the Deep State: that’s who fed them Russia-gate, that’s who fed them all the leaks during the Trump years.  And they’re angry on behalf of the faction that they genuinely serve.

Carlson: well I hate to say I agree with you. I mean I think Biden is an awful President, the worst I can remember, and totally out of it, senile. On the other hand, he’s the President of the United States. You’re not supposed to leak an audio tape of his recorded conversation with another Head of State. I mean that’s that’s a felony for one thing. And for another like how can any President do real diplomacy if he’s being undermined by permanent Washington.  Like why shouldn’t we be worried about that?

Greenwald: You know I think this is the key point for me at least when I look at the Trump years. A lot of people obviously ask me why weren’t you as worried as other people on, you know, the left about the Trump presidency. And my reason was because what I saw in opposition to the Trump presidency was something far more dangerous than anything that I thought he would be capable of doing. Which is that they took their masks off. They made clear the CIA, the Pentagon, the permanent military and Security State inside the United States that they were willing to intervene in US politics to undermine
the elected President.

The very first article I wrote before Trump was even inaugurated in January 17, 2017 was headlined, “the Deep State Goes to War with the Elected President.” The fact that we have a Deep State, that the US media was cheering, they were thrilled that these generals they were heralding as heroes for ignoring Trump’s orders, for keeping classified information away from him, for manipulating him, for subverting his decisions, they were cheering these generals as saving us from our elected leader, which is the definition of a Deep State at the same time as they were calling anyone who was pointing out that we have a Deep State unhinged, crazy, conspiracy theorist. That to me is the most dangerous development of the last five years is that unelected generals, intelligence operatives, arrogated into themselves, while the media cheered, the power to override our democracy whenever they thought that it was in our best interest to do so.

Carlson: And that leaves the entire population powerless. You know, your vote doesn’t matter, and that makes the society super volatile and dangerous. And I agree with you 100%. I used to laugh at the term the Deep State but it’s totally real unfortunately. Glenn Greenwald, I appreciate your coming on today. Thank you.

Greenwald: Good to be with you Tucker. Thanks.

William Brighenti is a Certified Public Accountant, Certified QuickBooks ProAdvisor, and Certified Business Valuation Analyst. Bill began his career in public accounting in 1979. Since then he has worked at various public accounting firms throughout Connecticut. Bill received a Master of Science in Professional Accounting degree from the University of Hartford, after attending the University of Connecticut and Central Connecticut State University for his Bachelor of Arts and Master of Arts degrees. He subsequently attended Purdue University for doctoral studies in Accounting and Quantitative Methods in Business. Bill has instructed graduate and undergraduate courses in Accounting, Auditing, and other subjects at the University of Hartford, Central Connecticut State University, Hartford State Technical College, and Purdue University. He also taught GMAT and CPA Exam Review Classes at the Stanley H. Kaplan Educational Center and at Person-Wolinsky, and is certified to teach trade-related subjects at Connecticut Vocational Technical Schools. His articles on tax and accounting have been published in several professional journals throughout the country as well as on several accounting websites. William was born and raised in New Britain, Connecticut, and served on the City's Board of Finance and Taxation as well as its City Plan Commission. In addition to the blog, Accounting and Taxes Simplified, Bill writes a blog, "The Barefoot Accountant", for the Accounting Web, a Sift Media publication.
View all posts by William Brighenti →
This entry was posted in Accountants CPA Hartford, Articles and tagged CIA, deep state, Glenn Greenwald, intervene in US Politics, Pentagon, permanent military, President Donald Trump, security state, The Deep State intervened in US politics to undermine the elected President Donald Trump, Tucker Carlson Tonight 9/3/2020, undermine the elected President, “the Deep State Goes to War with the Elected President”. Bookmark the permalink.