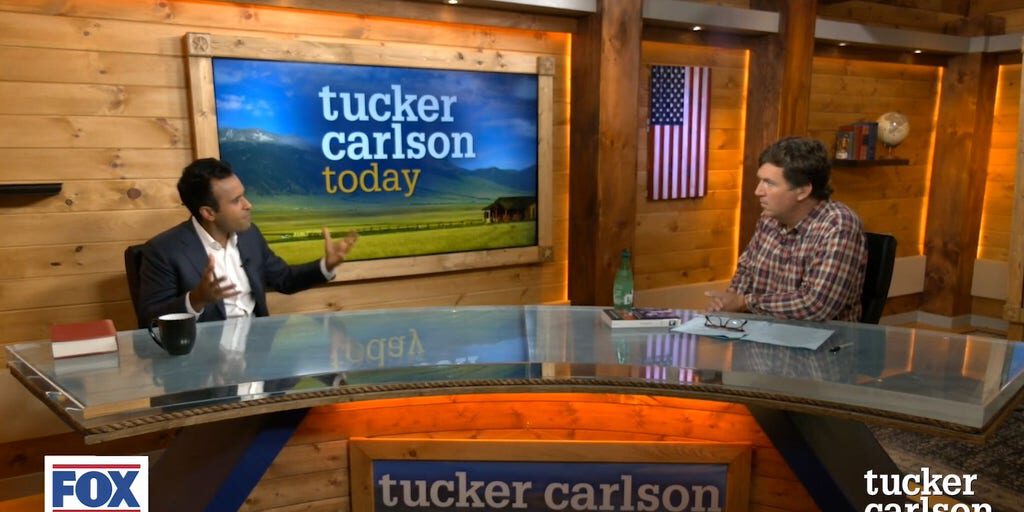 Vivek Ramaswamy: When I think about the health of a democracy, really any democracy but especially American democracy, it’s really simple. It is the percentage of people who are willing to say what they actually believe in public. And right now we are doing abysmally on that metric.

And when I reflect on it, first personally as a human being, I wasn’t free to say what I actually believed as CEO. That’s why I had to separate my voice from my company. But now I am a citizen and I’m not going to mince words about what I think we need to do about the cultural epidemic that we’re that we’re facing as a people.

What you have is a bunch of people in my generation, a bunch of woke millennials get together with a bunch of big banks, together they birth woke capitalism. And then they put Occupy Wall Street up for adoption, and that’s really when wokeness met capitalism, that’s when it went from a fringe theory in the academy to becoming supercharged with the potency of capitalism.

And when it mixed with capitalism, that’s when wokeness became….

Tucker Carlson: Talk about an axis of evil. I mean this might be the ugliest most dangerous alliance in American history. I can’t think of anything more destructive than what you just described.

Tucker Carlson: Can we skip to the part where they eat each other and we enjoy it.

Vivek Ramaswamy: Well there’s a part that comes in between them, which is where this, uh, this bilateral arranged marriage actually turns into what I call a threesome, which is the Communist Party of China getting in on the act, right? So they see what’s going on here with this arranged marriage and they say, okay, this is actually an opportunity and the opportunity is this: if we can get those companies to criticize the United States in the United States but stay silent about our actual human rights abuses here in China, we can do the thing that we could have never done with our nuclear arsenal, and that is to undermine the moral standing of the United States on the global stage. So they got in on this act.

There’s a Chinese word for wokeness as you well know: baizuo, which literally refers to all
white people, they used to laugh at us, but it’s not just a joke. They are now using that as a
geopolitical tool to say, oh, Nike and Disney and the NBA and Marriott, you want to criticize the United States, have at it. If you criticize China, we’re going to build a great Chinese wall and you can’t enter our market. But if you criticize the United States, we’re going to roll out the red carpet to you.

And by the way if you’re airbnb, we’re going to roll out the red carpet if and only if you give us the consumer data that you gathered from your progressive consumers who love it when you post a black square on Instagram, a condition for airbnb’s entry to China. That’s a little little-known secret that the Wall Street Journal reported on last year.

But that’s how this game is played.

Vivek Ramaswamy: It it makes my blood boil.

Tucker Carlson: I know all this. I don’t think I’ve ever heard it as clearly explained as you just did.

Vivek Ramaswamy: Well I spent a year and a half thinking about it for the book so I better be able to tell you a little something about it. But it is maddening to watch the way in which they’re playing us like a Chinese mandolin. And it is working. And the way they’ve done it is they have turned these corporations into Trojan horses that undermine the United States from within because they are now the new international arbiters of moral justice.

But for China they get something out of that trade, back to that mutual prostitution. It’s now a three-way prostitution where China is able to get something out of it, which is the people who are known to criticize injustice, never criticize injustice over here. That creates this false equivalence between Chinese nihilism and American idealism, and when that happens, Chinese nihilism wins every time. Thank you Lebron James, thank you Disney, thank you NBA. That’s the world that we live in.

And it’s really hard to know what to do about it when we have spent the last 40 years defending the castle of capitalism from the front door without recognizing that that castle was invaded through the back door from woke activists to the Chinese Communist Party. And I think the defining challenge for us as Americans today is how do we actually sterilize that castle without burning the whole thing down.

William Brighenti is a Certified Public Accountant, Certified QuickBooks ProAdvisor, and Certified Business Valuation Analyst. Bill began his career in public accounting in 1979. Since then he has worked at various public accounting firms throughout Connecticut. Bill received a Master of Science in Professional Accounting degree from the University of Hartford, after attending the University of Connecticut and Central Connecticut State University for his Bachelor of Arts and Master of Arts degrees. He subsequently attended Purdue University for doctoral studies in Accounting and Quantitative Methods in Business. Bill has instructed graduate and undergraduate courses in Accounting, Auditing, and other subjects at the University of Hartford, Central Connecticut State University, Hartford State Technical College, and Purdue University. He also taught GMAT and CPA Exam Review Classes at the Stanley H. Kaplan Educational Center and at Person-Wolinsky, and is certified to teach trade-related subjects at Connecticut Vocational Technical Schools. His articles on tax and accounting have been published in several professional journals throughout the country as well as on several accounting websites. William was born and raised in New Britain, Connecticut, and served on the City's Board of Finance and Taxation as well as its City Plan Commission. In addition to the blog, Accounting and Taxes Simplified, Bill writes a blog, "The Barefoot Accountant", for the Accounting Web, a Sift Media publication.
View all posts by William Brighenti →
This entry was posted in Accountants CPA Hartford, Articles and tagged baizuo, big business, big government, China, Chinese nihilism, Communist Party of china, cpa president of united states, cpa-connecticut.com, Disney, Marriott, NBA, Nike, occupy wall street, The new fascism is the woke industrial complex consisting of big US corporations and the big governments of China and the United States, Tucker Carlson, United States, Uyhur human rights crisis, Vivek Ramaswamy, WOKE INC, woke industrial complex, wokeness, Xi Jinping. Bookmark the permalink.