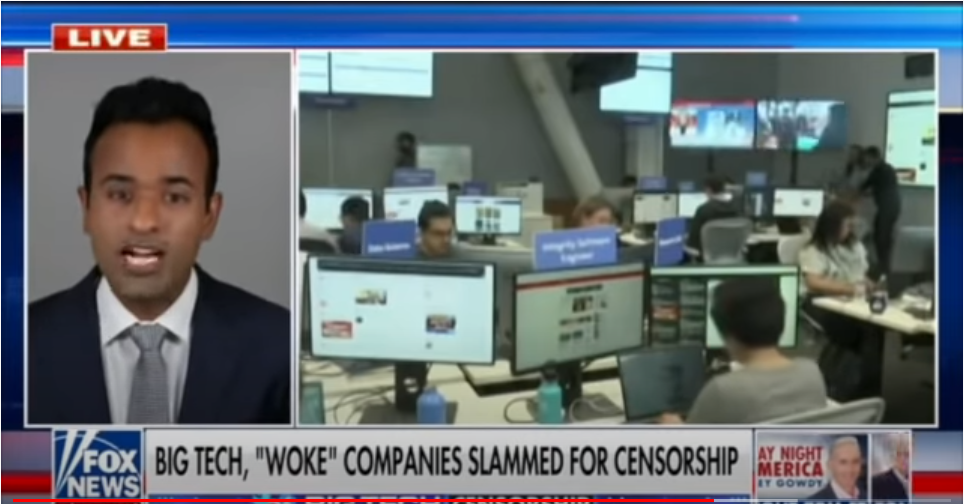 Vivek Murthy: But what I’ve also said to them publicly and privately is that it’s not enough. That we are still seeing a proliferation of misinformation online. And we know that health misinformation harms people’s health. It costs them their lives.”

Jon Scott: Our next guest recently argued in a Wall Street Journal op-ed quote: “Google, Facebook and Twitter should be treated as state actors under existing legal doctrines. Using a combination of statutory inducements and regulatory threats, Congress has co-opted Silicon Valley to do through the back door what government cannot directly accomplish under the Constitution”

The author of those words, Vivek Ramaswamy. He is a biotech entrepreneur and the author of “Woke Inc.: Inside Corporate America’s Social Justice Scam.” Uh, to the subtitle of the book first, Vivek, what do you mean “social justice scam”?

Vivek Ramaswamy: Yeah well look, what I mean is that companies use the illusion of caring about something other than the pursuit of profit and power precisely to gain more profit and power. That is how the game of 21st century capitalism is played. It dupes consumers it dupes regulators, and it dupes the public at large to allow companies to accomplish their own objective but leave the American citizenry worse off in the end.

Jon Scott: Well, is Facebook an example for instance of that kind of thinking?

Vivek Ramaswamy: Yeah, Facebook is an example of it. I would put all of social media in this category, too, where there is an effective unspoken backroom deal with progressives in the Democratic Party to say that we are going to now use our corporate power as a weapon to silence content that you disagree with. But effectively we in Silicon Valley don’t do it for free. We expect you, the government, to look the other way when it comes to leaving our monopoly power intact. And I’m sorry to say that it is working masterfully for both sides.

Jon Scott: Okay but you just heard the Surgeon General say that misinformation on outlets like Facebook is costing people their lives. We want to save lives, don’t we?

Vivek Ramaswamy: Of course we do. But look, I think the answer to misinformation and to bad speech is not less speech, it is more speech. And I think there’s both a cultural point and a legal point.

But the good news is we have strong legal doctrines in this country which say that even if you deputize a private company to do what the government can’t do. that is still a violation of the Constitution. And that’s why I argued that these companies ought to be treated as state actors and bound by the First Amendment when they engage in selective political censorship. And I think that’s what President Trump’s case has the potential to do by the way.

Jon Scott: The spokeswoman for the current President, Jen Psaki, was talking about the fact that the

Biden administration has been leaning on Facebook to silence what she calls misinformation. Senator Ted Cruz says that her point actually helped former President Trump. Listen.

Ted Cruz: Her press conference strengthened President Trump’s lawsuit against big tech. It makes clear that everything we thought about the Biden administration, about their willingness to trample on free speech, to trample on the Constitution, to use government power to silence you, everything we feared they might do, they are doing, and worse.

Jon Scott: Is he accurate in that assessment?

Vivek Ramaswamy: Senator Cruz and I actually exchanged messages after my op-ed came out on Monday. He’s absolutely right. I think that’s exactly the point I made in my op-ed on Monday. When I wrote on Monday that the government was using these companies through the back door to do what it couldn’t do directly, people said that was a conspiracy theory. Well apparently the difference between a conspiracy theory and reality today is as short as four days because we just saw Jen Psaki on Thursday and then on Friday bragging, boasting, about exactly what the government was directing Facebook to do in taking down misinformation, saying that if you were banned from one social media company, you should be banned from all of the social media platforms.

And so she is now making the case for state action even better than I did in my couple of Wall Street Journal editorials. But the point is the government today is boasting about using social media companies to effectuate its objectives. That is actually the biggest violation of the Constitution of all and I think that’s the case that President Trump is effectively trying to make. I think he has room to make it better in the complaint that he’s filed but that’s effectively the heart of his claim is that when the government dispatches private companies with threats, with voluntary willful coordination between the government and these private companies, and also with the special form of immunity in the form of Section 230 immunity, any one of those could be the basis for state action using Supreme Court doctrines. Here we have all three.  I think it may be the most egregious case of state action in the guise of private enterprise that we’ve seen in modern history.

Jon Scott: Okay, very quickly, but on a micro level, I mean there are millions of people watching right now, who are also Facebook users, what do you say to them about your concerns about the government leaning on that company?

Vivek Ramaswamy: If it can happen to the 45th president of the United States it can happen to anybody. This is not an academic issue and it is not a political or partisan issue. If they can do it to the right today, they can do it to the left tomorrow. These are the most powerful companies we’ve seen in the course of human history.  Even the Dutch East India Company had a private militia but it couldn’t control the bounds of acceptable debate.

And it’s not just the power of these companies alone that matters. When it’s co-mingled with the state, when big business mixes with big government, that creates the biggest threat of all, what I call the woke industrial complex, because each of big business and big government can do what the other cannot and that’s a threat to liberty whether you’re a Republican or whether you’re Democrat, whether you’re black or white, every American ought to be concerned. And I think that’s where the new solutions for both the movements on the left and on the right need to focus going forward.

William Brighenti is a Certified Public Accountant, Certified QuickBooks ProAdvisor, and Certified Business Valuation Analyst. Bill began his career in public accounting in 1979. Since then he has worked at various public accounting firms throughout Connecticut. Bill received a Master of Science in Professional Accounting degree from the University of Hartford, after attending the University of Connecticut and Central Connecticut State University for his Bachelor of Arts and Master of Arts degrees. He subsequently attended Purdue University for doctoral studies in Accounting and Quantitative Methods in Business. Bill has instructed graduate and undergraduate courses in Accounting, Auditing, and other subjects at the University of Hartford, Central Connecticut State University, Hartford State Technical College, and Purdue University. He also taught GMAT and CPA Exam Review Classes at the Stanley H. Kaplan Educational Center and at Person-Wolinsky, and is certified to teach trade-related subjects at Connecticut Vocational Technical Schools. His articles on tax and accounting have been published in several professional journals throughout the country as well as on several accounting websites. William was born and raised in New Britain, Connecticut, and served on the City's Board of Finance and Taxation as well as its City Plan Commission. In addition to the blog, Accounting and Taxes Simplified, Bill writes a blog, "The Barefoot Accountant", for the Accounting Web, a Sift Media publication.
View all posts by William Brighenti →
This entry was posted in Accountants CPA Hartford, Articles and tagged Accountants CPA Hartford Connecticut LLC, barefootaccountant, Biden administration, Big Tech, censorship, Constitution, Democratic Party, Facebook, first amendment, free speech, Jen Psaki, Jon Scott, July 18 2021, Our government is using Big Tech companies to circumvent the First Amendment and censor free speech on its behalf, Vivek Ramaswamy, william brighenti, Woke Inc.: Inside Corporate America's Social Justice Scam. Bookmark the permalink.