Glenn Greenwald says the corruption in the U.S. News Media is absolutely pervasive

Posted on October 22, 2020 by William Brighenti 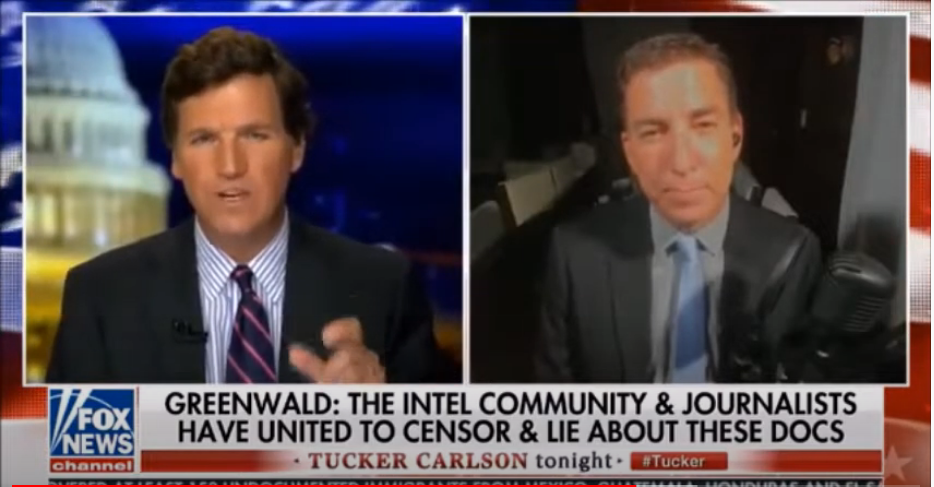 Tucker Carlson: Joe Biden emerged to speak to a local news station in Milwaukee. I haven’t heard much from him recently. He said virtually nothing about that New York post series about his son’s laptop and the emails on it that suggest Hunter Biden profited, and perhaps his father profited, from changes to American foreign policy.

Anyway here was Biden’s response to the story:

Joe Biden: “This is the same garbage, Rudy Giuliani, Trump’s henchmen. It’s the last ditch effort in this desperate campaign to smear me and my family. And the vast majority of the intelligence people have come out and said there’s no basis at all.”

Tucker Carlson: Okay. Well, you know, he doesn’t say, he never says that the laptop or the emails and texts on it are fake. He does point to the intelligence people. He’s talking about a letter written by partisan former intel officials, who’ve admitted they don’t know anything about the laptop because they haven’t seen it. So don’t listen to the current Director of National Intelligence, Joe Biden says. Listen to John Brennan on MSNBC.

But the weirdest part of the clip is that Joe Biden denied that his son ever profited from his connections to Joe Biden even though Hunter Biden has admitted that, in fact, on camera.

ABC Interviewer: “You didn’t have any extensive knowledge about natural gas or Ukraine itself though.

Hunter Biden: “Uh, no, but I think that I had as much knowledge as anybody else that was on the Board, if not more.”

ABC Interviewer: “In the list that you gave me the reasons why you’re on that Board, you did not list the fact that you were the son of the Vice President. What role do you think that played?”

Hunter Biden: “I think that it is impossible for me to be on any of the Boards that I just mentioned without saying that I’m the son of the Vice President of the United States.”

Tucker Carlson: Okay, so the truth is this kind of garbage is ubiquitous in Washington. It’s how the entire private sector of the city makes its living. It’s how people pay their mortgages and send their kids to private school. This is what Washington does. It’s not an excuse. It’s just the truth.

So maybe if the Biden campaign admitted that, they’d be able to get past the story. But they’re not. They’re lying about it. So what do we make of that?

Glenn Greenwald is the co-founder of the Intercept, who joins us tonight. Glenn, thanks so much for coming on. Where do you think the story is right now? What do you make of it?

Glenn Greenwald: “Well the problem with the story is that, not that Joe Biden isn’t answering questions because that’s what a Presidential candidate would do if he’s not forced to, which is just simply evade questions that are being posed to him.

The problem is the corruption that is absolutely pervasive in the U.S. news media. There are newsrooms all throughout New York and Washington DC, where top editors are explicitly saying they do not want this story investigated. And they’re being clear that the reason that they don’t want to investigate it is because they think even if there’s corruption that’s exposed here, in their view Trump is worse. And therefore it would be malfeasance on the part of the media to report corruption on the part of Biden when Trump is so much more corrupt.

What they’re really saying is they see their role as journalists not as informing the public, to let the public decide which candidate is better and which is worse. They see journalism, the function of it is to defeat Donald Trump and elect Joe Biden.

So many basic questions, Tucker, that journalists should be demanding Joe Biden to answer. Are the emails authentic? Do you claim that any of them have been fraudulently altered or fabricated? Did your son actually drop off that laptop in the Delaware repair store? Did you ever discuss with him meeting with Burisma executives or, in fact, meet with Burisma executives? Why was the prosecutor that you accepted as the replacement for the one you demand to be fired somebody who had no experience as a prosecutor or was himself imprisoned for embezzlement, was a lackey of the Ukrainian President? Why was somebody like that acceptable to you if the goal is, you claim, was good government in Ukraine as opposed to benefiting Burisma?

Maybe these are good answers to those questions, but he’s not answering them because the media has said you don’t have to.”

Glenn Greenwald: “Well, I mean, there are things that that are suggested strongly by these emails that we ought to know the answers to. Biden has always said he never acted on behalf of Hunter Biden or Burisma but these emails suggest the opposite that he actually did in fact meet with Burisma executives at Hunter’s request, which is why there’s an email thanking Hunter for the opportunity to meet with his father. Is that true? Did he meet with those executives?

There are emails that are suggestive of the fact that Hunter gave part of his salary to the Vice President and negotiated deals in China that were intended to personally benefit Joe Biden. Remember when Biden was in government for 50 years, he never made much money. He was looking to get rich, which he did once he left the White House. Did he ever consummate those deals or discuss any of those deals with Hunter?

And again, to me, the key question that is provoked by a lot of these emails is if it was the case that there was a noble and benevolent motive in trying to get this Ukrainian prosecutor fired and it wasn’t to help Burisma but instead to clean out corruption, why did they release the funds after one of the most corrupt people in all of Ukraine was appointed to that position? What is Joe Biden’s answer to that? If we had a working press, we would know it.”

Tucker Carlson: That’s exactly right. And thank you for always directing the conversation back to the foreign policy part of this, which is the most outrageous part of all. It’s been completely ignored except by you basically, and I think you’re exactly right about that. Glenn Greenwald, thank you.

Tucker Carlson: Why is the Vice President United States firing a prosecutor in the Ukraine? How does that help our country. It doesn’t, of course.

William Brighenti is a Certified Public Accountant, Certified QuickBooks ProAdvisor, and Certified Business Valuation Analyst. Bill began his career in public accounting in 1979. Since then he has worked at various public accounting firms throughout Connecticut. Bill received a Master of Science in Professional Accounting degree from the University of Hartford, after attending the University of Connecticut and Central Connecticut State University for his Bachelor of Arts and Master of Arts degrees. He subsequently attended Purdue University for doctoral studies in Accounting and Quantitative Methods in Business. Bill has instructed graduate and undergraduate courses in Accounting, Auditing, and other subjects at the University of Hartford, Central Connecticut State University, Hartford State Technical College, and Purdue University. He also taught GMAT and CPA Exam Review Classes at the Stanley H. Kaplan Educational Center and at Person-Wolinsky, and is certified to teach trade-related subjects at Connecticut Vocational Technical Schools. His articles on tax and accounting have been published in several professional journals throughout the country as well as on several accounting websites. William was born and raised in New Britain, Connecticut, and served on the City's Board of Finance and Taxation as well as its City Plan Commission. In addition to the blog, Accounting and Taxes Simplified, Bill writes a blog, "The Barefoot Accountant", for the Accounting Web, a Sift Media publication.
View all posts by William Brighenti →
This entry was posted in Accountants CPA Hartford, Articles and tagged Burisma, Donald Trump, Glenn Greenwald, Glenn Greenwald says the corruption in the U.S. News Media is absolutely pervasive, Glenn Greenwald says the U.S. news media is corrupt by refusing to investigate Biden's corruption, Hunter Biden, Joe Biden, journalist role, October 21 2020, prosecutor, Tucker Carlson, U.S. News Media corruption. Bookmark the permalink.