Liberals and their media are attacking absolute equality under the law 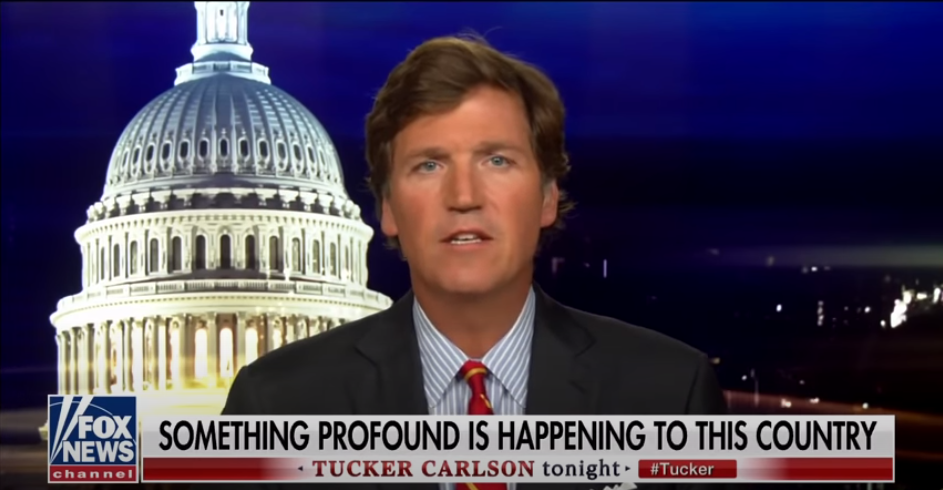 Fox News
If you’ve been paying attention recently, and you probably have, you’ve likely sensed that something profound is happening to this country right now, something that could transform what America is. You can feel it happening.

Our leaders deny it. Officials on both sides reassure us they’re not planning wholesale changes to the country. They’re just trying to fix specific problems.

A man was brutalized by police officers in Minneapolis. Another man was shot to death in the parking lot of Wendy’s. Those things were bad, they are telling us, and abuses like that are what they are fighting against.

They say we need new laws, more good faith, more attention to injustice, and that sounds right to most Americans. Americans are decent people. They want to do the right thing. Certainly, Republicans in Congress appear to believe all of this — or maybe they’re just so scared, they pretend they believe it.

Either way, just Wednesday, the GOP leadership enthusiastically backed a Law Enforcement Reform Bill. They’re proud of that. They seem to think that reining in the police will fix the underlying problems. And pretty soon, we can all get back to living in 2014 again. Republicans appear to believe this is a policy debate.

Is anyone in power defending absolute equality under the law? If there was ever a time to remind America that we all have equal value under God, that time is right now. But no. No one in charge is saying that. Our leaders are cowards when we need them to be brave. They are muddled when we need them to think clearly. It’s possible they no longer even believe in equality.

But Democrats know better than that; they don’t lie to themselves. They understand there is a revolution in progress. The death of George Floyd may have sparked widespread outrage — sincere outrage — and they may share that outrage. But they also know that what is happening now has very little to do with George Floyd or people like him. Like all revolutions, the point is to destroy the current system and replace it with something new.

Or replace it with what? That’s the question the rest of us should be asking right now. We should know what’s coming.

We know what we have now. Our current system has been in place for hundreds of years. It’s based on a very simple idea: All people are created by God with equal moral value. Period. Every one of them.

For that reason, and that reason alone, all Americans are treated equally under the laws of the United States. In this country, we judge you for what you do, not how you were born. That idea has been the defining principle of America since the 18th Century. It’s the main reason we are the fairest society in the world. It’s the reason people move here.

To the extent America has failed to live up to that principle of equality, we are ashamed of it — we should be. Equality is the most important thing we have. We should defend it. We should practice it.

Now for the first time in our history, we’re witnessing a broad and powerful attack on the principle of equality. Daily, we are told that all people are not in fact created equal. Some were born with moral stain, others were not. Some Americans are guilty, some are innocent. Nothing can change this because it was all determined at birth. All we can do is respond accordingly.

If that sounds familiar, it’s because this kind of system we just described — this system based on heredity and blood guilt — has been very common in history. It was the rule in feudal Europe, for example, and the totalitarian regimes on that continent more recently. It’s still in practice in parts of the world.

In North Korea, children are sent to prison camps for the sins of their ancestors. And unfortunately, we have seen it here, too. You may have wondered how politicians could have justified practices as perverse as slavery and Jim Crow in a country with a constitution like ours and the answer is simple — by arguing that not all people are created equal.

Some had lesser moral value from birth. That’s what they said. Those people carried the stain of sin with them. You are allowed to treat them differently based on who they were.

The promise of absolute equality under the law is all we have. Laws are designed to protect the weak, not the strong.

At the time, many understood that this was a lie. Slavery persisted for hundreds of years, but there were always some in authority who considered it evil. Not evil simply because it was abusive, which of course it was, but because the existence of it violated the central principle of this country. And they were right.

Where are those people now? Look around. Is anyone in power defending absolute equality under the law? If there was ever a time to remind America that we all have equal value under God, that time is right now. But no. No one in charge is saying that. Our leaders are cowards when we need them to be brave. They are muddled when we need them to think clearly. It’s possible they no longer even believe in equality.

Forty years ago, this was a middle-class country and as a result, America had strongly egalitarian values. Pretty much everyone used commercial airports and ate at McDonald’s. Do you remember that? People talked without irony about their rights as citizens and taxpayers.

You couldn’t pay extra to jump to the head of the line at Disney World. The idea that someone like Jeffrey Epstein could beat a sex charge because he was rich would have shocked us then. We would have demanded an investigation into just how Jeffrey Epstein died. Why? Because Americans hated corruption. They saw corruption as an offense against equality.

That was 40 years ago. Things were moving in the opposite direction ever since. We now accept, uncritically, the claim that some people deserve better treatment based on how they were born, and some deserve worse.

This is the most poisonous and the most destructive of all ideas. Other nations understand that. Rwanda has made it a crime to make ethnic appeals during elections — to practice identity politics — because they know very well where that leads.

Yet, identity politics is accelerating here. It shouldn’t surprise you that most of the people pushing this poison are benefiting from it. They’re using the recent chaos to codify dangerous trends already in progress, a permanently unequal society where some citizens are elevated and others are crushed. Winners and losers preordained by law. That’s the country they’re working toward.

At the same time — and this is always the tell — they lecture you with maximum self-righteousness about how they’re doing precisely the opposite of that. What they’re really doing, they claim, is upholding equality under the law. “No one is above the law,” they scold, meaning you aren’t.

You are not above their laws. You must obey those laws to the letter,or you will face certain punishment. Others, meanwhile, get a pass for an entirely separate set of laws. Revolutionaries don’t acknowledge universal standards. Increasingly, they admit this out loud. They’re not pretending anymore.

A couple of weeks ago, Gov. Andy Beshear of Kentucky announced plans to bring universal health insurance to his state, but not for all citizens, just for people with the right skin color. Everyone else would pay, but only certain ethnic groups would benefit.

Andy Beshear is still in office. No one has tried to impeach him for suggesting this because ideas like this are everywhere now. They’re totally unchallenged.

This is the most divisive possible way to run a country. If you wanted to make certain that your children would hate each other, you would hold them to different standards, and they certainly would. There is a reason that racial tension is rising in this country — it’s by design.

But race is not the only dividing line. The coronavirus lockdowns have nothing to do with race, with white or black, thank God. They’re probably the only thing in America right now that doesn’t. Quarantines are instead scientific. They’re purely a matter of public health. That’s what they told us and we believed them. We sat passively as they destroyed our country’s economy as they indicted Americans for trying to make a living.

And then the Black Lives Matter riots started, and we learned that it was all fake. The very same officials who threatened us with arrest for going outside urged their own voters to flood the streets. And they did, and no one was punished.

How could this happen? It was such a flagrant, double standard, not even hidden, right in your face. They didn’t try to explain it. They didn’t bother to justify it. Why?

Anyone familiar with totalitarianism regimes can tell you exactly why and what’s going on. This is ritual humiliation. Forcing people to accept mistreatment is a time-tested way to subdue them. Of course, we’re not treating you fairly, they’re telling us. You don’t deserve fairness. You deserve what you get. That’s the message.

And after awhile, the population accepts this. Some believe it. They blame themselves. That’s the goal. But we should never accept it. The promise of absolute equality under the law is all we have. Laws are designed to protect the weak, not the strong.

At the moment, the people leading this revolution against our system are strong. That’s why they’re trying to subvert our laws. If they succeed, there will be nothing to protect the rest of us in this country. We cannot let them do that.

In the United States of America, all of us are equal under the law. Period. Say that as loud as you can.

William Brighenti is a Certified Public Accountant, Certified QuickBooks ProAdvisor, and Certified Business Valuation Analyst. Bill began his career in public accounting in 1979. Since then he has worked at various public accounting firms throughout Connecticut. Bill received a Master of Science in Professional Accounting degree from the University of Hartford, after attending the University of Connecticut and Central Connecticut State University for his Bachelor of Arts and Master of Arts degrees. He subsequently attended Purdue University for doctoral studies in Accounting and Quantitative Methods in Business. Bill has instructed graduate and undergraduate courses in Accounting, Auditing, and other subjects at the University of Hartford, Central Connecticut State University, Hartford State Technical College, and Purdue University. He also taught GMAT and CPA Exam Review Classes at the Stanley H. Kaplan Educational Center and at Person-Wolinsky, and is certified to teach trade-related subjects at Connecticut Vocational Technical Schools. His articles on tax and accounting have been published in several professional journals throughout the country as well as on several accounting websites. William was born and raised in New Britain, Connecticut, and served on the City's Board of Finance and Taxation as well as its City Plan Commission. In addition to the blog, Accounting and Taxes Simplified, Bill writes a blog, "The Barefoot Accountant", for the Accounting Web, a Sift Media publication.
View all posts by William Brighenti →
This entry was posted in Accountants CPA Hartford, Articles and tagged Blood guilt, cpa-connecticut.com, equality is the most important thing we have, IS ANYONE EMPOWERED DEFENDING ABSOLUTE EQUALITY UNDER THE LAW, Is anyone in power defending absolute equality under the law, June 18 2020, Law Enforcement Reform Bill, Liberals and their media are attacking absolute equality under the law, system based on heredity and blood guilt, the barefoot accountant, there are increasingly two versions of the law, There are two versions of the law, There’s a reason racial tension is rising in America – it’s by design, Tucker Carlson, william brighenti. Bookmark the permalink.