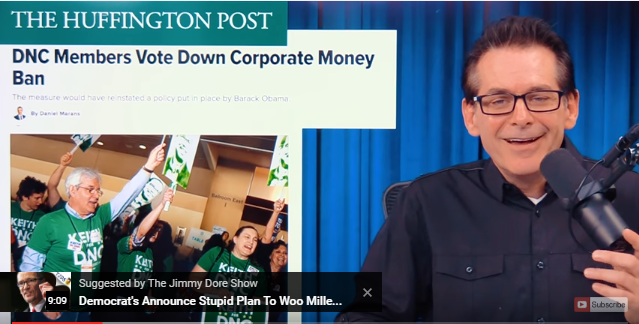 So what are we talking about today. So everybody has made a big deal about the DNC election and that they chose the corporatist and now they want the progressives to unify. No, how about you pick the progressive because you guys just lost.

In fact, impact the establishment Democrats are wiped out coast to coast. And you know that, you’ve heard me say a million times, they lost sixty-nine out of a hundred state houses; they lost the Congress; they lost the Senate; they lost to the most unpopular politician in the history of the world, Donald Trump, who only had a thirty-seven percent approval rating on the day he beat the Democrat.

One of the things that Barack Obama did was he instituted a rule: no corporate lobby money. Debbie Wasserman Schultz repealed it, and the Democrats are like, hey, since we got our ass handed to us by trying to be like just like Republicans by, you know, getting in bed with Wall Street and big business and the military-industrial complex and expanding two wars into seven, you know, we kind of turned into Republicans so maybe we should turn back into Democrats and let’s say we don’t take corporate money at the DNC.

Turns out DNC members voted down corporate money ban. That’s what they did. I think that was probably worse than choosing Tom Perez.

So the donors have a stranglehold on the Democratic Party and they’re not letting go. And they don’t give a shit. Remember the establishment Democrats would rather lose to a Republican than let a progressive win. I’m not making that up.

“Democratic National Committee members on Saturday [this is last Saturday] voted down a resolution that would have reinstated former President Barack Obama’s ban on corporate political action committee donations to the party. Resolution 33, introduced by DNC Vice Chair Christine Pelosi [she introduced it?— look at that ha] would also have forbidden ‘registered, federal corporate lobbyists’ from serving as ‘DNC chair-appointed, at-large members.'”

“Obama, as the party’s Presidential nominee in 2008, banned contributions from political action committees, as well as from lobbyists. Former DNC chair Debbie Wasserman Schultz quietly lifted the ban ahead of the 2016 election. Bob Mulholland, a DNC member from Chico, California, was one of the bill’s most vocal opponents and helped lead a successful effort to table the resolution for further review on Friday.”

“He argued that the ban would handicap Democrats at a time when they need all the resources they can muster.”

Hey guess what? The Democrats weren’t handicapped last time. And they’re wiped out. So maybe taking that corporate lobbyist money is the handicap. You ever think about that? Because it skews your whole fucking reason for being.

Hillary Clinton outspent Donny Tiny Hands 2 to 1. And she lost! Again this whole idea that the Democrats?—and we talked about it when I interviewed Thomas Frank, “Listen Liberal”?—is that the Democrats their whole reason for doing this corporate money shit, for Bill Clinton getting in bed with Wall Street, the military-industrial complex, and Big Pharma, the whole reason Chuck Schumer said screw the workers, the working-class, the white workers, we’re going to pick up Republicans in the suburb, that’s our strategy, the whole reason for doing that is you’re going to win.

The whole reason for getting in bed like the Republicans with big business and Wall Street is because you’re going to win. But you’re not winning. This fucking theory it’s been blown out of the water. Money doesn’t equal win.

The Democrats have been taking corporate money since 1992, and before, and they’re getting their ass handed to them. They lost to Donald Trump. So I can’t believe people still say this stuff. That’s crazy.

“‘We do not have a president the White House,’ Mulholland said. ‘I am not a member of Mother Theresa’s sisters organization; I am a member of the Democratic Party.'”
And you’re completely bought and sold by corporations, you dummy. And I can’t I can’t imagine why … oh.

Panel: I was at one of those corporate gangbangs once and everybody just wanted to fuck me up the ass.

Jimmy Dore: I’m glad we took time out for that joke.

Panel: Why is he dragging Mother Teresa into this? Yeah I was wondering with that analogy, too. Where is he going with that?

Jimmy Dore: He is trying to say like, you guys are too pure. That’s what that is. I don’t belong to a purity organization. I’m a politician trying to win. You lost! Your way of doing things lost.

Panel: He really should have thought that through. I’m not part of a group that tries to help people. I’m a Democrat. Oh, that’s branding: needs some work there.

Panel: His words, his words.

Jimmy Dore: “New York DNC Member Stuart Appelbaum, a co-sponsor of the resolution, insisted that it was crucial for voters to believe the DNC is accountable to them, not corporate interests.”

It is crucial; they don’t think that.

“‘This resolution provides us an important opportunity to send a message to the people of this country as to our values,’ said Appelbaum, president of the Retail, Wholesale and Department Store Union. ‘It is not something new: we operated this way for seven years!’ Appelbaum added. referring to the Obama-era ban.” It’s not.

“Resolution 33 appears to be narrower than the ban on contributions from lobbyists and PACs imposed by Obama, explicitly banning donations only corporate PACs.”

That’s what this is. This isn’t about winning. It’s about keeping the corporate cash flow going. It isn’t about winning because you’re losing doing that. And they know they’re losing and they’re ok with that. They’re more okay with losing than they are with winning to a progressive.

“Ellison told Huffington Post in January that he would reinstate Obama’s ban on lobbyist donations. He subsequently walked back the promise, vowing only to make sure the measure was second and debated by the DNC’s executive committee.”

That’s what he said. We played that video out. He said we’re going to have a vote. We’re Democrats. I’m not going to make a decision. We’re going to vote about it.

So if we vote to be sellouts and be corrupted by corporate money, I’m going to go along with it. And he is.

That’s how bad the Democrats are. their big progressive, Keith Ellison, corporatist. Aaah, whatever, I’ll go along. Does that bother anybody else?

Panel: Yeah, the whole thing is super upsetting. It’s just ridiculous. It’s just like you keep saying, I mean, they aren’t Democrats. They are just Republicans with a different name.

Panel: But it’s so nice watching them all be besties. C’mon, that unity for all of us to learn from. I feel good.

Jimmy Dore: I do. I love it when Tom Perez and Keith Ellison go and do interviews together.

Panel: They need to get bracelets.

Jimmy Dore: “His chief opponent, former Labor Secretary Tom Perez, declined to say whether he supports the idea of such a ban.”

So there you go. You wonder what’s wrong with the Democrats?

Panel: He won’t even take a stand.

Jimmy Dore: He won’t even take a stand.

Jimmy Dore: Why do you think he won’t make a stand because his stand is obviously the wrong thing.

Panel: There is no transparency. That’s his answer.

So this is still more of the problem. Hey Democrats, what did you learn? We learned that we need to keep taking corporate money and be just like the establishment that thing that everyone hates. That’s what we learned.

William Brighenti is a Certified Public Accountant, Certified QuickBooks ProAdvisor, and Certified Business Valuation Analyst. Bill began his career in public accounting in 1979. Since then he has worked at various public accounting firms throughout Connecticut. Bill received a Master of Science in Professional Accounting degree from the University of Hartford, after attending the University of Connecticut and Central Connecticut State University for his Bachelor of Arts and Master of Arts degrees. He subsequently attended Purdue University for doctoral studies in Accounting and Quantitative Methods in Business. Bill has instructed graduate and undergraduate courses in Accounting, Auditing, and other subjects at the University of Hartford, Central Connecticut State University, Hartford State Technical College, and Purdue University. He also taught GMAT and CPA Exam Review Classes at the Stanley H. Kaplan Educational Center and at Person-Wolinsky, and is certified to teach trade-related subjects at Connecticut Vocational Technical Schools. His articles on tax and accounting have been published in several professional journals throughout the country as well as on several accounting websites. William was born and raised in New Britain, Connecticut, and served on the City's Board of Finance and Taxation as well as its City Plan Commission. In addition to the blog, Accounting and Taxes Simplified, Bill writes a blog, "The Barefoot Accountant", for the Accounting Web, a Sift Media publication.
View all posts by William Brighenti →
This entry was posted in Accountants CPA Hartford, Articles and tagged Bob Mulholland, Christine Pelosi, Debbie Wasserman-Schultz, Democratic National Committee, DNC, DNC members vote down corporate money ban, Donald Trump, Jimmy Dore, Keith Ellison, Resolution 33, Stuart Appelbaum, The DNC is a one big capitalistic gangbang of Democrats and corporate donors and lobbyists, Thomas Frank, Tom Perez, transcript, video. Bookmark the permalink.