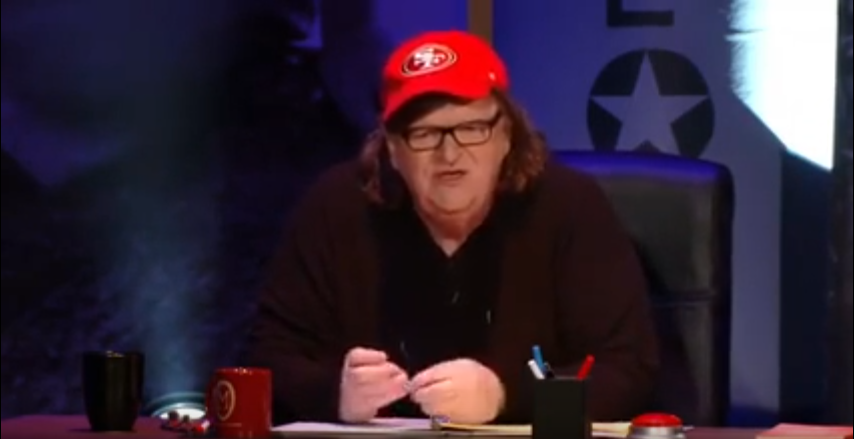 Transcript of speech given by Michael Moore on October 24, 2016 in Ohio

They’re not racist and rednecks. They’re actually pretty decent people. And so I wanted to, after talking to a number of them, I wanted to write this.

Donald Trump came to the Detroit Economic Club and stood there in front of the Ford Motor executives and said, if you close these factories as you’re planning to do in Detroit and build them in Mexico, I’m going to put a 35-percent tariff on those cars when you send them back, and nobody’s going to buy them.

It was an amazing thing to see. No politician, Republican or Democrat, had ever said anything like that to these executives, and it was music to the ears of people in Michigan and Ohio and Pennsylvania and Wisconsin, the “Brexit states”.

You live here in Ohio. You know what I’m talking about. Whether Trump means it or not is kind of irrelevant because he’s saying the things to people who are hurting.

And that’s why every beaten-down nameless forgotten working stiff who used to be part of what was called the middle class loves Trump. He is the human Molotov cocktail that they’ve been waiting for, the human hand grenade that they can legally throw into the system that stole their lives from them.

And on November eight, election day, although they lost their jobs, although they’ve been foreclosed on by the bank, next came the divorce, and now the wife and kids are gone, the cars been reposed, they haven’t had a real vacation in years, they’re stuck with the shitty Obamacare Bronze Plan when you can’t even get a fucking percocet, they’ve essentially lost everything they have except one thing, the one thing that doesn’t cost them a cent and is guaranteed to them by the American Constitution: the right to vote.

So on November eight, the dispossessed will walk into the voting booth, be handed a ballot, close the curtain, and take that lever or felt pen or touch screen, and put a big fucking X in the box by the name of the man who has threatened to upend and overturn the very system that has ruined their lives: Donald J Trump.

The enemy of my enemy is who I’m voting for on November eight.

Yes, on November eight, you, Joe Blow, Steve Blow, Bob Blow, Billy Blow, Billy-Bob Blow, all the Blows get to blow up the whole goddamn system because it’s your right.

The Trump election is going to be the biggest fuck you ever recorded in human history.

And it will feel good.

William Brighenti is a Certified Public Accountant, Certified QuickBooks ProAdvisor, and Certified Business Valuation Analyst. Bill began his career in public accounting in 1979. Since then he has worked at various public accounting firms throughout Connecticut. Bill received a Master of Science in Professional Accounting degree from the University of Hartford, after attending the University of Connecticut and Central Connecticut State University for his Bachelor of Arts and Master of Arts degrees. He subsequently attended Purdue University for doctoral studies in Accounting and Quantitative Methods in Business. Bill has instructed graduate and undergraduate courses in Accounting, Auditing, and other subjects at the University of Hartford, Central Connecticut State University, Hartford State Technical College, and Purdue University. He also taught GMAT and CPA Exam Review Classes at the Stanley H. Kaplan Educational Center and at Person-Wolinsky, and is certified to teach trade-related subjects at Connecticut Vocational Technical Schools. His articles on tax and accounting have been published in several professional journals throughout the country as well as on several accounting websites. William was born and raised in New Britain, Connecticut, and served on the City's Board of Finance and Taxation as well as its City Plan Commission. In addition to the blog, Accounting and Taxes Simplified, Bill writes a blog, "The Barefoot Accountant", for the Accounting Web, a Sift Media publication.
View all posts by William Brighenti →
This entry was posted in Accountants CPA Hartford, Articles and tagged 35% tariff, billionaires, breakfast states, Donald Trump, elite class, Ford Motor Company, Hillary Clinton, Michael Moore, Michael Moore Explains Why Donald Trump Will Win! And Why He Should!, Michael Moore says the middle class needs to vote for Donald Trump to oppose the elites and Corporate America and Wall Street and career politicians and the media, Michigan, middle class, millionaire class, November 8, Obamacare Bronze Plan, October 25 2016, Ohio, Pennsylvania, the 1%, the 99%, the career politicians, the media, transcript, Transcript of speech given by Michael Moore on October 24 2016 in Ohio, Trump is the human hand grenade that the middle class can throw at the elite class and system, Trump is the human hand grenade that they can legally throw into the system that stole their lives from them, Trump is the human Molotov cocktail that the middle class can throw at the system, Wisconsin. Bookmark the permalink.